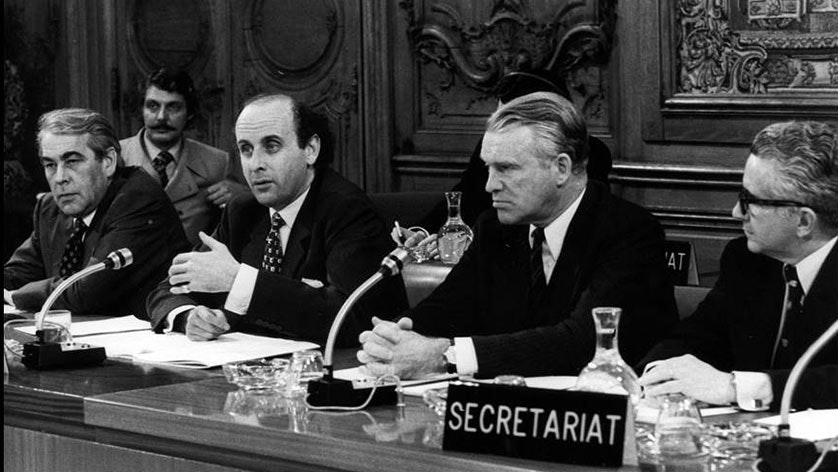 Signature of the Agreement Establishing the IEA, 18 November 1974.

Created in 1974 to ensure the security of oil supplies, the International Energy Agency has evolved over the years. While energy security remains a core mission, the IEA today is at the center of the global energy debate, focusing on a wide variety of issues, ranging from electricity security to investments, climate change and air pollution, energy access and efficiency, and much more.

The IEA was born with the 1973-1974 oil crisis, when industrialised countries found they were not adequately equipped to deal with the oil embargo imposed by major producers that pushed prices to historically high levels.

This first oil shock led to the creation of the IEA in November 1974 with a broad mandate on energy security and energy policy co-operation. This included setting up a collective action mechanism to respond effectively to potential disruptions in oil supply. The framework was anchored in the IEA treaty called the “Agreement on an International Energy Program,” with newly created autonomous Agency hosted at the OECD in Paris.

The IEA was established as the main international forum for energy co-operation on a variety of issues such as security of supply, long-term policy, information transparency, energy efficiency, sustainability, research and development, technology collaboration, and international energy relations.

The IEA’s collective emergency response system mechanism ensures a stabilizing influence on markets and the global economy. It was activated five times since the Agency’s creation. The first was in January 1991, during the First Gulf War. The second was in 2005, after the hurricanes Katrina and Rita damaged oil infrastructure in the Gulf of Mexico. The third was in 2011, during the Libyan crisis. The fourth and the fifth were in 2022, after Russia invaded Ukraine.

While energy security remains a core mission, the IEA has evolved over the years, adapting to the transformation of the global energy system. Today, the IEA is at the heart of global dialogue on energy, providing authoritative statistics and analysis and examining the full spectrum of energy issues, advocating policies that will enhance the reliability, affordability and sustainability of energy in its 31 members countries and beyond.

The modernization of the IEA was structured under three pillars: strengthening and broadening the IEA’s commitment to energy security beyond oil, to natural gas and electricity; deepening the IEA’s engagement with major emerging economies; and providing a greater focus on clean energy technology, including energy efficiency.

The Agency’s successful “open door” policy allowed the IEA to deepen its collaboration with 10 new countries through the Association progamme: Argentina, Brazil, China, Egypt, India, Indonesia, Morocco, Thailand, Singapore, and South Africa. The IEA family now represents about 75% of global energy consumption, up from 40% in 2015.

Past and present leadership