The Belgian electricity sector will undergo major changes in the next decade. The share of renewables in the electricity generation mix is expected to almost double, from an estimated 20.9% in 2020 to more than 37% in 2030. Belgium’s federal Law of 31 January 2003 requires the phase-out of all nuclear electricity generation in the country. In light of the Russian invasion of Ukraine and goals to reduce fossil fuel dependency, the federal government decided in March 2022 to amend the law to extend 2 GW of nuclear capacity by ten years.

Belgium has a well-developed and highly interconnected electricity system serving domestic demand and supporting the European electricity market. Belgium’s electricity network is one of just a few networks in the world to make extensive use of dynamic line rating (DLR), which uses distributed sensors to provide real-time monitoring of high-voltage electricity lines. DLR allows the transmission system operator (TSO) to better determine actual line capacity and improve overall system performance. In 2020, the TSO was using DLR on 28 high-voltage lines and estimated it had increased import and export capacity by around 10%, resolved congestions issues, reduced redispatching costs and aided the development of renewable generation.

The private company Elia is Belgium’s electricity TSO. It is owned by the Elia Group, which also owns German TSO 50Hertz. Around 48% of the shares of the Elia Group are held by two public holding companies (Publi-T and Publipart), which are owned by Belgium’s municipalities.

Belgium’s pumped hydro storage (1.31 GW in 2020) plays an important role in system balancing. Belgium has limited battery storage capacity. There are no official consolidated data on battery storage, as this is not yet part of the mandatory energy statistics. A first unverified compilation of operational battery projects used for grid balancing was conducted in September 2021 and estimated capacity around 32.5 MW/30 MWh. However, the government indicated that this estimate is likely well below the actual capacity of operational battery storage. Belgium’s battery storage capacity is expected to increase, as a 25 MW/100 MWh system is planned for 2022. 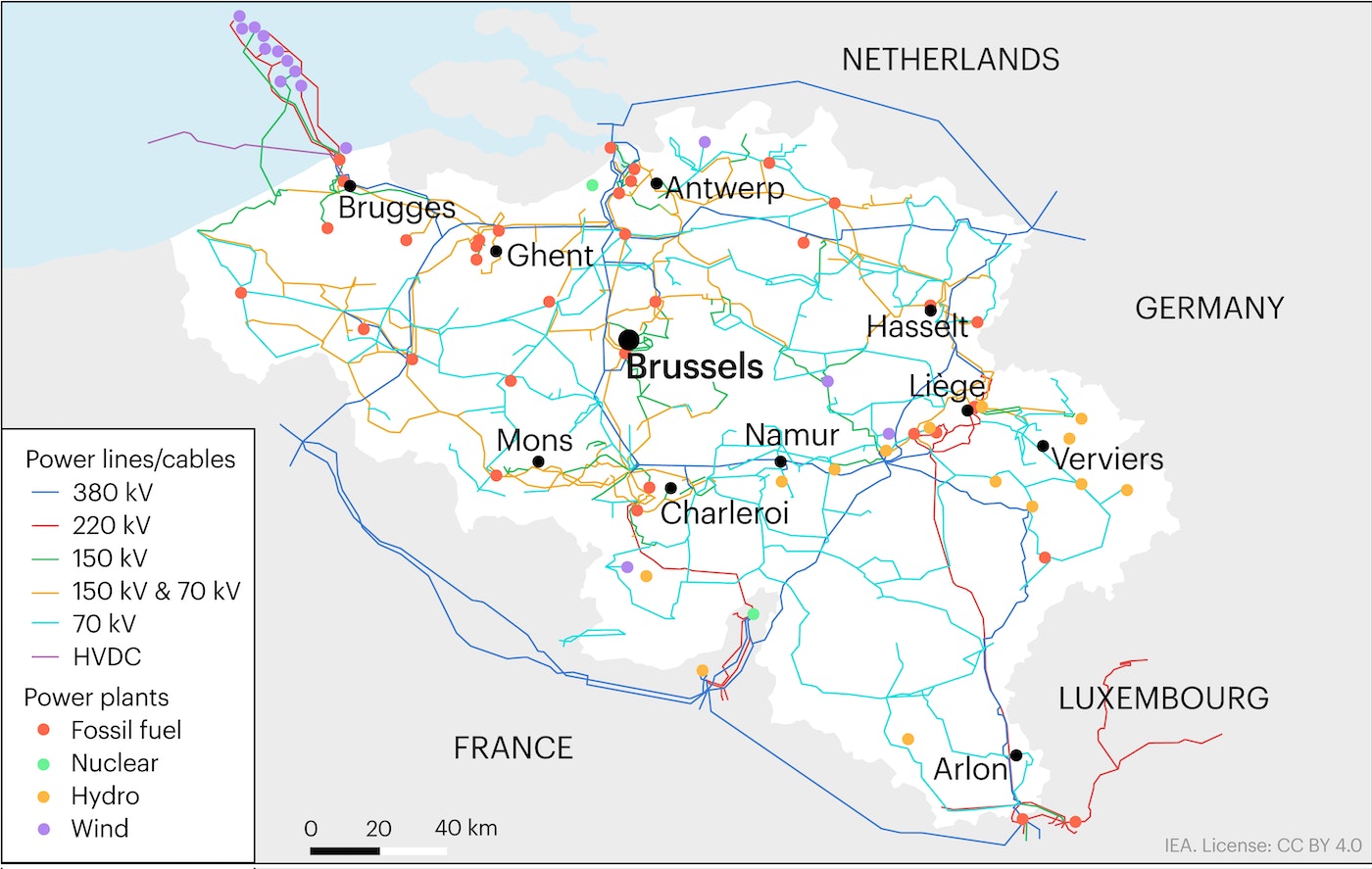 The Federal Grid Code creates a legal basis for the Ministerial Decree of 3 June 2005 on the establishment of the load-shedding plan, which is embedded in the System Defence Plan developed by Elia. To ensure a level of risk preparedness at the level of the TSO, the federal Minister for Energy is granted approval authority concerning the TSO’s System Defence Plan, the Restoration Plan and the Test Plan, pursuant to the Federal Grid Code.

In line with requirements imposed by the EU Risk Preparedness Regulation, Belgium has developed numerous electricity crisis scenarios to assist in identifying the necessary emergency response measures to deal with electricity shortfalls. The procedures for dealing with very short-term, sudden shortfalls have to be updated in light of structural changes in the crisis management legal framework.

In the event of an emergency situation within the Belgian electricity system, a load‑shedding plan can be activated, with the Decree of 3 June 2005 setting rules on the order for disconnecting and reconnecting consumers.

Belgium’s total electricity generation capacity was 23.85 GW, with two nuclear plants accounting for 25%, followed by natural gas (24%), solar PV (23%), wind (20%), hydro (6%), and small shares from bioenergy and oil. Ownership of Belgium’s generation capacity is highly concentrated. From 2013 to 2020, there was an increase in total installed capacity (+2.9 GW) and a notable shift in the mix of generation assets, with a large increase in wind and solar PV capacity offset by reduced capacity for natural gas, coal, oil and biomass.

Most of Belgium’s generation capacity is composed of large-scale generation assets (centralised plants or large wind and solar PV parks) connected to the electricity transmissions system (around 16 GW). However, a notable share of capacity (around 8 GW) is connected at the distribution level and this capacity has been increasing, especially small-scale distributed solar PV systems connected to the low‑voltage networks.

After a tender process based on rules set by Elia in consultation with the market players, the Commission for Electricity and Gas Regulation (CREG) and the federal government, the volumes and prices of the reserves can be imposed on the selected tenderers for the required period. The remuneration varies, depending on whether the suppliers are offering SGR or SDR. The remuneration for the SGR covers the expenses incurred by the supplier for keeping fuel available and generating the energy at Elia’s request. For the SDR, suppliers are remunerated for the availability of the contracted capacity and for the activation of the SDR.

In recent years, Belgium has taken steps to enhance resilience of the electricity system to cyber-attacks. The central authority for cybersecurity in Belgium is the Centre for Cyber Security Belgium (CCB), which was created by Royal Decree of 10 October 2014, and is under the authority of the Prime Minister.

The main regulatory framework for cybersecurity is the law of 7 April 2019 for the security of network and information systems of general interest for public safety (“NIS law”), which implements the EU NIS Directive (Directive 2016/1148). All entities designated as so-called “operators of essential services” within a range of sectors including the energy sector, must adopt adequate protective measures against cyber-attacks, and are subject to inspections and are required to notify cybersecurity incidents.