Belgian gas demand has fluctuated around 18 bcm over the past decade, led by industry, which accounted for approximately 40% of total gas demand, followed by electricity and heat generation, residential buildings, and service sector buildings. Gas demand in power generation is expected to increase in the coming years, as the majority of the nuclear plants will close.

Belgium maintains a high degree of natural gas supply security through a combination of several measures, including underground commercial gas storage and well-established safety standards of the supply infrastructure. Belgium’s natural gas emergency response policies are in line with EU Regulation 2017/1938 concerning measures to safeguard the security of gas supply (“the SoS Regulation”).

Belgium’s well-developed and highly interconnected natural gas network supplies domestic gas demand and acts as a hub supporting flows between France, Germany, Luxembourg, the Netherlands and the United Kingdom and to the broader European market. Belgium has two gas transmission systems: one for receiving, transporting and distributing L-gas, and another for H-gas (high-calorific gas). Belgium is in the process of converting its L-gas network to support H-gas, which is expected to be completed by 2024.

The gas transmissions system operator (TSO)’s indicative investment plan for 2020-2029 aims for a total investment of EUR 644 million in the gas transmission network, the Zeebrugge LNG terminal and the Loenhout storage facility. The main elements of the plan are conversion of the L-gas network to H-gas, infrastructure to support new gas-fired power stations expected as a result of the reduced nuclear production, the increase in LNG regasification capacity at the terminal in Zeebrugge, and adaptation and modernisation of the network.

Belgium has two natural gas transmission networks, one for H-gas and another for L-gas, which are physically separate and operated independently from each other by the gas TSO. Belgium’s combined H-gas and L-gas transmission networks are composed of 4 000 km of high-pressure gas pipelines that supply gas directly to over 230 large industrial end users and power stations and over 70 receiving stations that supply Belgium’s gas distributions networks. The network has three main high-pressure pipelines to transport gas within Belgium and to neighbouring countries. The VTN-RTR H-gas pipeline is bi-directional and runs from the interconnection with the United Kingdom and the Zeebrugge LNG terminal to interconnections with Germany and the Netherlands. The Segeo H-gas pipeline runs from the Netherlands to France. The Poppel-Blaregnies pipeline supplies L-gas from the Netherlands to Belgium and France.

Belgium has one LNG terminal located in the Port of Zeebrugge, which supplies Belgium and the European market with H-gas. It is operated by Fluxys LNG, which completed a major expansion of the terminal in December 2019, adding a fifth storage tank with an LNG storage capacity of 0.18 mcm. Following the expansion, the terminal’s LNG storage capacity increased from 0.39 mcm to 0.57 mcm (around 347 mcm of natural gas). The LNG infrastructure in Zeebrugge has an annual throughput capacity of 9 bcm. The LNG terminal can handle LNG carriers with LNG capacities from 0.08 mcm to 0.27 mcm.

Fluxys LNG is considering increasing the Zeebrugge Terminal regasification capacity. The Indicative Investment Plan of Fluxys Belgium and Fluxys LNG 2021-2030 expects construction of new regasification capacity to increase the stand-alone send out capacity to 8.2 gigawatt hours per hour (GWh/h) and then up to 10.5 GWh/h. The final investment decision for the increased stand-alone send out capacity was taken by Fluxys LNG in February 2021; the commissioning of the first step is expected early 2024 and the commissioning of the second step early 2026.

The Loenhout storage facility gives suppliers a flexible source of natural gas and allows them to ensure the continuity of deliveries to end users. Belgium does not have any storage for L-gas, other than line-pack. Currently, Belgium uses the Dutch L-gas fields as swing supplier to provide flexibility in L-gas supply.

As mentioned above, Belgium has two separate gas networks: one for H-gas and one for L-gas. This division of two networks is an important factor when considering secured gas supply and network resilience of Belgium. The N-1 indicator1 is applied by distinguishing between H-gas and L-gas networks in Belgium. For H-gas, the Belgian network holds multiple entry points and is fully capable of meeting an exceptional peak demand, even if the most important injection point (the interconnector Zeebrugge Terminal) is out of service, with the N-1 factor – a ratio to assess an infrastructure’s ability to meet domestic demand in case of a disruption – at 273% in 2018.

For the L-gas network, there is only one entry point on Belgian territory, just as there is only one supplier country, the Netherlands, with the N-1 factor at 18% in 2018. However, the interconnection point supplying the Belgian network with L-gas is, in fact, made up of two underground pipelines. According to the latest Preventive Action Plan, the probability of both pipes being simultaneously taken out of service is fairly limited, even in the event of a major accident with a rupture of one of the two pipes and an explosion. Applied to each of the pipes individually and given that both pipes have the same transport capacity, the N-1 indicator leads to ratios of 81%. 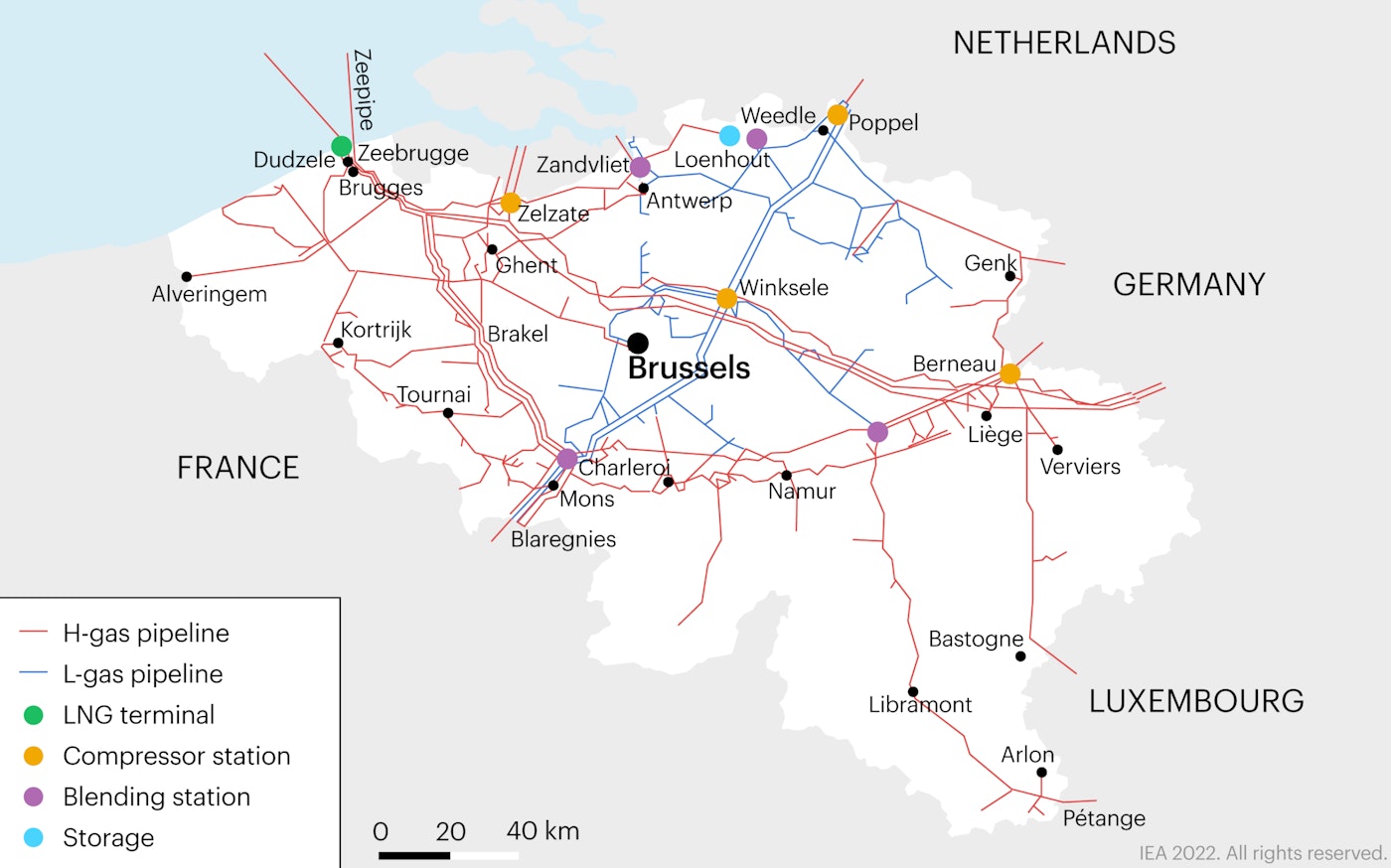 The Directorate General for Energy (DGE) establishes regional and national risk assessments, and based on those assessments it prepares a National Preventive Action Plan and an Emergency Plan as part of the emergency planning at national, regional and EU level, in concertation with the Commission for Electricity and Gas Regulation (CREG) and the TSO (Fluxys Belgium). These assessments and plans are revised every four years unless the circumstances warrant a more frequent update. Also, the Law of 12 April 1965 on the transport of gaseous and other products by pipelines (“Gas Act”) designates the DGE as the competent authority to ensure the implementation of the measures provided for in the SoS Regulation. In the event of a threat to the gas market, the Gas Act authorises the implementation of necessary safeguard measures.

The DGE is the competent authority for the security of gas supply and co-ordinates emergency planning and communication with government agencies and supranational institutions. The TSO has the responsibility to manage the response to a national gas emergency and is the first to give practical instructions to the shippers and suppliers to adjust the gas flows as foreseen in the specific emergency plan.

Gas security in Belgium is supported by a variety of emergency response measures, including both supply-side and demand-side measures. The Emergency Plan defines three levels of gas crisis: early-warning level, alert level and emergency level. The DGE or Fluxys is responsible for declaring an emergency as well as the crises level. During an emergency, top priority is given to supplying gas to protected consumers, mainly residential consumers and other consumers providing critical services.

At the early-warning level, there will likely not be any immediate intervention by the competent authority, relying instead on market-based measures. Network users are required to take measures to help balance the grid, such as increase imports and/or reduce exports, temporarily suspend storage injections, and calls on interruptible supply contracts. All measures and procedures available at the early‑warning level are still applicable at the alert level. In addition, in case of an alert level, the TSO may request network users to voluntarily alter their nominations as far as possible in order to safeguard the security of gas supply to protected customers in particular.

The emergency level will be activated by the TSO when the market-based measures alone are no longer sufficient to guarantee contracted gas supplies to all end consumers. A number of measures can be applied, including the call to reduce natural gas consumption, constraint on firm capacity or curtailment of non-protected customers, enforced withdrawal of gas in storage.

There are no requirements for Belgian gas companies to keep emergency gas reserves. Companies with contracts for gas storage in Belgium are obliged to fill at least 90% of contracted storage volumes by 1 November each year, and to maintain a level of gas storage above 30% of their contracted volume until 15 February.

The N-1 criterion is an indicator to evaluate the supply resilience of a network. A network complies with this indicator if it has enough technical capacity to satisfy total demand in the event of disruption of the single largest component of the infrastructure.