Most of Canada’s electricity systems are part of the integrated North American market, with 98% of Canadians connected to the continent’s bulk power system. Electricity is regularly traded in both directions between Canada and the United States (‘US’ hereafter) (with Canada a net exporter to the US overall). This robust interconnectivity with 37 north-south cross-border transmission lines adds to the east-west tie lines across provincial borders, and allows for a high degree of reliability and resilience to seasonal or unplanned changes in supply and demand.

Electricity security in Canada is therefore closely intertwined with that of the US. The reliability, situational awareness and emergency preparedness of the network is underpinned by standards, practices and procedures of the North American Electricity Reliability Corporation (NERC), which have been approved and implemented by most of Canada’s provinces. In the event of a major disruption, NERC would coordinate response efforts among industry participants, and with state, federal, and provincial governments in the US and Canada.

Canada has one of the cleanest electricity systems in the world, with most of its generation in 2019 coming from non-emitting sources, including hydro, other renewables and nuclear. Canada’s longer-term trajectory to reach net zero emissions in 2050 calls for electrifying much of its fossil fuel dominated sectors, such as transportation, buildings, industry, and oil and gas production, while also further increasing the integration of variable renewables.

In Canada, one transmission provider dominates each province, so transmission tariff pancaking (the accumulation of transport charges as power moves across different systems) can only occur for interprovincial trade, but given the large size of most provinces, cross-jurisdictional transfers of electricity are not as common as in countries where there are numerous transmission-owning parties.

A strategy adopted in the US to eliminate pancaking is to put all the transmission providers under the control of a single system operator in the form of a regional transmission operator (RTO) or independent system operator (ISO). Market participants within an RTO/ISO region pay only a single transmission tariff, whether they are moving power within a single utility or across several utilities in that region. For trade purposes, Manitoba Hydro participates in the Midcontinent Independent System Operator.

The US requires any Canadian utility wishing to sell electricity directly to customers in the US at market-based prices to provide reciprocal open transmission access for US companies to Canadian electricity customers. As such, many Canadian transmission providers have filed an Open Access Transmission Tariff (OATT) with the US regulator, the United States Federal Energy Regulatory Commission.

The procedure for connecting new capacity to the grid varies from province to province. Although independent power generators have access to the wholesale markets in Quebec, Manitoba, Saskatchewan and Nova Scotia, administration of connections to provincial grids and OATT has been left to the province's incumbent utility.

Canada’s Atlantic regions have made important strides to enhance the transmission and use of clean power across the region. The completion of the Muskrat Falls hydroelectric station in Labrador, the Labrador–Island (subsea transmission) Link and the Maritime Link between Nova Scotia and the island of Newfoundland, will both reduce Labrador’s own emissions and begin supplying clean electricity to its neighbours and beyond.

Major transmission and infrastructure upgrades are planned across Canada, including major lines in British Columbia, Alberta, Saskatchewan, Manitoba and Quebec.

The Canadian transmission network extends over 160 000 km. It is characterised by north-south backbones, in part due to the location of most major load centres near the Canada-US border and major hydro projects in the northern regions of British Colombia, Manitoba, Ontario and Quebec. In all regions of the country, transmission upgrades are required to accommodate greater load, more generation points, enhanced interprovincial and international trade, and reliability. Transmission planning is a provincial responsibility.

There are currently 37 interconnection points between Canada and the US, with several additional lines currently under construction or proposed. This allows Canada to export around 10% of its electricity generation and for the US to cover about 2% of its demand with Canadian imports.

The dominant role that hydroelectricity plays in several provinces, along with the fact that many Canadian hydro projects are large and have sizeable reservoirs, will significantly assist the integration of variable generation, particularly at the energy management or network-wide level. In this regard, hydro’s role is expected to evolve from primarily baseload towards offering multiple contributions to the North American continental grid, including ancillary services and large-scale storage.

In other Canadian provinces, in the absence of further policy action, natural gas is expected to become an increasingly important fuel in electricity generation, particularly given the planned phase out of coal-fired generation. Natural gas turbines can complement variable generation given their fast-ramping capabilities.

The government also sees nuclear playing an important role in providing flexibility and versatility to the grid. Ontario and New Brunswick have developed experience in flexible operation of existing nuclear plants, especially the Bruce nuclear power plant in Ontario. Innovative ways to provide more flexibility in nuclear systems are under development, for example with advanced and small modular reactors.

With respect to load management/shifting, utility-led energy efficiency programmes are often primarily directed at peak demand reduction as opposed to overall reduction in energy use. There are load shifting initiatives, such as the use of load control devices, in most jurisdictions with energy efficiency programmes. In Canada, most provinces offer time-of-use (TOU) pricing plans only for industrial customers, with the exception of Alberta and Ontario, where TOU rates are mandatory for residential customers. Ontario has the most focus on peak load reduction and also leads in the deployment of smart meters (a prerequisite for TOU pricing).

Smart grids are expected to play a role in facilitating greater integration of wind and solar power into Canada’s electricity systems. Across Canada, more than 82% of installed meters are smart. Although every province and territory in Canada has begun deployment of advance metering infrastructure, from province to province there are varying levels of development, where British Columbia and Ontario already have full deployment of smart meters. 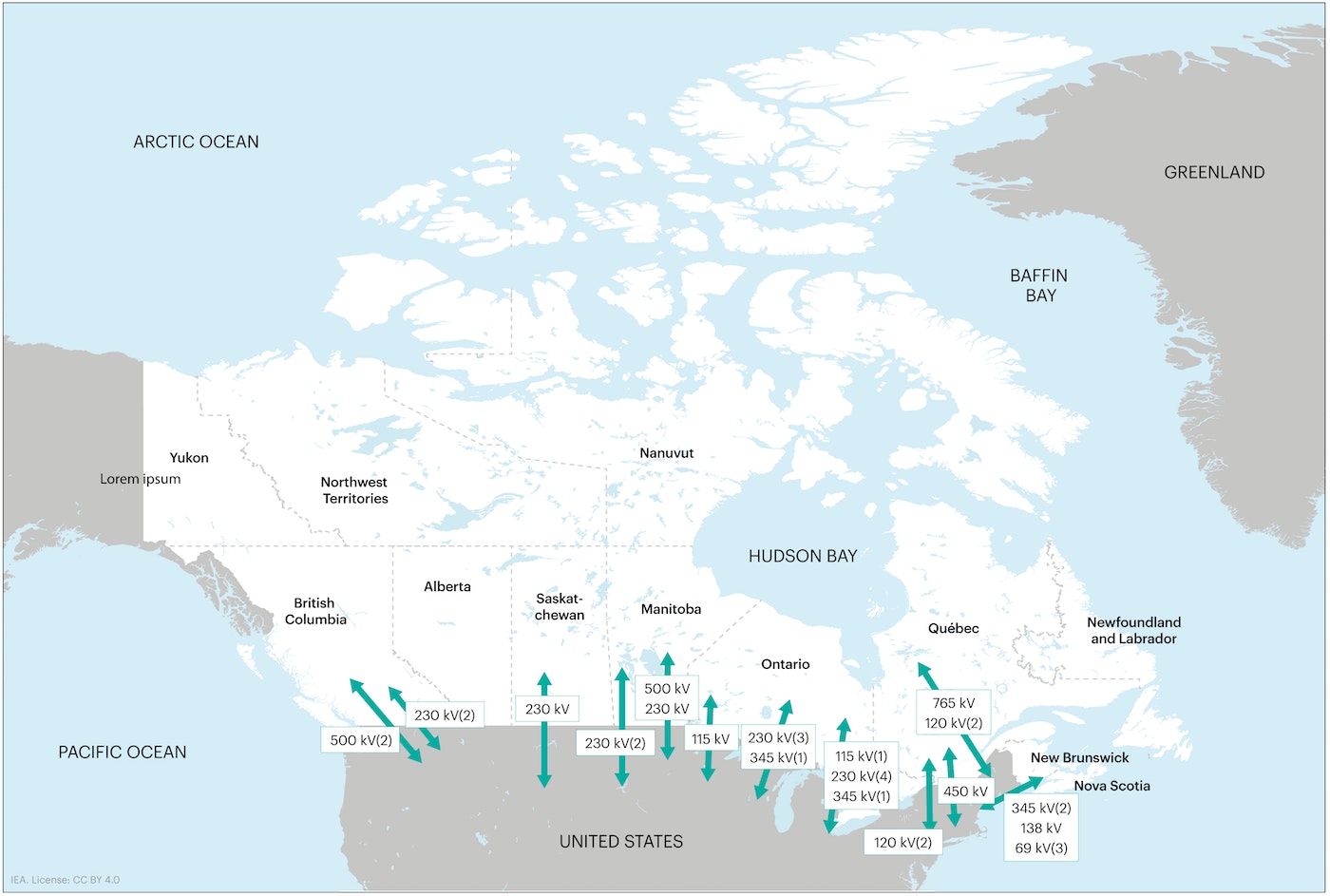 In Canada, the provinces are responsible for recognising the NERC and its regional entities such as the Electric Reliability Organization, adopting NERC Reliability Standards, and establishing measures to monitor and enforce standards. While the process for approving NERC Reliability Standards varies among Canadian jurisdictions, the standards (occasionally modified based on a jurisdictions' reliability regime) are mandatory and enforceable in British Columbia, Alberta, Saskatchewan, Manitoba, Ontario, Quebec, New Brunswick and Nova Scotia. Enforcement varies among the provinces, with monitoring and enforcement authority ultimately resting with provincial regulators.

NERC reliability standards include those pertaining to emergency management. NERC’s regional entities oversee the day-to-day operation of the North American Bulk Electric System and would be the first to work with generation and transmission owner/operators to resolve an energy and production emergency in the electricity sector. NERC’s role in a blackout or other major bulk electric system disturbances or emergencies is to provide leadership, coordination, technical expertise, and assistance in the prompt and safe restoration of the bulk electric system. Working closely with its regional councils and reliability coordinators, NERC would coordinate efforts among industry participants, and with state, federal, and provincial governments in the United States and Canada to support response to major events.

NERC conducts Long-Term Reliability Assessments annually, which assess the adequacy of the Bulk Electric System in the United States and Canada over a 10-year period. The reports project electricity supply and demand, evaluate transmission system adequacy, and discuss key issues and trends that could affect reliability. It also prepares Summer and Winter Assessments, which assess the adequacy of electricity supplies in the United States and Canada for the upcoming summer and winter peak demand periods.

NERC expects that overall electricity generation capacity in North America will be sufficient to maintain reliable service, provided new generation is added as planned. However, there are a number of issues that may affect the long-term reliability and effectiveness of the system:

In the short- and medium-term, Canada does not face generation adequacy concerns. With its installed capacities of electricity generation from hydro, nuclear and natural gas, the country as a whole enjoys comfortable capacity margins to meet domestic demand at all times, even after phasing out conventional coal-fired electricity by 2030.

The Canadian electricity market will need new investments in both generation and transmission post 2030. While the situation varies from province to province, certain markets will face capacity shortfalls in the next 10-15 years to meet rising demand for the electrification of transport, industry and residential heating.

Total transmission miles are projected to increase substantially over the coming years as electrical interconnections (both inter-provincially and internationally) are increasingly seen as a low-cost solution to meet both power demand and reduce GHG emissions. However, siting of interprovincial and international interconnections remains a challenge due to the various permits required from the provinces or US states the line traverses.

As part of Canada’s Strengthened Climate Plan, the government committed to work with provincial, territorial and municipal governments, Indigenous Peoples, and other key partners to develop Canada’s first-ever National Adaptation Strategy. The strategy would establish a shared vision for climate resilience in Canada, identify key priorities for increased collaboration and establish a framework for measuring progress at national level. This work will help inform where the government should best target its policies, programmes and investments going forward.

Canada has implemented a comprehensive approach to critical energy infrastructure security, framed under three pillars: prevention, preparedness, and response and recovery, with international cooperation at the heart of all three. As part of their efforts to protect critical infrastructure in North America, Canada and the United States will implement a Framework for Collaboration on Cybersecurity in the Energy Sector to enhance the security and resiliency of cross-border energy infrastructure.

The government of Canada in 2018 established the Canadian Centre for Cyber Security and committed CAD 507.7 million (Canadian dollars) over five years in 2018, and CAD 108.8 million annually thereafter to develop and implement a new National Cyber Security Strategy. This includes CAD 10 million specifically to help strengthen the cybersecurity and resilience of Canada’s domestic and cross-border energy infrastructure. The Cyber Centre collaborates closely with NRCan, which includes gathering actionable cyber threat intelligence and informing energy sector stakeholders. NRCan engages with energy sector owners and operators to improve the sector’s cybersecurity and resilience. This includes designing and conducting exercises, as well as co-chairing the Energy and Utilities Sector Network (EUSN), a public-private forum to share intelligence and best practices to increase the sector’s resilience. Through the Cyber Security and Critical Energy Infrastructure Program it aims to strengthen the capability of the energy sector to prevent, prepare, respond to and recover from cyber threats by funding research projects.