Canada’s policy for emergency gas response, similar to that for oil, reflects its role as a major producer and net exporter, with vast volumes of gas supplies in a well-integrated market with extensive pipeline networks both within Canada and across the border with the United States. In this context, Canada’s gas emergency policy is generally geared towards short-term regional or local disruptions rather than a more widespread or long-lasting supply outage.

The gas industry itself has the primary responsibility for ensuring security of supply and responding to an emergency, while local, municipal and provincial authorities would respond when the industry is unable to adequately resolve the disruption in a timely manner. The federal government would take direct action to manage crisis response at the request of the provincial authorities or in the case where a national emergency is declared.

Significant investments have been made in natural gas infrastructure since 2016, reflecting growth of the Montney basin in Northeast British Columbia and Northwestern Alberta, as well as other shale basins in western Canada. These have been primarily focused on expanding one of Canada’s main pipeline systems, TransCanada’s Nova Gas Transmission Limited (NGTL). The NGTL system, which delivers 75% of Alberta and British Columbia’s natural gas production to national and export markets, is currently undergoing a CAD 9.9 billion (Canadian dollars) expansion programme to address bottlenecks and capacity constraints in the long term. Despite significant build out, challenges remain in natural gas distribution from producers to consumers.

Due to bottlenecks on the NGTL, there has been increased volatility for AECO, Alberta’s natural gas trading price benchmark. These bottlenecks have drawn further attention to upstream infrastructure constraints, such as the lack of distribution and production capacity, and punctual instances of a widening price differential with the United States.

In September 2019, the Canada Energy Regulator (CER) approved a Temporary Service Protocol for the NGTL system until 31 October, 2020 (a request to extend this by an additional year was denied by CER). The protocol changed the approach to curtailment on the system during times of maintenance. Although it was never used, the protocol, along with small incremental expansions on the NGTL system, are credited with reducing price volatility and narrowing the differential with the United States. However, additional pipeline transportation capacity is needed to permanently address price volatility, and some new capacity expansions are proposed and already underway. NGTL has proposed two expansion projects (North Corridor and Edson Mainline) that are currently under federal review and, if approved, would ease bottlenecks. In addition, the federal government recently approved the NGTL 2021 expansion with a capacity of 1.45 billion cubic feet per day (bcf/d; 41 million m3/d).

Canada has one operational liquefied natural gas (LNG) import terminal – the Canaport facility in Saint John, New Brunswick on the country’s east coast. The facility has a maximum send out capacity of 28 million m3/d (1.2 bcf/d). LNG imported from abroad, through this facility serves markets in Atlantic Canada and the United States northeast.

The LNG Canada facility in Kitimat, British Columbia, is currently the only export project under construction and is expected to begin exporting in 2025. Phase one of the CAD 40 billion LNG Canada liquefaction and export terminal is under construction and due to begin exporting 14 million tonnes of LNG per year (mtpa) by 2025, with an option to expand to 28 mtpa in a future second phase. The Coastal GasLink pipeline project will supply natural gas to the LNG Canada facility, and is due for completion by 2023.

A number of initiatives for new LNG facilities and pipelines to deliver natural gas to these facilities have been proposed over the last decade, as Canadian producers have been seeking overseas markets for their natural gas. The vast majority of these projects are in British Columbia, linked to shale and tight gas developments in Alberta and British Columbia. There are also east coast proposals in Quebec, Nova Scotia and Newfoundland and Labrador.

As of 2020, Canada had 27 billion cubic metres (bcm) natural gas storage capacity, with total peak output capacity of 322 million m3/d. Roughly two-thirds of the storage facilities are located in western Canada, mostly in Alberta, and are typically owned by pipeline companies or producers (except Saskatchewan where all storage facilities are owned by the Crown Corporation, TransGas).

Most underground gas storage facilities in Canada are repurposed depleted oil and gas fields. Gas is also stored in underground salt caverns, but these account for only 2% of the underground storage capacity in Canada. 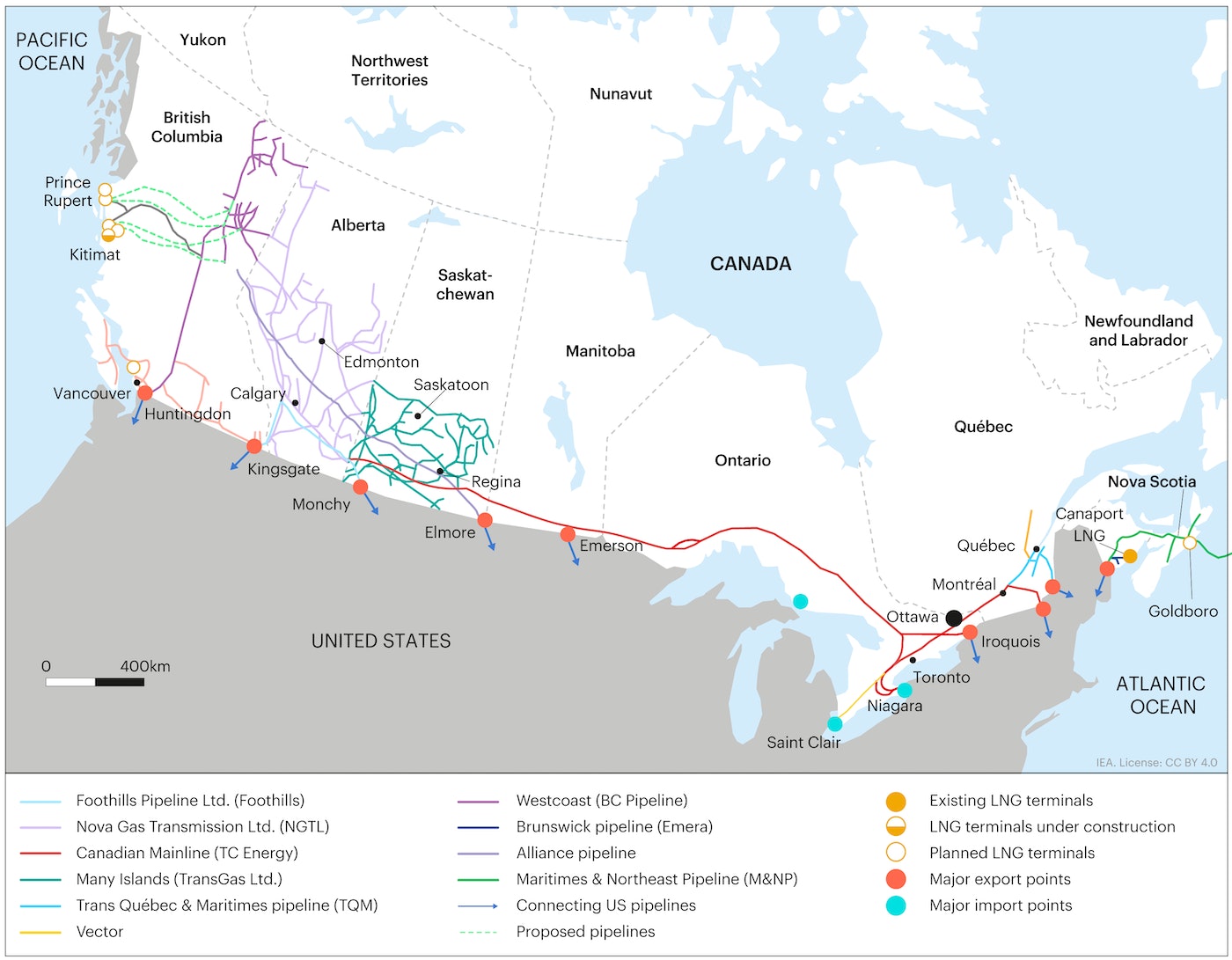 During a natural gas supply disruption (or potential disruption), the natural gas industry is responsible for the initial response – including coordinating emergency response activities and performing all remedial work. Natural gas pipelines are continuously monitored by industry players from centralised control centres that collect real-time data on pressure, volume and other variables.

The CER is the lead agency on federally regulated facilities or operations and has its own Emergency Management Program in place to establish a prompt and coordinated response to an incident. The Strategic Petroleum Policy and Investment Office within Natural Resources Canada (NRCan) is responsible for providing policy advice and recommendations for natural gas security related issues.

The Canadian government does not have any policies to encourage or require short-term fuel-switching in the natural gas consuming sectors during a supply disruption, and the country has limited capacity in this regard. There are no requirements for power generators to maintain stocks of alternative fuels. While it may be possible for some electricity generators to switch to different fuels in a scenario where natural gas is unavailable, a natural gas supply disruption would most likely be handled by using other forms of power generation, such as nuclear or hydro to meet demand, given that gas represented only 11% of total electricity generation in 2020.

Fuel-switching capacity exists in some industrial facilities, where the alternative fuels would be oil, coal or wood and the primary motivation for such a switch would be price variations. There are no government requirements to maintain specific stocks of alternative fuels.

Although there are no government-owned strategic natural gas reserves in Canada and no government-imposed stockholding obligations for market participants, the country’s natural gas industry has significant commercial natural gas storage infrastructure that is primarily used to service peak winter demand. Total commercial stocks in Canada during the winter months over the last 5 years have ranged between 40 and 70 days of forward demand. These storage volumes can be drawn down at very short notice when needed.

In the event of a domestic gas supply disruption, Canada could import additional quantities of gas via pipeline from the United States or, in the event of a prolonged disruption, could also bid on LNG spot cargoes, to be received at the Canaport LNG terminal.

Many large industrial natural gas consumers (including some electricity generators) have “interruptible” service contracts, meaning that their natural gas supplies can be diverted elsewhere, if required.