Canada’s oil emergency response policy reflects its role as a major net exporter of oil. As such, Canada does not have an IEA stockholding obligation, does not hold any public emergency oil stocks, nor does it impose stockholding obligations on industry. With a robust oil industry and supply infrastructure, Canada’s emergency policy relies primarily on a well-functioning market to ensure supply security, while at the same time reflecting the jurisdictional authority of provinces and territories over energy resources. In an IEA collective action, Canada would likely contribute with demand restraint measures, either with the federal government coordinating voluntary steps by the provinces and territories, or by mandating implementation under a declared national emergency.

In recent years, crude oil production has grown faster than pipeline capacity. Between 2013 and 2016, about 1 mb/d of nameplate pipeline capacity was added in Canada. No incremental nameplate capacity has since been added while several expansion projects were terminated. In addition to the termination of the Keystone XL project in 2021, the Energy East project was cancelled by the proponent in 2017 and the Northern Gateway project was dismissed by the government in 2016. However, in 2019, the federal government approved the Trans Mountain Expansion project, a twinning of the existing 1150 km Trans Mountain Pipeline between Edmonton, AB and Burnaby, BC that will greatly increase the pipeline’s current capacity. Construction is underway, and is expected to be in-service as soon as December 2022.

While no major projects to connect with pipelines in the United States have been completed since 2016, several optimisations and capacity increases, notably on the Enbridge Mainline system, have been carried out. These includes Enbridge Line 67 capacity increase to 800 thousand barrels per day (kb/d) which has alleviated some pressure for oil transportation, particularly the need to ship crude by rail. In recent years, pipeline companies have also steadily increased capacity and throughputs on their pipeline systems through the addition of Drag Reducing Agents and pumping power.

There are 15 refineries in Canada with a combined crude processing capacity of 1.95 mb/d. In comparison, Canada’s average daily consumption across sectors amounts to 6.0 kb/d. Canadian refineries are divided into three main market orbits:

The Sturgeon Refinery Project in Alberta is the first refinery built in Canada since the 1980s and is configured to process diluted bitumen into ultra-low sulphur diesel. The refinery is equipped to capture and sequester 1.2 million tonnes of CO2 each year, lowering the carbon intensity of fuels produced at the refinery.

There are no other major refining projects planned in Canada, as product demand is expected to decline slightly over the coming years. The Come by Chance refinery in Newfoundland has been idled since March 2020 with no imminent date for restart. News reports in January 2021 indicate that the provincial government will provide financial assistance (Canadian dollars [CAD] 16.6 million) to maintain the refinery warm in case of a future restart as it seeks new owners.

An ‘upgrader’ is a facility that processes heavy crude or bitumen into a lighter, lower- sulphur-content synthetic crude that is easier to transport. About 35% of bitumen produced from Canadian oil sands is upgraded into synthetic crude oil before being sold to market. Upgraders can also produce some refined products such as diesel fuel oil. When upgraders are co-located at bitumen mines, most of the diesel is consumed on site to power heavy equipment and mine vehicles.

There are currently five operational bitumen upgraders in Alberta with a total combined capacity of 1.36 mb/d: three located north of Fort McMurray (Suncor, Syncrude and Canadian Natural Resources Ltd [CNRL] Horizon), one located northeast of Edmonton (Shell Scotford), and one located on the Alberta-Saskatchewan border (Husky’s Lloydminster). Except for the Shell and Husky upgraders, the other upgraders are located adjacent to mining operations and are integrated with bitumen production.

The majority of Canada’s crude oil stocks are held in Western Canada across five major hubs, including Edmonton, Fort Saskatchewan and Hardisty in Alberta, and Kerrobert in Saskatchewan. These hubs are connected with major intraprovincial and cross-border pipeline networks, allowing crude to flow to the Midwest US and Eastern Canada. Total crude storage capacity in these hubs is estimated at 118 mb. 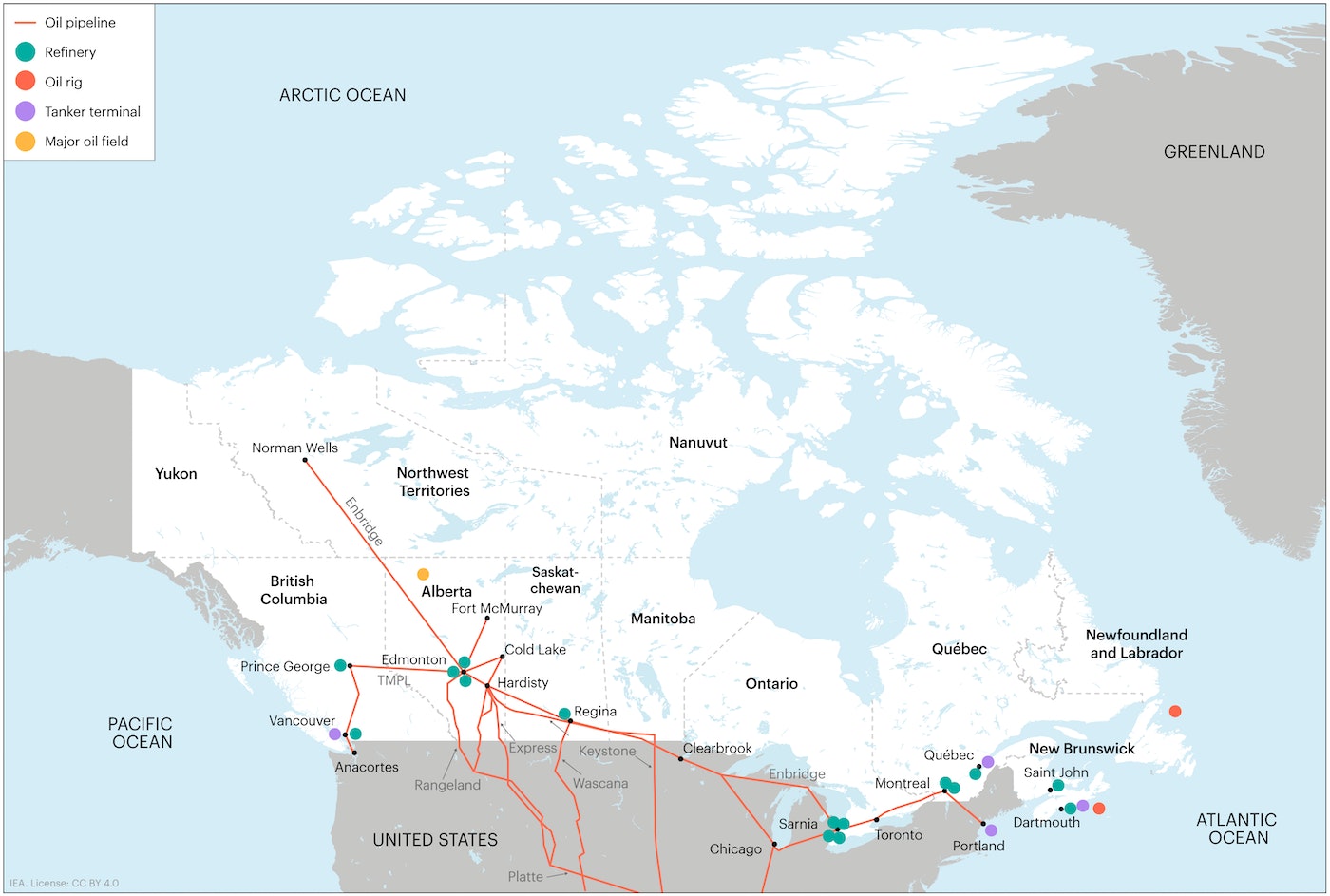 As a major oil producer and significant net exporter, the Canadian federal government’s oil emergency response policy is primarily based on the market’s ongoing ability to meet demand. In general terms, this translates to relying on the energy market to continuously enhance the size, flexibility and diversity of its supplies to reduce the risks, and potential impacts, of oil supply disruptions. While the government has the authority to take direct action in the event of market failure, it primarily relies on market instruments to achieve energy objectives.

In circumstances where the market cannot adequately respond to a supply disruption and government intervention is required, Canada’s emergency legislative and regulatory framework grants the government powers to respond to a fuel supply disruption. Prior to its activation, however, the federal government would seek to work with municipal and provincial governments to solve disruptions in a cooperative manner with industry. Failing this, and typically once provinces have declared their own response efforts exhausted, an energy supply emergency would be declared.

The Energy Supplies Emergency Act (ESEA) and the Emergencies Act provide the legislative basis for Canada to take broad reaching measures in a nationally declared emergency. The ESEA, which was passed in order to allow Canada to fulfil its IEA treaty obligations, establishes the Energy Supplies Allocation Board (ESAB). When activated, ESAB would have broad-ranging authority to direct the flow of petroleum-based energy resources in an emergency. While not specific to the oil sector, the Emergencies Act further provides the Government of Canada broad powers to respond to emergencies in specific circumstances (i.e. emergencies related to public welfare, public order, international crisis, and war).

In non-emergency times, the Strategic Petroleum Policy and Investment Office within Natural Resources Canada (NRCan) serves as the core National Emergency Strategy Organisation (NESO) staff. When emergency enabling legislation is activated (i.e., Energy Supplies Emergency Act), a much larger emergency organisation can be mobilised under the ESAB. This group comprises a chairperson and not more than six other members. The ESAB’s board is chaired by the Deputy Minister of NRCan with other members appointed by the Governor in Council, and it reports to the Minister of NRCan. The board is supported by core-NESO staff who consult with industry and provincial counterparts on a regular basis.

The ESAB remains a dormant body having never been invoked since coming into effect in 1985. Past crisis responses, including measures activated during the 2016 Alberta wildfires and the 2005 IEA collective action, did not meet the threshold for activating ESEA powers. The government of Canada regularly reviews its emergency oil policies and legislation in order to assess effectiveness, also in light of Canada’s transformation over the period into one of the world’s leading oil exporters.

As a net oil exporter, Canada is not subject to the IEA’s emergency stockholding obligation (90 days of net import cover) and Canada does not have any publicly held emergency oil stocks, nor does it set compulsory stockholding obligations on industry. All oil stocks in Canada are industry stocks held for commercial/operational purposes. Based on the average daily demand of the forward three months, recent stock levels have averaged between 75 and 85 days.

Voluntary demand restraint measures are Canada’s stated preferred contribution in the event of an IEA Collective Action. The government of Canada, through a robust federal/provincial/territorial emergency management system, underpinned by the Federal Emergency Response Protocol, has various overlapping systems for coordinating government responses in an emergency.

In implementing demand restraint measures, the federal government would lead on actions taken at the national level, such as public communications programmes and telecommuting measures targeting federally-regulated employees, and would coordinate with provincial governments to encourage the roll out of demand restraint measures vis-à-vis the powers available to the provinces and territories (provincially-regulated employees, road and traffic regulations, transit programmes, etc.). If such efforts are found to be insufficient to reduce demand enough to meet Canada’s international obligations, the Government of Canada could implement more specific and/or compulsory demand restraint measures under a declared national emergency.

Based on data provided in the IEA’s publication Saving Oil in a Hurry, the Canadian Administration has commissioned a study to model the volumetric savings from potential demand restraint measures. This includes several light-handed mechanisms for daily road transportation, such as eco-driving measures, car-pooling, telecommuting, and increased use of public transport systems that could each save an estimated 0.1%-1.5%, depending on the intensity and variety of the methods used. More severe measures, only applicable under a declared national emergency, such as odd/even driving bans, are estimated to be able to save around 20-30% in road fuel usage (approximately 220 kb/d to 330 kb/d, equivalent to 9-14% of Canada’s total oil demand).

Under Canada’s federal system, the provinces have jurisdiction over oil resource rights and are responsible for regulating oil production. In the event of a major oil disruption that would prompt IEA collective action, the federal government would communicate with the provinces to encourage them to lift rate limitations on wells. Only Alberta would have some capacity to surge production in the short-term (i.e. 1‑3 months) and most of this would be through market-based supply response, but would not result in any significant impact for the purpose of an IEA collective action. According to the Alberta Energy Regulator, the technical challenges involved with achieving nameplate capacity at oil sands facilities, would minimise the effects of a temporary suspension of the maximum rate limitation under an IEA collective action.