Coal and nuclear dominate the Czech Republic’s power generation but with the planned phase-out of coal (recommended by 2038 by the EU Commission in 2020), significant challenges are expected for system adequacy. The State Energy Policy (SEP) of 2015 has set target corridors for each generation source for 2040. According to the SEP the share of coal in gross electricity generation will more than halve, to between 11-21% in 2040. Nuclear will largely replace coal and the share of nuclear electricity generation would reach between 46-58% in 2040. For this, the government plans to add 1 200 MW nuclear capacity by 2036. The government should update its methodologies and models to ensure robust technical analysis for future system security.

ČEPS is the transmission system operator (TSO) for electricity supply in the Czech Republic, and the distribution network is mostly operated by three privately owned operators. In the case of major disruptions, the TSO control centre can declare a state of emergency in the electricity system. Depending on the severity of the disruption, the TSO may implement the Consumption Restriction Schedule to restrict electricity supply to certain categories of customers.

In 2019, the government updated the National Action Plan for Smart Grids to create conditions for higher penetration of decentralised sources of electricity and to increase the security of electricity supply. However, important measures such as shortening the trading period for the imbalance settlement from 1 hour to 15 minutes will not be implemented before 2025.

ČEPS operates the Czech transmission system, holding the exclusive TSO license granted by the Energy Regulatory Office (ERO). Its sole shareholder is the Czech government, which delegates the authority to exercise its shareholder rights to the Ministry of Industry and Trade (MIT). ČEPS’s core mission is to provide electricity transmission in the required volumes with high reliability, and to balance the supply of electricity with demand on a real-time basis. It has responsibility for maintenance and upgrading of transmission infrastructures, and cooperates with other European TSOs.

The TSO prepares and implements systemic measures to strengthen the transmission capability of existing lines and to build new lines, and has prepared the Ten-Year Transmission System Development Plan of the Czech Republic 2019-2028 in accordance with the Energy Act. According to the Plan, a predetermined number of transformers which are at the end of their lifetime should be replaced annually with new ones with higher output, and ČEPS is currently planning to phase out the old 220 kV network and replace it with a 400 kV system.

The Czech electricity distribution network consists of 91 448 km of very-high-voltage lines and 151 737 km of low-voltage lines, serving the residential, commercial, and small and medium-sized industrial sectors.

There were 258 DSOs in the Czech Republic at the end of 2019. However, the distribution network is mostly operated by three privately owned regional DSOs (ČEZ Distribuce, E-ON Distribuce and PREdistribuce). The remaining 255 DSOs are local, and may or may not be connected to the regional DSOs. The geographical area of each regional DSO is clearly defined: ČEZ Distribuce serves mostly the northern part of the country, accounting for 65% of domestic electricity consumption; E-ON Distribuce serves mostly in the southern part, accounting for 24%; PREdistribuce exclusively serves the cities of Prague and Roztoky, accounting for 11%. All companies are exclusive licence holders for distribution services in their respective operating area.

The level of the Czech transmission system interconnectivity is regularly monitored and evaluated by ČEPS, both at the national and European levels. The European Union has set a target for 2030 for member countries to have 15% interconnection capacity compared to the installed generation capacity, which the Czech Republic has already achieved. The Czech Republic aims to maintain import and export capacity relative to the maximum load of at least 30% and 35% respectively. 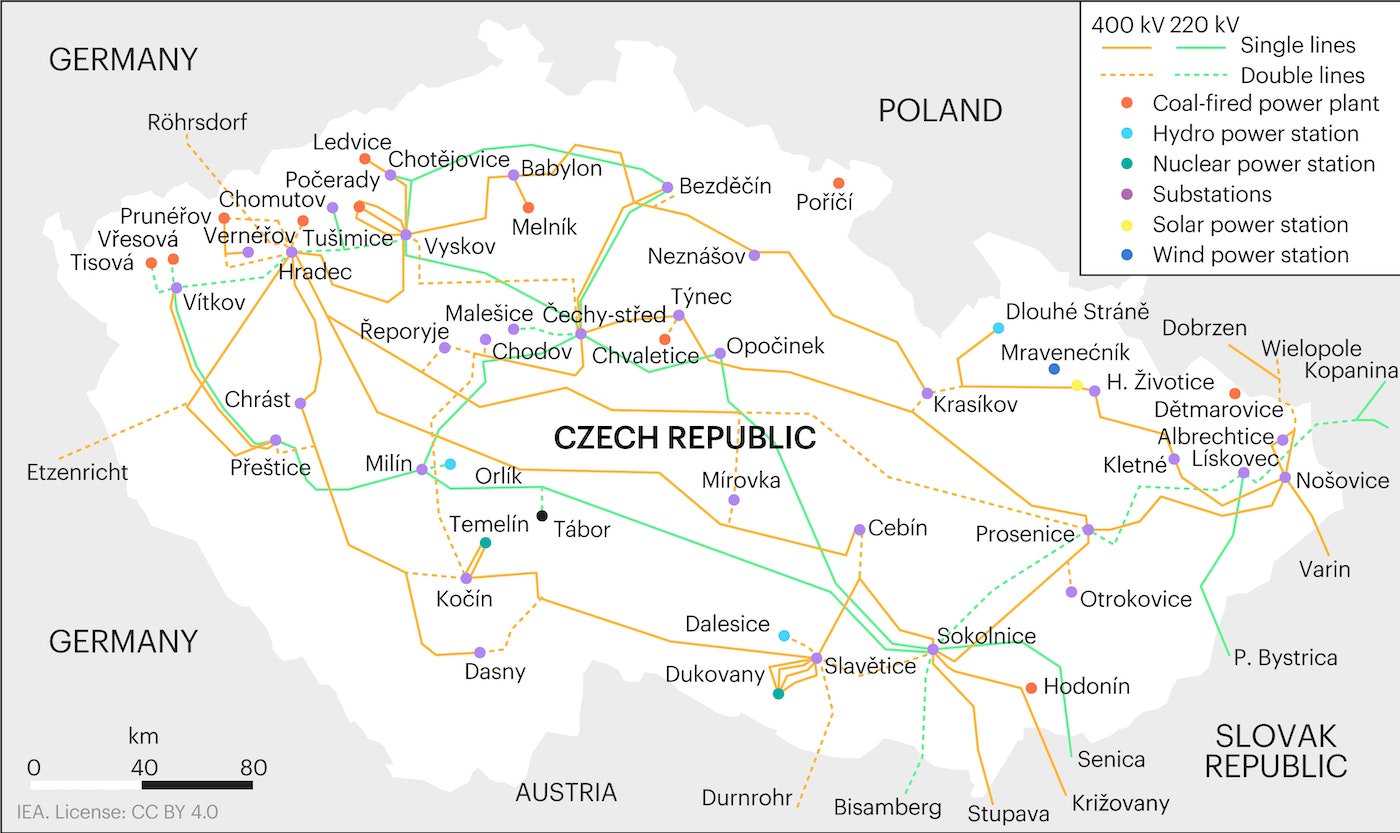 The Czech Republic has a comprehensive electricity security framework in place to manage system disruptions. The MIT has elaborated standard plans for resolving electricity crises and, in 2018, prepared the Type Plan for the Disruption of Large-Scale Electricity Supplies in cooperation with other governmental authorities, ČEPS and ČEZ.

In compliance with the Energy Act and Decree No. 80/2010, the TSO control centre is entitled to take steps to avoid a state of emergency and, in the worst-case scenario, declare a state of emergency in the Czech electricity system. Extraordinary tools are available for the TSO to address emergency situations such as the Frequency Maintenance Schedule, the Switching-off Schedule and the Consumption Regulation Schedule, with their use depending on type, duration and severity of the disruption. According to Decree No. 80/2010, other parties responsible for system security besides the TSO are generators, DSOs, and technical dispatching centres. Customers and electricity traders are also legally required to follow instructions given by the above mentioned entities.

As Decree No. 80/2010 specifies, depending on the severity of an electricity emergency, the TSO may implement the Consumption Restriction Schedule which allows electricity consumption to be restricted for seven categories of customers; these categories correspond to the seven regulation stages set by the TSO. Although electricity supply is not interrupted in such situations, consumers falling into certain specified categories are obliged to reduce their consumption. Regulation stages are announced by telephone to the relevant DSO control centres, through the media, and/or via the ČEPS Crisis webpage to the general public.

During consumption restrictions, the TSO continuously evaluates the situation, using available resources to restore voltage and manage the gradual resumption of normal operations. An instruction concerning consumption restriction within a distribution system is issued by the dispatcher of the relevant DSO control centre. Once a crisis situation has been brought under control and a restriction is no longer necessary, the dispatcher sends a further instruction terminating the restriction.

Electricity emergency response policies in the Czech Republic are stipulated in the Energy Act, which defines the term “emergency prevention” as a set of measures and activities carried out in a situation where there is a real risk of an emergency. In accordance with the Energy Act, the government needs to prepare emergency plans, which represent a set of planned measures for the prevention of emergencies and for the effective and rapid elimination of these situations once they occur.

Provisions enabling emergency response in the electricity sector are laid down in Decree No. 80/2010. This Decree describes key principles regarding management of changes in the supply of electricity and the reduction of electricity consumption, via classification of customers and action plans of the TSO, DSOs and other relevant stakeholders in circumstances where there is a real risk of an emergency and under a state of emergency.

TSO ČEPS plays a key role in responding to electricity supply disruptions; it is responsible for the dispatch control of the Czech electricity system, which involves the real-time balancing of supply and demand within the system. Real-time operation of the transmission system is controlled and managed from the ČEPS control centre which is equipped with automated control systems and situated in Prague, with a backup control centre located in Ostrava. In order to maintain reliable transmission system operation and the provision of system services, the ČEPS control centre monitors, on a real-time basis, the expected load on the power system and scheduled cross-border exchanges. The TSO is also required to prepare and regularly update its emergency plans to avoid and manage abnormal situations in the transmission system. A defence plan (addressing occurrence and spread of an electricity disruption) and a restoration plan (for the restoration of electricity supplies after a system blackout) form important parts of the TSO’s emergency plan.

The Ministry of Industry and Trade has jurisdiction to oversee system security. It is required to take measures to maintain the integrity of electricity systems with a view to the speedy restoration of all critical infrastructure functions, and entrust relevant stakeholders, notably the TSO, with the tasks of protecting and urgently rehabilitating electricity infrastructure. The MIT also has responsibilities for the planning of electricity generation and use in a crisis situation, in close cooperation with the TSO, DSOs, electricity producers as well as other government authorities, and ensuring the efficient exchange of information.

Assessments on the Czech Republic’s generation adequacy have led to the expectations that it would become more dependent on electricity imports in 2030, with potential concerns for the security of supply, founded on the absence of large capacity addition under preparation that could become operational before 2030. Any new capacity built in addition by 2030 would most likely only come from decentralised facilities, or renewable sources that would be connected to the transmission system. Coal-fired generation will continuously decline due to increasing Emissions Trading System prices and the new emission limits for combustion power plants under EU regulations that have become effective as of 2021.

In compliance with EU requirements, the Czech Republic has prepared a “Strategy on Adaptation to Climate Change” in 2015 and a ‘National Action Plan for Adaptation to Climate Change’ in 2017, updated in 2021 and with a marked statement on the increased risks climate change would pose to power supply and energy infrastructure, due to extreme weather events. The adaptation action plan further recommends the development of smart grids, decentralised energy sources and the diversification of energy sources as key adaptation measures.

Act No. 181/2014 regulates cybersecurity in the energy sector and sub-sectors, with the main objective to increase cybersecurity in crucial parts of the energy sector, notably power-generating facilities. The National Cyber and Information Security Agency (NCISA) was nominated as director and coordinator. Decree No. 82/2018 on cybersecurity establishes the specific obligations that the entities in the electricity sector must comply with. Despite these legal and institutional developments, improvements of operational measures to respond to actual cyberattacks seem to be relatively slow. While the identification of critical infrastructures vulnerable to potential cyber threats is required to be carried out by NCISA, there are hardly any exercises targeting specifically the electricity sector.