Natural gas is the fourth-largest energy source in the Czech Republic. Industry is the largest user, followed by residential and electricity and heat generation. With hardly any domestic gas production, the Czech Republic relies on imports for its domestic consumption, mostly from Russia.

As a landlocked country, the Czech Republic does not have any LNG terminals and natural gas is imported via pipeline interconnection points between the Czech Republic and neighbouring countries, namely Germany and Slovakia. The Czech gas transmission system plays a key role in supplying gas to Central and Eastern Europe as well as to Germany and Western Europe, with the annual amount of gas transported through the country more than four times domestic consumption. Given the country’s role in the European gas supply network, the government should increase regional cooperation and assistance in case of security of supply problems, and organise cross-border emergency response exercises.

Czech gas suppliers are required to maintain gas reserves. Mobilisation of these security reserves can only be decided by the Central Crisis Management Committee after declaration of a state of emergency. As a last resort measure, a solidarity mechanism mandated by EU Regulation can also be applied to supply gas to protected customers, although bilateral agreements with neighbouring countries must be concluded to validate the mechanism.

Note: Transport data is not visible on this scale.

The Czech natural gas transmission network is composed of 2 637 km of transit pipelines, 1 181 km of domestic pipelines, and is divided into four branches: the Northern and Southern branches, which run from Lanžhot to the Czech-German borders, the Western branch, which connects the Northern and Southern branches, and the Moravian branch which supplies the Moravian region (south-eastern part of the country) and connects with Poland. These branches are well interconnected, except for North Moravia which is connected to the national transmission system by a single pipeline.

In accordance with the Energy Act, NET4GAS, the Czech transmission system operator (TSO), each year prepares a Ten-Year Plan that analyses maximum daily and annual consumption and the adequacy of input and output capacity for the Czech Republic to guide the planned development of gas infrastructure.

The Czech gas transmission system plays a central role in supplying gas to Central and Eastern Europe as well as to Germany and Western Europe. On a yearly basis, around 35 to 40 bcm of natural gas is transported through this system, more than 4 times the annual gas consumption of the Czech Republic, but there has been a major change over the past 10 years. In 2010, more than 80% of the transit gas flows through the Czech Republic went from east to west (mainly from Slovakia to Germany). Today, almost all the transit flows run from west to east (from Germany to Slovakia). In addition, gas also flows from north to south (from eastern Germany to southern Germany) through the Gazelle pipeline.

The Capacity4Gas (C4G) project, a follow-up infrastructure to Nord Stream II and the subsequent European Gas Pipeline Link (EUGAL), was completed in December 2020 and it increases the transmission capacity by about 35 bcm/year to supply gas to the Czech Republic and to Slovakia and beyond.

The Czech Republic has eight underground natural gas storage facilities, most near the Czech-Slovak border, with a combined maximum storage capacity of 3.3 bcm (about 38% of the annual consumption covering 140 days of domestic demand in 2019) with maximum withdrawal and injection capacities of 75.5 mcm/d and 53.6 mcm/d respectively. The facilities are operated by three storage system operators: RWE Gas Storage (operating six storage facilities), MND Gas Storage and Moravia Gas Storage (operating one storage facility each). Access to the storages is regulated through negotiated third party access. Notably, Dambořice storage managed by Moravia Gas Storage is presently undergoing an expansion from 208 mcm in 2019, 370 mcm in 2020 to 448 mcm in 2021. In addition, the company SPP Storage operates another facility in Southern Moravia with storage capacity of 0.6 bcm, which is currently used exclusively for supplying the Slovak Republic, but is planned to connect to the Czech gas network in 2022. 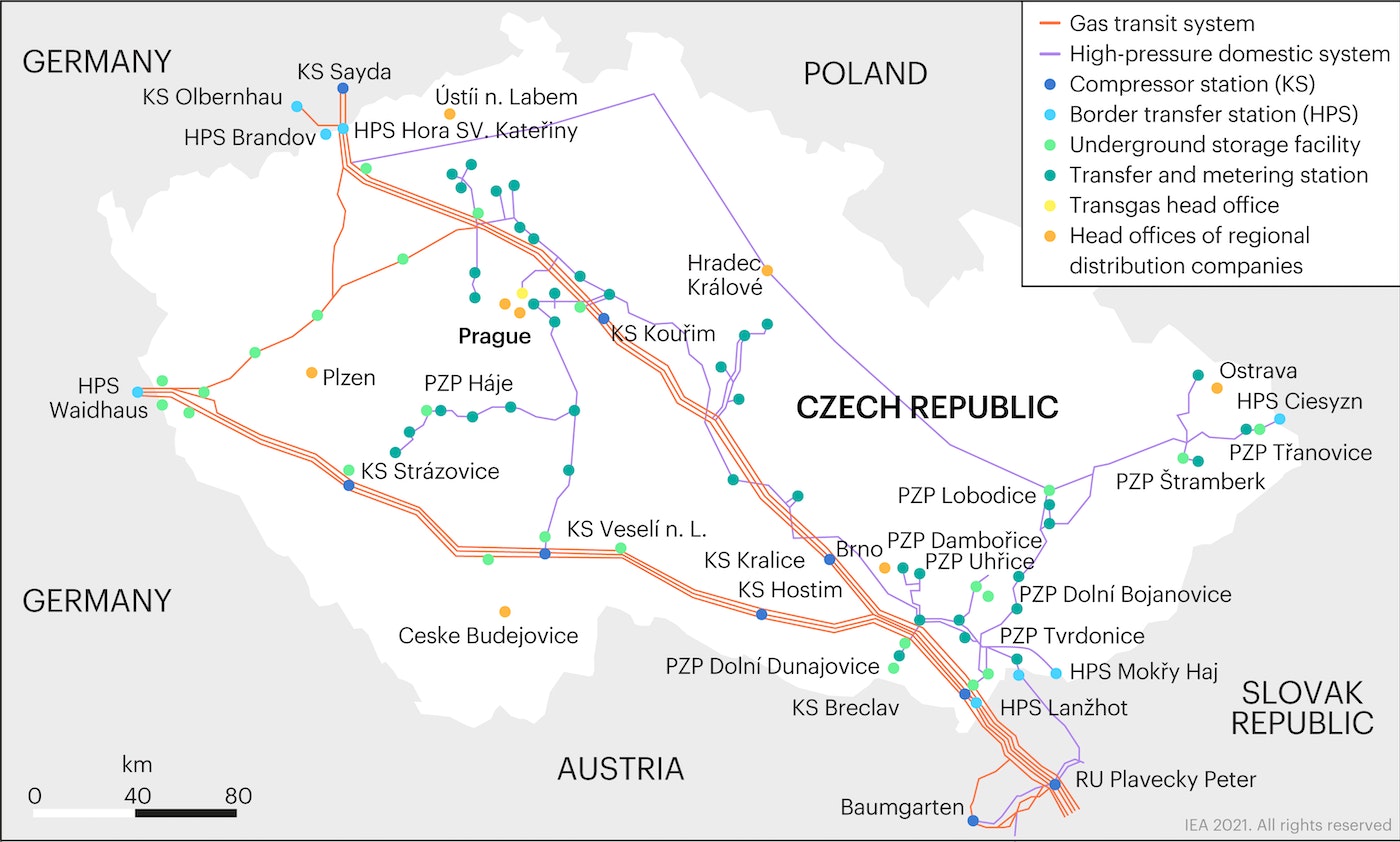 The Czech Republic maintains a high degree of natural gas supply security through a combination of several measures, including a relatively high capacity of underground commercial gas storage and well-established safety standards of TSO and DSO infrastructure. The country seeks to improve security of supply through capacity extensions of a number of storage facilities and increased flexibility and interconnections of its gas network.

The Ministry of Industry and Trade monitors compliance with safety and reliability standards for the gas and electricity networks, and implements protective measures for emergencies. The TSO has a number of obligations, including securing the safe and reliable operation and maintenance of the transmission system, improving the transmission system and interconnection with neighbouring states, as well as solving problems during a gas emergency. In the event of an accident, the dispatching centres of the TSO, DSOs and storage facility operators are capable of cooperating to operate the network safely together.

The Czech gas National Emergency Strategy Organisation (NESO) nominally comprises 22 people from a number of organisations including the TSO, DSOs, and relevant gas stakeholders. Notably, the leading role of the NESO is performed by the central dispatching unit of the TSO, NET4GAS. The TSO carries out the practical management and coordination of any gas crisis situation and is responsible for setting the emergency measures to be implemented by the relevant entities in the system. It also has a role of collecting and processing the required information in order to perform those functions.

In accordance with EU regulation 2017/1938, the competent authorities of neighbouring countries are expected to exchange proposals for their Emergency Plans and carry out consultations at regional level in order to avoid inconsistencies between emergency measures proposed by each country and facilitate harmonisation between them. The Czech Republic has concluded such an arrangement only with Slovakia.

The Czech Preventive Action Plan includes the measures needed to solve or mitigate security and supply risks identified in the national and common risk assessments. The Emergency Plan describes three crisis levels: early warning, alert and emergency. During the first two levels, the available natural gas emergency response measures are market-based, but if the situation is determined to require declaring a state of emergency, non-market measures are also applied. The TSO has a duty to manage emergency prevention and emergency activities for the country, including publishing information in the mass media, allocating gas, and notifying the MIT, the ERO, the market operator and relevant municipal authorities. It is supported by DSOs at regional level.

In the event of a state of emergency, all participants in the gas market are obliged to comply with restrictions on gas consumption or supply. For emergency response purposes, natural gas customers are divided into eight categories (A, B1, B2, C1, C2, D, E and F) based on their annual gas consumption and whether they provide essential services. Restrictions are decided based on these categories and on the level of actual gas disruption. The TSO or the appropriate DSO announces the emergency level through Czech Radio and informs all participants on the gas market including state authorities.

In light of this increased interlinkage between the gas and electricity sectors, more attention should be given to cross-sector emergency plans and exercises to mitigate the potential impact of a gas supply disruption on electricity production, and vice versa.

There are no government-owned strategic natural gas reserves in the Czech Republic. Suppliers that serve protected customers are obliged to have gas emergency stocks held in the country or elsewhere in Europe, with preference for domestic storage facilities.

Czech natural gas traders supplying protected customers are required to maintain gas reserves, corresponding to 30 days of exceptionally high gas demand of those customers based on EU Regulation 2017/1938. These stocks should be available between 30th of September and 1st of April to ensure that high gas demand is met during winter. The average level of these mandatory gas reserves in the winter season 2019/2020 was 325 mcm, sufficient to cover about 11 days of gas supply in winter and equivalent to a volume of 14 days of average gas demand in 2019. Both the storage system operators and the suppliers to protected customers have to report stock levels to the market operator and the ERO on a monthly basis between September and March. In case gas is stored outside of the Czech Republic, the suppliers also have to report on the transport capacity booked in order to bring the gas into the country.

Mobilisation of gas security stocks is one of the key non-market-based emergency response measures. But before these stocks can be released, market-based measures, such as increased imports and the use of bi-directional cross-border interconnection points, should be used and exhausted. The Central Crisis Management Committee decides on the release of compulsory gas stocks. Over the last decade, there have been no supply disruptions seriously affecting the national gas system or requiring release of emergency stocks. The large storage capacity and the diversification of supply sources supported by several pipeline interconnections with neighbouring countries, as well as the obligated gas storage for protected customers, allows for a resilient level of security in the Czech gas system.