France’s electricity market has the highest share of nuclear generation (67% in 2020) amongst the IEA countries, which combined with large hydropower and renewables outputs, results in 80% of the country’s electricity production being carbon-free. However, planned decommissioning of ageing nuclear plants and government targets to reduce the share of nuclear generation to 50% before 2035, and the need to replace these capacities with variable renewables, poses a challenge to the country’s electricity supply security. Additional efforts are especially needed by 2025 to assure system adequacy, following the 2020 closing of the Fessenheim nuclear plant and reduction of coal generation.

France has a legal requirement to limit electricity supply losses in line with a 3-hour loss of load expectation (LOLE) standard, which is part of the Energy code. In the models produced by the transmission system operator, RTE, a disruption expectation of three hours per year represents a consumer cut-off expectation of less than two hours. This loss-of-load expectation is comparable to other European countries.

France’s transmissions system operator RTE operates a very large network of 106 000 km of power lines (at medium to high voltage levels above 63kV, while most European TSOs only own/operate above 220 kV). RTE is integrated within Électricité de France (EDF) and since 2017, 49.9% of the shares of RTE are held by Caisse des Dépôts et Consignations (CDC) and CNP Assurances.

RTE's 2019 ten-year network development plan identifies the need for network investments in replacements and a 30% increase in grid expansions by 2030. The grid needs to be adapted to accommodate new flows (like offshore wind) by increasing the capacity of existing lines, by building new ones, and by dismantling lines that would be less useful. RTE also needs to adapt the grid’s digital framework, while raising cyber-security standards.

In France, 97% of the distribution companies serve networks with less than 100 000 clients. Only four ELDs (Strasbourg, Metz, Vienne, Deux-Sèvres) serve more than 100 000 customers and adopted functional and legal separation. Investments in (transmission and) distribution networks are financed by the tariff for the use of public power grids (tarif d’utilisation des réseaux publics d’électricité, TURPE), which is regulated by the Energy Regulatory Commission (CRE) in four-year periods. France equalises or cross-subsidises the transmission and distribution grid tariffs across its territory (urban areas subsidise rural ones). Investment decisions however, vary from ELD to ELD and depend on the historic structures, not the concession. For instance, for the development of renewable energy sources, the cost of developing the grids are shared by RTE and the renewable project developers at the regional level (S3REnR scheme). For offshore wind, RTE ensures and invests in the necessary grid connections.

France has improved its interconnection capacity with the United Kingdom (‘UK’, hereafter) thanks to the commissioning of Interconnection France-Angleterre 2 in January 2021. Plans are in progress on the Celtic interconnection linking France and Ireland and works under way for the ElecLink to the UK (through the Channel Tunnel). A new interconnection to Italy has also started. The integration with the Iberian Peninsula was strengthened with the commercial opening of a new interconnection in 2015, which will further increase in 2027 with the planned high voltage direct current (HVDC) cable France-Spain (Gulf of Biscay). France is the main bridge for Spain and Portugal to access the European electricity market and progress is expected under the Lisbon Declaration of Spain, Portugal, and France.

RTE's network development plan foresees investments in new interconnections, thus doubling France’s interconnection capacity by 2035. By 2030, France aims at doubling its import capacity (26 GW or 16.5% of interconnectivity), to above the 15% EU 2030 target.

Under the EU Clean Energy Package, at least 70% of interconnection capacity must be made available to the market for cross-zonal trade by 2025 at the latest, unless the country asks for a derogation justified by operational security constraints and puts in place an action plan to alleviate those. In the case of France, DC borders (with Great Britain) comply with the target but there is little data available on how this target will be implemented; and a derogation is in place and will probably be applied until the Swiss transmission system is integrated in the coordinated capacity calculations of France’s adjacent regions.

For the development and connection of renewable energy sources, France has developed a special legal framework (S3REnR scheme) in order to share costs, at the regional level and between the renewable projects. RTE is in charge of elaborating and implementing the schemes, which must remain flexible. The intention is to give visibility to the producers and to share the costs equitably between them. The State representative (Préfet) formally approves the cost per MW in each region, while for the development of offshore wind, RTE ensures the necessary grid expansions.

The IEA and RTE together identified the conditions and requirements for a power system based on very high shares of renewables. The report was published on 27 January 2021 and outlined four groups of strict conditions that need to be met in a large and meshed power system such as that of France:

Today, storage facilities cannot participate in balancing reserves (mFRR/RR) due to IT constraints in RTE’s system. At present, RTE is experimenting with an intelligent battery-based electricity storage network, named RINGO, at three different sites, to manage peaks in renewable energy production. Located in Fontenelle (Côte-d'Or), Ventavon (Hautes-Alpes) and Bellac (Limousin), these three sites of a total capacity of 97 MWh will all be connected to each other, with automated management, and will be remotely controlled in real time. RTE and Enedis have also launched calls for tenders enabling storage (and flexibility providers) to offer local flexibility services, notably under the capacity market. France is working on reducing the barriers to the rollout of storage including the introduction of a legal framework, the simplification of the network connection rules, and the clarification of tax rules, with ambition to have a significant grid stabilising role of battery-storage in a horizon by 2030.

To ensure adequate integration of renewable energies to its electricity grid, France will also need to increase and diversify its energy storage, including hydrogen electrolysers, battery storage, or traditional pumped hydro, which would require the completion of the regulatory framework for storage in France. 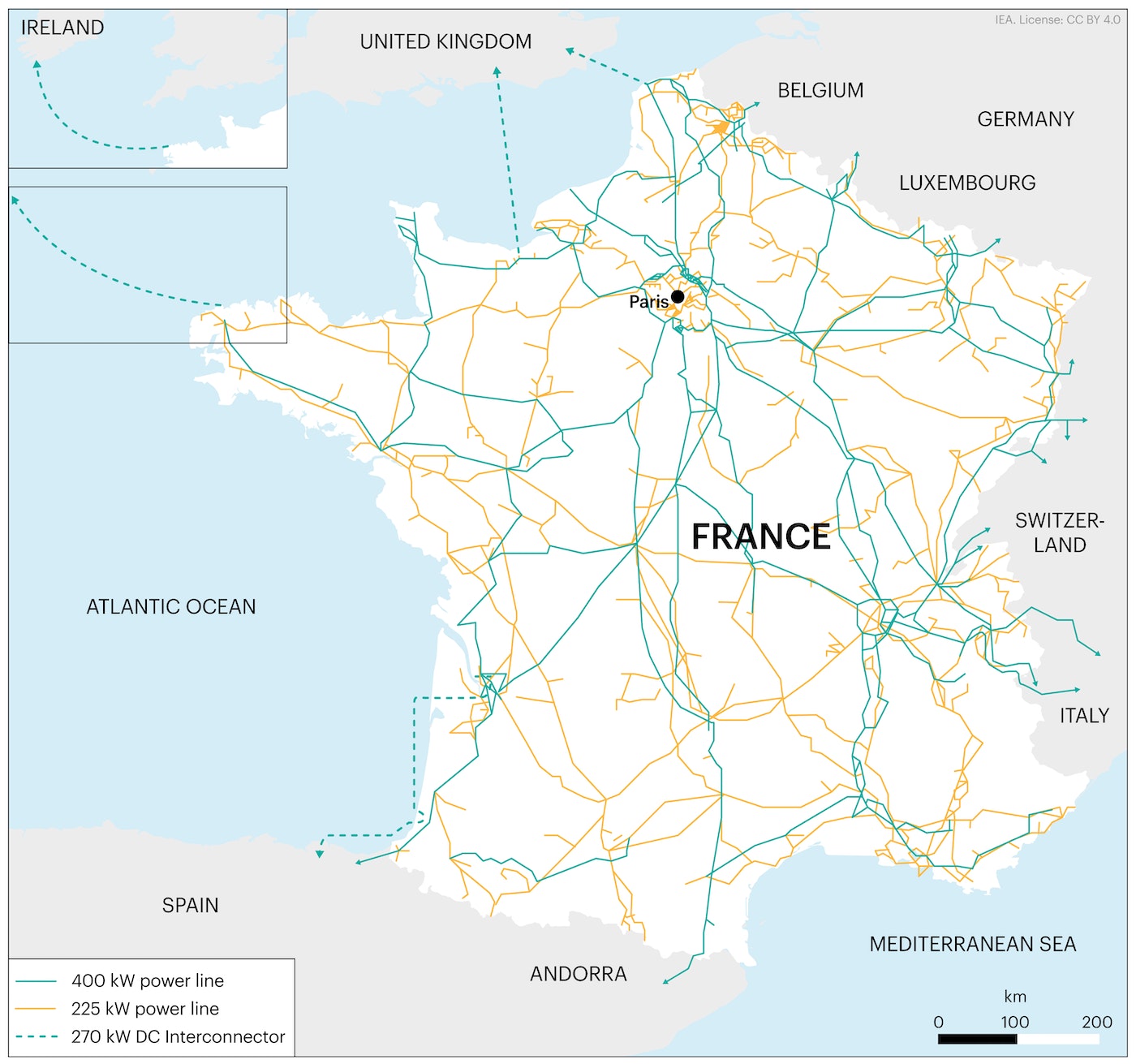 The risk assessment for electricity supply is set out in several documents. These include the ‘National Plan of Electricity Continuity and the Organisation of Civil Security Response’, which sets out the emergency response in a crisis; and the French Energy code, which details the obligations for a network operator, as well as other documents which refer to different levels of application i.e. European, national, zonal, departmental and for specific sites. Combining these documents under the Risk Preparedness Plan published in 2022, has presented a clear and unified description of the risks, mitigations, and response measures which would aid emergency response planning.

The main legislative framework for electricity security is based on the French Energy Code and the provisions of EU Regulation 2019/941. RTE, the transmission system operator, is responsible for assuring real-time power system adequacy as well as security, safety and efficiency of the power network.

RTE publishes every year a safety assessment of the power system which gives an overview of the security levels. RTE also publishes an annual adequacy assessment (bilan prévisionnel), that contains an in-depth study of the supply-demand balance for the coming ten years and quantifies the average disruption duration, analyses risk scenarios and evaluates the electricity generation or demand response capacities needed to ensure security of electricity supply.

At European level, RTE works with the regional coordination centres (CORESO, TSC). RTE is the largest TSO in Continental Europe, so it has a large role in the European system security. This was highlighted 8 January 2021, when the Continental Europe Synchronous Area was separated into two areas (the North-West area and the South-East area) due to cascading trips of several transmission network elements. RTE and Terna (Italy) automatically disconnected 1.7 GW of industrial consumers (out of a total system load of about 200 GW in the North-West area) to prevent any further frequency drop and avoid activating load shedding.

In its five-year supply/demand outlook of 2021, RTE indicates a very tight adequacy situation in the coming decade, distinguishing three main periods until 2030:

Up to 2024, several levers may be activated to improve the adequacy situation: controlling consumption, optimising the schedule for nuclear reactor shutdowns and maintaining availability, as well as using the Cordemais coal-fired power plant for residual operation a few hours a year if necessary before Flamanville EPR and offshore wind park Saint-Nazaire come into service.

France has several mechanisms to manage security of electricity supply. A capacity mechanism commits capacity providers to make their generation or demand reduction available during consumption peaks; it includes 2.9 GW of demand side response. An additional 600 MW of demand side response has been brought forward by the Interruptibility Scheme, which enhances existing interruptible industry demand of 1.3 GW, contracted by the TSO. Beyond this, RTE has several additional response measures available to maintain system balance, such as calls for citizens to voluntarily reduce electricity consumption, purchases from other European transmission operators within the framework of emergency contracts, activation of interruptible capacities in large-scale industry, reduction of voltage on the distribution networks, and ultimately targeted load shedding.

Detailed actions and measures for climate resilience in the energy sector were proposed in the first National Climate Adaptation Plan (PNACC), while the second PNACC (2018-2022) pays less attention to this topic. The Multiannual Energy Plan (Plan Pluriannuel de l’Énergie PPE) also includes investments in the security of supply, notably in the weatherisation of energy infrastructure to address climate change impacts and extreme weather events.

In 2008, EDF initiated a plan to deal with heatwaves, the so-called 'Grands Chauds' plan, which aims to ensure the safety and supply security of EDF's nuclear power plants in the face of increasing temperatures. The “Grands Chauds” plan includes a re-assessment of maximum water temperatures expected at each nuclear power plant up to 2030. Revised temperature estimates have informed the revision of engineering guidelines for extreme weather situations and of safety standards taking into account climate change impacts. EDF has also undertaken a systematic climate change risk assessment for its infrastructure and activities, and developed technology to reduce flood risks following heavy precipitation events. This system, called piano key weir (PKW), improves flood discharge from hydropower dams during heavy precipitation events.