The use of publicly held stocks by the dedicated national stockholding agency is the central element of Hungary’s emergency response strategy. These emergency stocks can be released by ministerial decree in the event of a supply emergency and can, if necessary, be complemented by demand restraint measures.

Hungary produces a small amount of crude oil, but is heavily reliant on crude imports. Hungary remains reliant on Russian crude, though the extent of this reliance has progressively decreased in recent years.

Hungary is also a net importer of oil products, and is expected to remain so in the medium term with demand growth likely to outpace local production until at least 2025. Oil product consumption is heavily concentrated in the transportation and industry sectors with only negligible use for electricity generation.

A number of oil product pipelines link the Duna refinery with demand centres, as well as with the Tiszaújvaros and Zalaegerszeg refineries. Hungary is also linked to the eastern oil product pipeline that transports oil products from Russia’s refining centres via Ukraine; this system has been primarily used by MOL Group as a means of purchasing Russian gasoil feedstocks for further processing. In addition to the pipeline connections, products can be exported, imported and transported internally via barges on the Danube from Komárom and Százhalombatta.

There is one major refinery in Hungary, the 162 kb/d Duna site in Százhalombatta, operated by MOL. MOL operates the Duna refinery in coordination with another of its refineries, the 122 kb/d Bratislava refinery (in the neighbouring Slovak Republic), with a significant amount of intermediate products being exchanged between the two plants. There are also two smaller refineries in Tiszaújvaros (60 kb/d) and Zalaegerszeg (10 kb/d) which do not currently process crude; the Tiszaújvaros site is used for desulfurization and gasoline blending, while the Zalaegerszeg site focuses on the production of bitumen. Tiszaújvaros and Zalaegerszeg are both also owned by MOL.

Total storage capacity for crude and oil products combined stands at 32.5 mb (13 mb of which as crude oil). There are three main storage operators in the country: MOL, Hexum Tank Storage (formerly OPAL) and Product Storage. 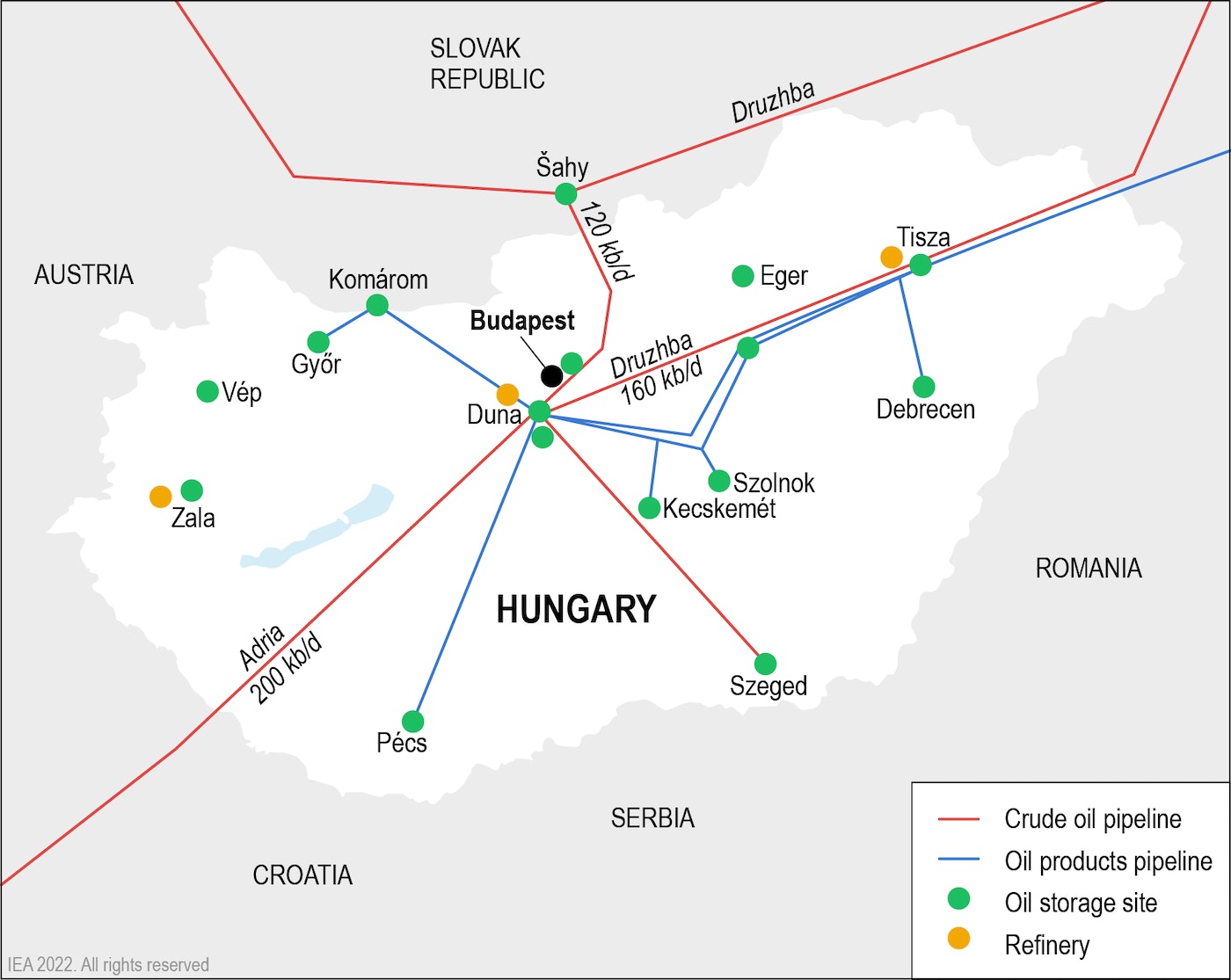 “This map is without prejudice to the status of or sovereignty over any territory, to the delimitation of international frontiers and boundaries, and to the name of any territory, city or area.”

Hungary’s emergency response policies are contained in Act No. XXIII of 2013 on Security Stockpiles of Imported Crude Oil and Petroleum Products. Further details of the government’s strategy in the event of a supply disruption strategy can be found in a government handbook, the Manual on the Emergency Measures in the Supply of Crude Oil and Petroleum Products. The Handbook contains a summary of the steps to be taken in a supply emergency and defines the roles and responsibilities of various stakeholders.

The use of publicly held stocks by the dedicated national stockholding agency is essentially the central element of Hungary’s emergency response strategy. These emergency stocks can be released by ministerial decree in the event of a supply emergency and can, if necessary, be complemented by demand restraint measures.

Hungary’s National Emergency Strategy Organisation (NESO) is chaired by the Minister responsible for energy, the Minister of National Development (MND), while other key ministries, the national stockholding agency and the oil industry are also represented in the NESO. The NESO secretariat is comprised of MND staff and is responsible for organising regular training exercises and maintaining relations with the IEA and the EU on matters pertaining to emergency policy. Hungary’s emergency Handbook specifies that NESO meetings should take place on an annual basis.

All public emergency stocks are held by the national stockholding agency, the Hungarian Hydrocarbon Stockpiling Association, known as HUSA. HUSA is an independent, non-profit organisation, financed by compulsory membership levies imposed upon companies involved in the import and/or internal distribution of oil products in Hungary. The Stockpiling Act obliges HUSA to hold stocks at a level equivalent to at least 90 days of net imports; at least one third of emergency stocks held by HUSA must be in the form of oil products.

Hungary’s Stockpiling Act states that emergency oil stocks are to be released when there is a major supply disruption or a crisis in crude oil or oil products supply (article 9(2)). A major supply disruption is defined as an occasion when there is a “substantial and sudden drop” in the “supply of crude oil or petroleum products to the EU or to a member state, irrespective of whether or not it has led to an international decision to release stocks” (article 1(3) of the Stockpiling Act). It is explicitly mentioned that Hungary’s emergency response system will not be triggered solely by price fluctuations.

In the event of a major supply disruption, the drawdown of stocks is ordered by the MND after consultation with NESO members and the receipt of written authorisation from HUSA. Stocks would be first distributed to selected priority consumers, then to the oil industry members of HUSA, with the quantities received by each company being proportional to their contribution fees, which, in turn, are proportional to their sales volumes in the calendar year immediately preceding the release of the stocks. It is estimated that physical deliveries of emergency stocks would take place within 48-72 hours of the Minister authorising a drawdown. The purchase price for the released stocks would be based on the market price with a premium, and the law stipulates that it must be higher than the original acquisition price of the stocks.

Hungary has been consistently compliant with the IEA’s minimum stockholding obligation, with public stocks fully covering 90 days of net imports.

All of Hungary’s public emergency stocks are owned by HUSA and stored within commercial storage terminals in dedicated tanks separate from commercial stocks. The Hungarian Stockpiling Act lays out strict controls on accounting and monitoring of stock levels with HUSA regularly conducting inspections of facilities holding emergency stocks. The breakdown of emergency stocks into crude oil and specific oil products is determined by HUSA on an annual basis following a market assessment. Aside from their obligations to HUSA, Hungary does not impose a direct stockholding obligation on the oil industry.

While a stock drawdown is the central element to Hungary’s emergency response strategy, the MND also has the power to decree demand restraint measures to restrict consumption in the event of a supply emergency. Hungary distinguishes between three levels of demand restraint: light-handed, medium-handed and heavy-handed measures.

The light-handed measures can be executed within a few days and would result in a 2% to 4% reduction in consumption. They include:

The medium-handed measures would take one to two weeks to implement and would result in a 4% to 8% reduction in consumption (including the aforementioned light-handed measures).