Japan’s electricity system was severely affected by the 2011 Great East Japan Earthquake and the Fukushima nuclear accident, after which all nuclear power generation was temporarily stopped, which until then represented around 25% of generation. Since then, nuclear represents only a minor share of Japan’s electricity generation. Natural gas is the most important fuel for generation, followed by coal. Oil’s share has been decreasing, but old oil powered facilities played a crucial role in the immediate aftermath of the 2011 earthquake.

As an island country with no cross-border interconnections, Japan needs to balance its electricity production and consumption itself. There are 10 areas, each with its own transmission system operator, and for historical reasons the country is split into two technologically different regions, running on 50 Hz and 60 Hz respectively. This creates specific needs for sufficient interconnections capacity and proper coordination between the two regions. Following the 2011 earthquake, a coordinating entity for the 10 TSOs (transmission system operator) was created – the OCCTO (Organisation for Cross-regional Coordination of Transmission Operators). OCCTO can act in a disruption to coordinate power exchange between different regions. It shares vital information with the national administration, and in normal times provides preparedness services such as setting minimum generation reserve margins in each area and identifying priority customers. OCCTO also monitors the need for new capacity and can raise funds for this purpose and develops a cross-regional interconnections plan.

For historical reasons, there are two different systems in Japan which developed independently, running on two frequencies – 50 Hz in the east of the country and 60 Hz in the west. Only three frequency converter facilities connect the two areas, with a total capacity of 1.2 GW. There are plans to increase this interconnection capacity to 3 GW by 2027. Eastern Japan has a generation capacity of around 130 GW in the eastern part and the western part around 160 GW.

Most power lines in Japan (some 96%) are overhead lines, which reduces recovery time after a disruption but also increases the risk of it happening.

There are plans to increase connection domestic transmission capacity, e.g. a project to increase capacity between Honshu and Hokkaido from 600 MW to 900 MW by 2019, which should help promote wind power generation on the northern island Hokkaido.

There are 10 regional TSOs in Japan. According to the Electricity Business Act, each TSO is responsible for grid management and system security in its territory. For better coordination among these TSOs, the OCCTO was established, following the 2011 Great East Japan Earthquake.

The 6th Strategic Energy Plan released in 2021 sets the introductory prospect for electricity storage battery as 24 GWh by 2030 (ten times larger than 2019) for households and industry. 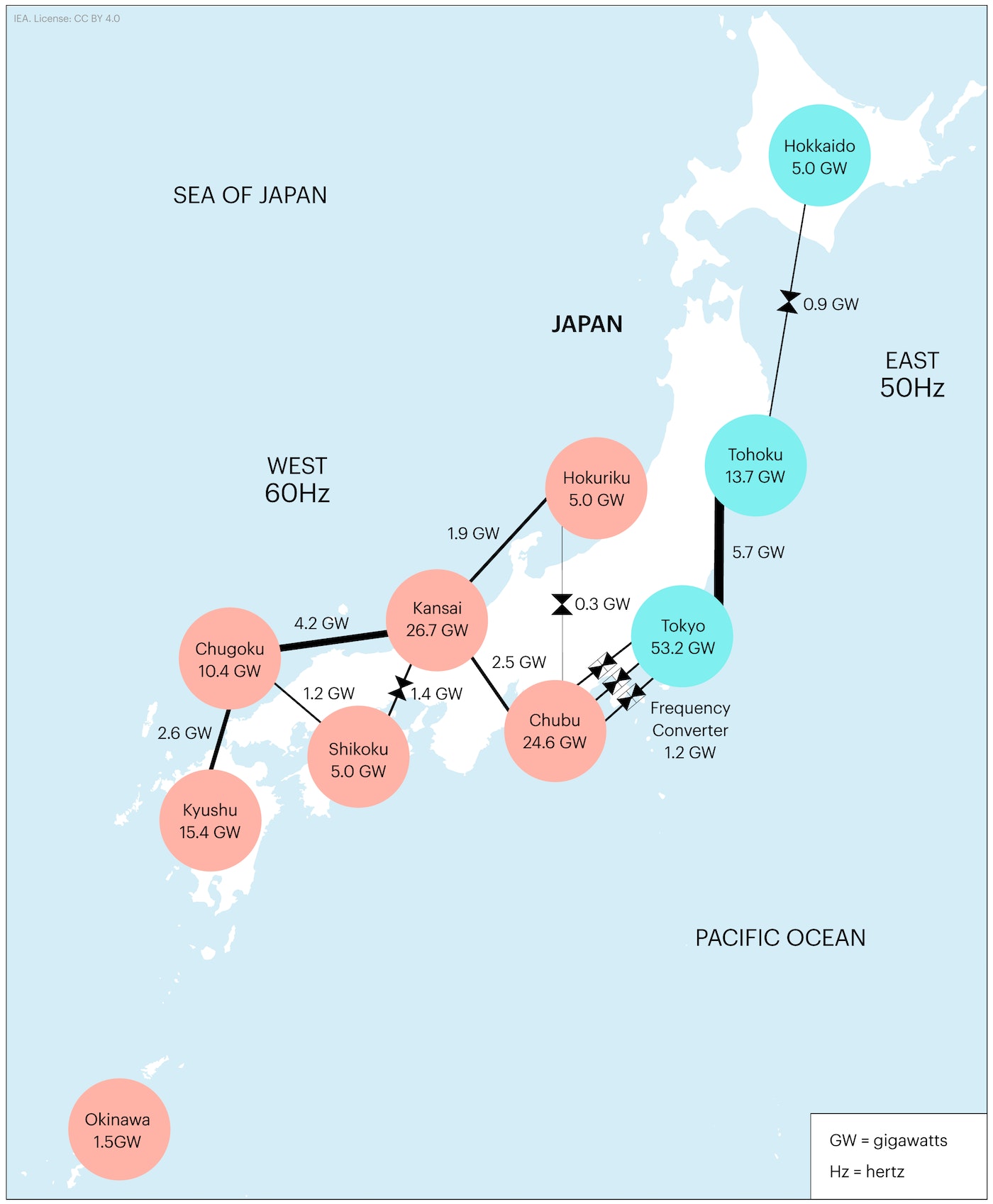 A crucial step towards better coordination and an increased security of supply was the establishment of the OCCTO following the 2011 Great East Japan Earthquake Now the 10 TSOs can effectively cooperate in an emergency following OCCTO’s instructions. The OCCTO shares vital information with METI (the Ministry of Economy Trade and Industry), such as blackout areas and capacity of inactive power plants. In case of a supply shortage or instability in a particular area, the OCCTO enhances cross-regional electricity use and gives orders for electric utilities including power producers, TSOs and retail electric operators to supply more electricity in order to maintain stable electricity supply. In case the supply side measures are not sufficient, the government can ask individual large customers to cut their consumption for a certain period of time.

The OCCTO monitors companies to make sure that each local area maintains a sufficient generation reserve margin of at least 3%. If a large power plant stops by accident and some area is faced with a supply shortage, the OCCTO enhances the cross-regional electricity use to avoid a black out in that area. If necessary, METI can order electric utilities to supply more electricity by using all the generators they own. If OCCTO determines that there might be a supply capacity shortage in the future, it announces the need for construction of new generators to the electricity companies and raises funds for the purpose. The OCCTO also developed a cross-regional operation system within which real-time supply-demand balance and generator outputs are monitored and supply-demand plans from generator and retail companies are reviewed. The operation system also serves as an information hub for imbalance settlement.

All TSOs and DSOs (distribution system operators) have automated remote control and monitoring systems which allow to quickly identify and bypass problematic sections in the grid. The relevant companies (i.e. TSOs, DSOs and generators) and METI have concluded an information sharing agreement, based on which METI is informed about any difficulties, causes and timeframes. All the companies are also using private secure networks to rapidly share information.

The administration conducts annual disaster prevention drills every September to test cooperation with local governments and infrastructure operators. Furthermore, METI holds training exercises just with the TSOs several times a year and also the TSOs themselves are holding training exercises for various scenarios with a similar frequency. Typical scenarios involve restoration of electricity supply to an area hit by an earthquake. Due to the importance of natural gas for Japan’s electricity generation, gas companies are also invited by the TSOs to participate in the exercises.

There is no regulated minimum spinning reserve capacity, and each TSO has its own practice. It is unclear how much total black start capacity there is in the country. While location and other criteria are also important to judge the adequacy of black start capacity, the 8% of the total installed capacity of pumped hydro as of 2020 (which could be used for black start) would put Japan into a rather comfortable position (the OECD average is 5%).

METI has the authority to instruct commercial-scale utility customers to cut electric power consumption for a certain period of time to avoid a supply shortage. Following the establishment of OCCTO in 2015, in cooperation with the TSOs, preparatory measures were taken to identify vulnerable customers/priority users. However, there are no clear rules set by METI on how to identify these users or critical infrastructure in general. There is also no mechanism for obligated fuel reserves in critical infrastructure and the TSOs don’t have any mandate to verify these.

Commercial demand response plans are increasingly used after the inauguration of a new megawatt trading market in April 2017. Some TSOs have procured power generation resources to balance electricity supply and demand in their grid through the process of public procurement. About 1 GW demand response resources were acquired in the procurement process, to respond to unexpected weather conditions. However, market-based response might be hindered by the fact that prices are still formed based on costs rather than on scarcity in Japan.

The June 2020 Act for Establishing Energy Supply Resilience stipulates the establishment of a collective action plan for electricity network operators to ensure electricity supply reliability in cases of disaster. The Act requires general power transmission and distribution business operators to formulate a disaster cooperation plan in advance, with the aim to facilitate cooperation with related organisations in the event of a disaster. Also, the Act stipulates the establishment of funds in advance between power transmission and distribution business operators in preparation for disaster response, and to establish a mutual aid system that will be issued from the reserve in the event of a disaster.

Japan does not have a dedicated strategy on climate resilience per se, but has already established sophisticated policies to counter any disruptions stemming from natural disasters, which could also be used to strengthen Japan’s climate resilience strategy. The Japan’s 6th Strategic Energy Plan released in 2021 also focuses on overcoming the challenges that Japan’s energy system face, including providing stable energy supply against natural disaster, through extraction and assessment of different scenarios.

Along with the retail market liberalisation, there is a large number of smart meters scheduled to be deployed in Japan – the administration estimates as many as 80 million in early 2020s. In 2020, the total number of installed smart meters was already 61 million. This brings additional risk in terms of cybersecurity and personal data protection, largely increasing the possible attack surface in addition to “traditional” cyberattack targets such as power control systems. Japan has therefore developed security guidelines both for smart meters and for power control systems, which must be followed by the operators – the Electricity Business Act was revised in 2016 accordingly to reflect these changes. One of the guidelines prescribes that all smart meters must be audited for cybersecurity, but operators may carry out these audits themselves. In April 2017, the Japanese electricity industry established Japan’s E-ISAC (Electricity-Information Sharing and Analysis Centre) with the aim of sharing best practice, exchange of information related to vulnerabilities and cyberattacks, and extending cooperation with other ISACs overseas.