Oil provides the largest share of Lithuania’s total energy supply. As domestic production is marginal and is all used in the petrochemical industry, Lithuania is fully reliant on imports to meet its oil needs. At the same time, Lithuania’s domestic refinery has the capacity to produce oil products well in excess of domestic demand, making Lithuania a net exporter of refined products, principally to neighbours (Latvia, Ukraine, Poland, and Estonia) but also further afield (The Netherlands, United States).

Lithuania’s oil supply infrastructure is robust relative to its domestic demands, reflecting the role of its refinery as the only one in the Baltic region. Orlen Lietuva owns and operates the Mazeikiai refinery (205 kb/d capacity) as well as the crude oil pipeline (242 kb/d capacity) which connects with the Butinge sea terminal (280 kb/d import/export capacity). The Butinge terminal has been operating as an import terminal since 2006, following the closure of another crude pipeline connecting the refinery to the Druzhba trunk pipeline system through Belarus. As a result, Lithuania has diversified its crude oil import sources.

Lithuania’s emergency response policy relies primarily on the use of emergency oil stocks with the ability to implement short-term demand restraint measures. Lithuania maintains a combination of both public-held agency stocks and industry-obligated stocks. In an IEA collective action, Lithuania could contribute by lowering the stockholding obligation set on industry, following a decision by the Minister of Energy, or with the release of public stocks based on a decision by the Council of Ministers.

There are two main crude oil pipelines in Lithuania, however only one remains in operation, connecting the Butinge Oil Terminal and the Mazeikiai refinery (92 km length). This line is owned and operated by Orlen Lietuva, and has a design capacity (import/export) of 14 million tonnes per year (283 kb/d). Since 2006, the pipeline has only been used for imports (from the Butinge terminal to the Mazeikiai refinery).

The other pipeline connecting Lithuania’s refinery to Russian crude supplies, Polock-Birzai-Mazeikiai (Belarus-Lithuania), was designed to supply 16 million tonnes per year (323 kb/d), however this branch of the Druzhba has not been in operation since July 2006 due to a reported technical malfunction.

Lithuania’s only product pipeline is the Ilukste-Birzai-Ventspils (Latvia-Lithuania-Latvia), transporting diesel to the north of the country. The pipeline length in Lithuania is 87 km and annual throughput capacity is 6 million tonnes of petroleum products (123 kb/d).

Lithuania’s Butinge Oil Terminal is exclusively dedicated for importing crude oil for the domestic refinery. The terminal is owned and operated by Orlen Lietuva and situated in western Lithuania near Palanga. It is a single point mooring terminal with a design capacity of 14 million tonnes per year (283 kb/d). From 2015 to 2019, the terminal’s average import volume amounted to 9.4 million tonnes per year (190 kb/d).

The Port of Klaipeda, located on the central part of the Lithuanian Baltic Sea coast, is the northern most ice-free port on the eastern coast of the Baltic Sea. It is the most important and biggest Lithuanian transport hub and fulfils the important role of importing and exporting petroleum products. Klaipedos Nafta or “KN Oil Terminal” is majority owned by the state (72.3%), represented by the Ministry of Energy, and a 10.41% shareholding is held by Achema Group, a private company; the remaining ownership shares traded on Nasdaq Vilnius. The terminal is able to handle both crude and refined products, offering loading and discharging services between tankers and rail cars, and tanker truck loading for regional diesel and gasoline supplies. The total annual import/export capacity is eight million tonnes (160 kb/d).

Additionally, the JSC “Kroviniu Terminalas”, adjacent to KN Oil Terminal, specialises in handling oil products and petrochemicals, with a capacity to handle up to two million tonnes per year (40 kb/d). The terminal can handle and discharge products from both rail-tanks and tankers, and offers mooring services, cargo forwarding and transportation by rail within Lithuania, Belarus, and Latvia.

Lithuania’s Orlen Lietuva refinery is the only refinery in the Baltic states. Owned by PKN Orlen, the biggest Polish oil company, it is located in the northwest of Lithuania, near the city of Mazeikiai, 90 km from Lithuanian terminals in Butinge, Klaipeda, and Latvian Ventspils. The refinery entered operation in 1980 with a design capacity of 15 million tonnes of crude oil per year, however its current maximum capacity is 10.4 million tonnes per year, or 205 kb/d.

The main deliveries of crude oil come via the Butinge Oil terminal and a dedicated Butinge-Mazeikiai pipeline (both owned and operated by Orlen Lietuva).

Modern processes and technologies applied by the refinery have allowed it to produce a wide and flexible range of high-quality refined products that meet regional standards, with light-refined product yields currently at 72.5%. PKN Orlen is planning to invest in a bottom-of-the-barrel (BoB) processing upgrade, which would increase the refinery’s diesel, gasoline and jet fuel yield by around 10 percentage points.

Lithuania’s total oil storage capacity amounts to 2.88 million m3 (18.1 mb), entirely consisting of above ground tanks. Storage capacities for crude oil account for a fifth of the total (3.89 mb) and are located at the Butinge Oil Terminal (1.93 mb), the Orlen Lietuva refinery (1.26 mb) and at the Klaipedos Nafta oil terminal (0.7 mb).

Storage for refined products amounts to 14.2 mb and are primarily located in the Orlen Lietuva refinery (3.27 mb), the Butinge Oil Terminal (4.81 mb), the Klaipedos Nafta and Kroviniu terminals (3.18 mb) and in the Subacius oil terminal (2.25 mb). The Subacius oil terminal, located 150 kilometres north of Vilnius, is an inland oil product storage facility that provides both long-term storage for Lithuania’s emergency stocks (1.6 mb) and short-term storage and handling for commercial stocks. 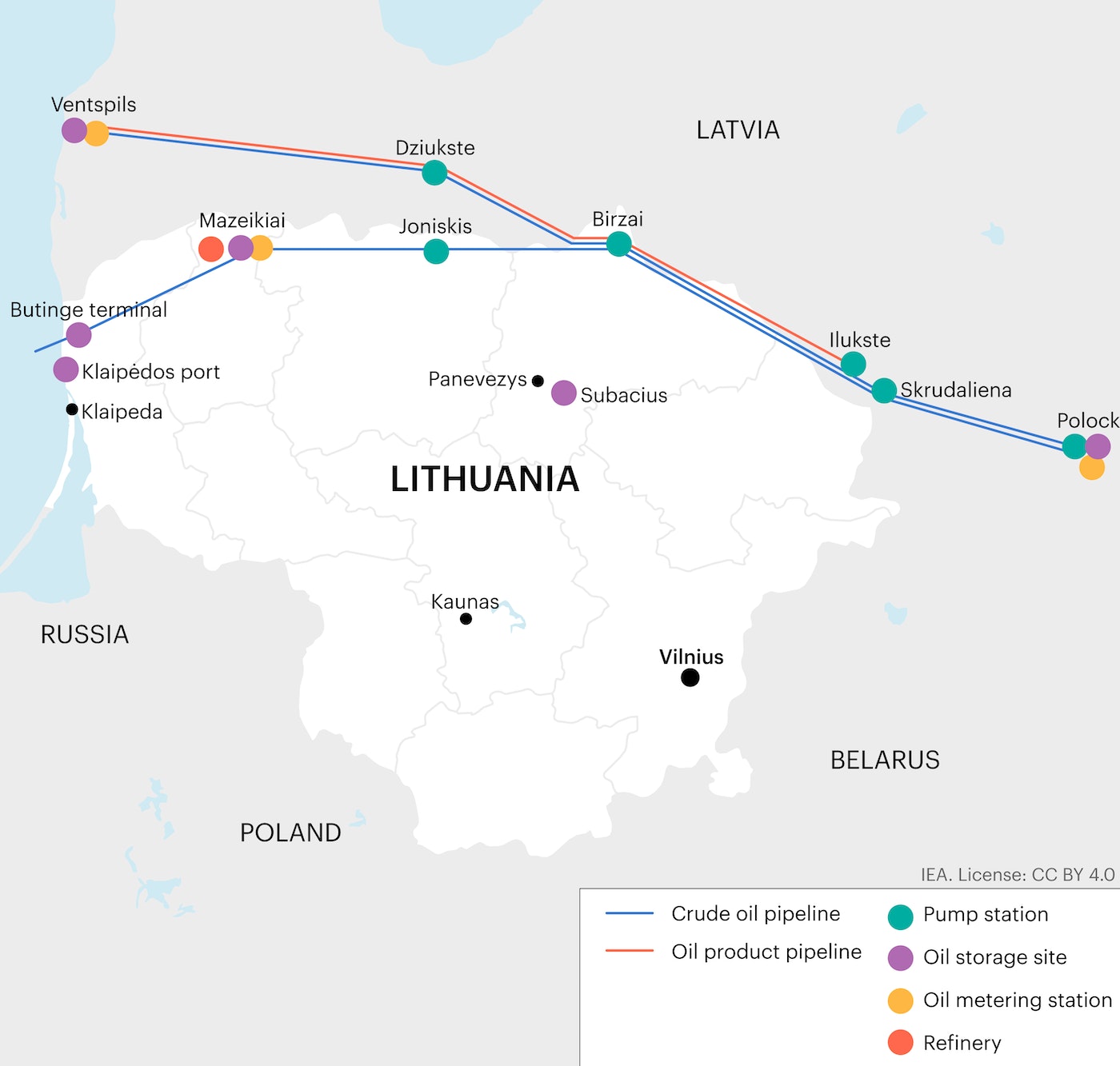 Emergency response for oil crises has a legal basis in the Law on State Stocks of Petroleum Products and Oil, Law No. IX-986 (Law on Stocks). The law establishes the level and manner in which emergency oil stocks are to be held and provides the legal powers for activating emergency response measures. This law transposes the EU Directive on oil stocks (2009/119/EC). On 25th June 2020, the Lithuanian Parliament adopted amendments to the Law on Stocks, which allow Lithuania to activate emergency measures in order to participate in an IEA collective action.

The Lithuanian Energy Agency (LEA) is responsible for overseeing emergency oil stockholding as well as advising the Ministry on a national energy strategy, including the development of demand restraint measures, renewable energy sources and the implementation of energy efficiency measures.

In the case of an oil crisis, the ESOC would prepare an assessment and recommendations for emergency response to the Minister of Energy, who could decide to lower the stockholding obligation of industry. The Council of Ministers would need to approve the use of LEA’s public stocks.

According to the Lithuanian Law on Stocks, the country's oil stockpiles must be sufficient to cover 90 days of average daily net imports or 61 days of average daily inland consumption in the previous year, whichever is greater. This is consistent with the EU stockholding requirement (Council Directive 2009/119/EC imposing an obligation on member states to maintain minimum stocks of crude oil and/or petroleum products), and in the case of Lithuania, the relevant obligation level is 90 days of net imports. Under this law, the LEA is responsible for maintaining 30 days consumption of publicly held emergency oil stocks, and an obligation is set on industry to maintain the remaining level necessary to reach the 90 days of net imports.

According to IEA methodology, Lithuania’s total level of oil stocks is well above the IEA 90-day minimum requirement.

The emergency oil stocks held by the LEA are designated as “specific stocks” under EU methodology, and as such are held entirely in the form of refined products. According to EU methodology, specific stocks must consist of oil products which account for at least 75% of those products which are consumed in the country; for Lithuania, diesel and motor gasoline are sufficient to meet this rule. Thus, all of the LEA’s emergency stocks are held in the form of diesel and motor gasoline, which are held entirely in above ground tanks at the Subacius oil terminal.

The stockholding obligation set on industry is calculated each year, based on Lithuania’s total 90-day net import obligation minus the 30 days of consumption of specific stocks held by LEA. There are 17 companies with stockholding obligations in Lithuania, and by 30 April each year the Ministry’s Energy Security Policy Group informs each company of the quantity of stocks it must hold as of 1 July. Obligated industry stocks can be held in the form of crude oil, intermediate or refined products or blending components intended for refining into finished products.

Data in oil stocks for Lithuania are shown as of February 2022, as it joined the IEA officially as a member in 2022.

While the release of emergency oil stocks is Lithuania’s primary response to a supply disruption, short-term measures to reduce oil demand can also be implemented. The LEA has developed and quantified a series of measures which can be implemented by government decision during a domestic emergency and as Lithuania’s contribution in an IEA collective action.

The LEA assumes that the maximum effect can be achieved with a short-term restriction, i.e., approximately 30 days. Three measures have particularly large impacts, namely driving bans resulting in a 9.9% fuel savings, fuel rationing for freight transport resulting in 7.5%, and the lowering of speed limits resulting in 5.2%. Other measures could achieve savings in the range of 1.20% to 2.23%. Based on the volumetric savings from these measures, it would be possible to formulate a combination of measures able to attain the level of 10% savings required as a member of the IEA.

Data for OECD countries up to June 2020