The electricity sector faces several challenges. First, Norway will see its electricity consumption grow significantly due to further electrification of the economy and the emergence of new energy-intensive businesses, such as data centres. Secondly, due to its geography and concentration of the population in cities in the south, the country needs significant investments in new generation sources and grid expansions to remove network congestion problems, which would also reduce the large electricity price differences between regions. Other challenges, including needed demand side security measures, establishing the first offshore wind projects and regulatory support for onshore wind and solar developments, add additional pressures to the future development of Norway’s electricity market.

Statnett, owned by the Ministry of Petroleum and Energy (MPE), is the only TSO in Norway and owns 98% of the transmission grid. The rest is owned by 13 regional grid companies and rented to Statnett. Statnett’s ownership was unbundled since 2002. Statnett is in line with European Union (EU) regulations, and its revenues are regulated by the Norwegian Energy Regulatory Authority, or NVE-RME, which also issues rules and regulation on system responsibility, quality of delivery, connection duties and tariffs.

Norway has a sizeable transmission network of over 11 000 km due to its geographic length and the location of its hydro power stations. The transmission grid in the country is divided into four subsystems. Since 2015, Norway added 1 065 km of high-voltage lines and has several other ongoing projects to add additional high voltage lines by 2026.

Norway is divided into five bidding zones, and the lack of transmission capacity from north to south results in large price differences. Due to good international interconnections, prices in the south are linked to prices in continental Europe.

The previous government established a Grid Development Committee tasked with assessing options to speed up development and building of grid infrastructure projects. The committee is also tasked with looking into economic principles for grid development when demand is very uncertain, as well as considering improvements in the grid connection process.

Norway is part of a common synchronous area sharing the same frequency with Sweden, Finland and Eastern Denmark. Additionally, it has direct interconnections to the Russian Federation (hereafter “Russia”), the Netherlands, the United Kingdom and Germany.

Since 2015, Norway’s total cross-border capacity has increased from around 6 200 MW to 8 950 MW (export) and 9 245 MW (import). The increase was due to two new additions: NordLink to Germany and North Sea Link to the United Kingdom. NordLink has been operational since December 2020, with a capacity of 1 400 MW and North Sea Link started operations in October 2021, with a similar capacity of 1 400 MW. Apart from these, Norway has cross-border interconnections with Sweden, Denmark, Finland, Russia and the Netherlands.

NorthConnect has submitted a licence application for an interconnector between Norway and the United Kingdom, though consideration of this application has been put on hold because the Norwegian ministry says it needs to evaluate the two latest interconnectors before it can make a decision on the NorthConnect project.

By 2026 the oldest part of Norway’s connection to Denmark (Skagerrak 1 and 2) will have to be decommissioned due to technical wear and tear. Statnett is conducting a feasibility study to assess if and when it may be necessary to reinvest in this infrastructure that was first built in 1977 (the oldest parts to be decommissioned have a capacity of 500 MW out of a total of 1 700 MW between Norway and Denmark).

Statnett is also considering improving the capacity to Finland. The existing connection is a very long 220 kV AC line with limited capacity. Furthermore, the grid in northern Norway consists of weak 132 kV connections. As a result, controlling and limiting the flow on the line between Finland and Norway is very difficult, and is a challenge for operations. According to Statnett’s study, the best option to improve the capacity seems to be a back-to-back (BtB) high-voltage, direct current (HVDC) line. The capacity of such a solution could be in the range of 100–150 MW and could be implemented around 2025 at the earliest.

Due to a significant increase in domestic consumption forecast over the coming years, Statnett's short-term market analysis for 2021-2026 shows that the Norwegian power surplus may be reduced to 3 TWh in 2026 and trigger the need for more generation investments and more transmission capacity. New wind power, particularly in Sweden, will help keep the Nordic power balance stable, even with significant power consumption growth of around 40 TWh. In Sweden, the power surplus will increase significantly from around 25 TWh to around 40 TWh in 2026, and the surplus in northern Sweden will be as much as 60 TWh. Cross-border trade capacity puts Norway in a position to benefit from market developments in the region, without risking supply shortages.

The Ministry of Petroleum and Energy has overall responsibility for managing the power sector in Norway. The legislation for security of electricity supply and emergency preparedness is outlined in Chapter 9 of the Energy Act and the Regulation on Security and Emergency Preparedness in the Power Supply System. The former requires any grid company to keep its grid in good condition and sufficiently modernised, while the latter describes requirements to ensure electricity security and effective restoration in cases of outages. NVE produces regular sector reports, analysing the current state of the electricity sector and related risks, and conducts oversight over whether grid owners comply with the regulations. In case of a crisis, NVE would coordinate between government and market participants acting as an Emergency Management Authority, as indicated by the regulation.

The TSO, Statnett, is responsible for system operation and operational security, and is responsible for developing measures to deal with highly strained supply situations. These are known as ‘SAKS measures’, and their purpose is to reduce the likelihood of rationing.

The regulator (NVE-RME) is responsible for cybersecurity in the metering value chain, which includes smart metering systems and Elhub. The Metering Settlement and Billing Regulation includes detailed security requirements for smart metering systems and Elhub. As with general electricity security, grid owners and power producers are also responsible for their own cybersecurity, including security of their supply chains.

In an emergency, Statnett is responsible for the continuous operation of the power system. The Energy Act includes rules on electricity rationing, including enforced reductions of supply and requisitioning. Rationing can be introduced if required by extraordinary circumstances upon decision of the Prime Minister. NVE heads the preparedness and emergency planning of power supply and is also the rationing authority. Regulation relating to power system operation regarding handling of extreme situations came into force on 1 January 2005. This regulation aims to secure extreme situations and is not relevant for normal operation of the system. Through this regulation, Statnett is given an extended responsibility to continuously investigate and develop necessary measures to ensure that there is momentary balance at all times and to ensure the energy balance during the winter season and that adequacy can be sustained over crisis situations.

According to Norwegian regulations, Statnett can develop different remedial actions within the terms of the regulation on system operation, based on the following set of terms: 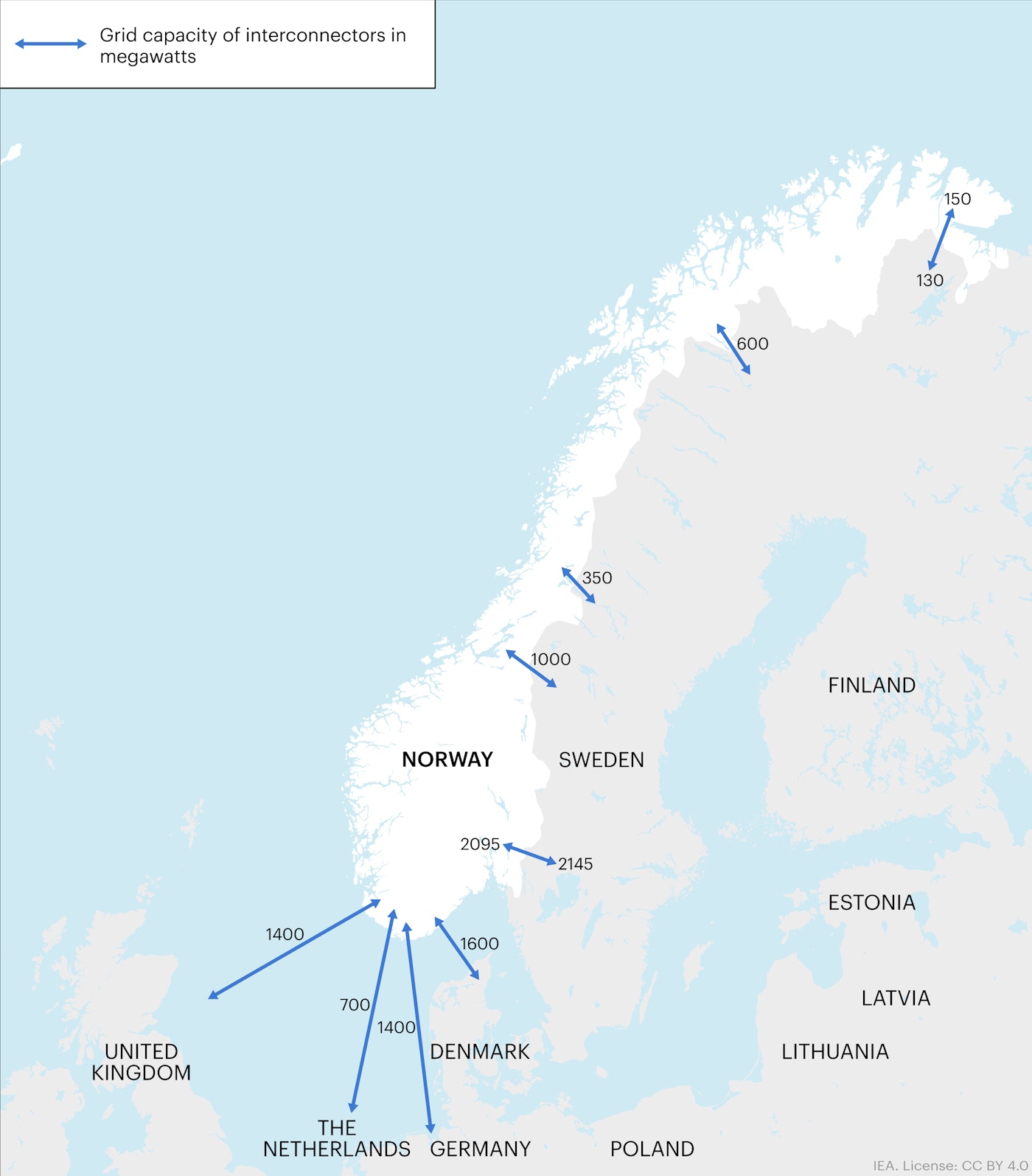 In its analysis for 2021-2026, Statnett assumes that the Norwegian power system adequacy, although strained at times, poses no risk of power rationing within the next five years.

Through legislation, however, Statnett is given an extended responsibility to continuously investigate and develop necessary measures to ensure that supply and demand are balanced at all times, especially during the winter season. The TSO can require mandatory participation in the balancing market, require power production (even when not part of the balancing market), and impose load shedding. System protection mechanisms in the transmission network can only be installed and operated based on decisions made by the TSO. Permanent and operational costs of the different measures undertaken by the TSO for ensuring security of supply, are handled within Statnett’s revenue cap.

Currently, Statnett is preparing changes to its operational model (Nordic Balancing Model), also with the aim of preparing for expected greater shares of variable renewables on the grid. The main amendments are the switch from 60-minute to 15-minute market resolution, to change the manual processes on the operator’s side to automated system response, and a change from control based in a synchronous area to control based within each of the five bidding zones.

While flexibility in the national power system has historically been provided by abundant dispatchable hydro generation, increased consumption in some important areas (including the Oslo area), reduces the availability of flexible supplies. In the future, flexibility will also have to come from the demand side. The Norwegian electricity system does not have capacity available outside of the market (i.e., strategic reserves) ready to react when the market cannot meet demand. However, Norway for a long time had a reserve market, connected to large industry consumers. Currently, Statnett is developing and testing a new set of products to be offered to the market that will allow for some additional demand flexibility in the system.

Statnett also has two mobile 150 MW gas turbine plants to be used in case of electricity scarcity, for example because of hydrological conditions. A precondition for initiating reserve power generation is the probability of electricity rationing of more than 50%.

Norway’s peak demand is managed through market mechanisms, where price signals for the day ahead, intraday and balancing markets provide incentives for market participants to adjust consumption and production.

Norway does not have electricity system reliability standards set by legislation, such as loss of load expectation (LOLE). Nonetheless, the TSO complies with a set of internal indicators; for instance, a 200 MW loss for 30 minutes standard is seen by the TSO as a manageable system failure. A standardised system for registering and reporting faults and interruptions (FASiT, Fault and Interruption Statistics in the Total network) is used to monitor system performance. It includes both long interruptions (of more than three minutes) and short ones (of up to three minutes). All network companies are obliged to report specific interruption data to NVE once a year.

The large share of hydropower production makes the Norwegian power system vulnerable to variations in water inflow and precipitation. Every week, water level in the 489 largest hydropower reservoirs are measured – accounting for 96% of the total reservoir capacity.

Norway, like almost all countries in the world, has to deal with the impact of climate change and related impacts on its electricity infrastructure. Although the TSO and DSOs comply with their internal standards in this regard, Norway lacks legally binding climate resilience standards for now. Extreme weather events and changing precipitation patterns, in addition to gradual warming of the climate, are likely to have adverse effects on the resilience of electricity supply and networks and can potentially lead to interruptions of the power supply.