This project under the Hydrogen TCP focuses on demonstrating the technical, economic and social viability of underground hydrogen storage (UHS). The project supports the acceleration of safe implementation of UHS through co-ordinated collaboration and knowledge dissemination, by bringing together research and industry organisations across the world and linking related scientific industrial and societal disciplines.

Many steps need to be taken before safe and responsible large-scale deployment and commercialisation of UHS becomes reality. Timely preparation is vital, as development will take many years and the demand for large-scale underground energy storage is expected to increase rapidly.

How could the project be explained to a high school student?

In future renewable energy systems, hydrogen could play a key role in transporting and storing energy. Energy storage will become more important because renewable energy sources such as wind and solar are not always available when needed.

Hydrogen can be produced by splitting water with renewable electricity via a process called electrolysis. As a fuel, hydrogen can be used in vehicles and to produce heat and electricity for industry and buildings. It can also be stored underground in large quantities for a long time to be used later when needed.

Hydrogen is already stored underground in salt caverns in a few places in the United Kingdom and the United States but these sites have not been tested to see if hydrogen can be rapidly injected and extracted as wind and sunshine vary. Hydrogen could be stored in gas fields but there is little experience of this option.

By bringing together national and international research projects, this project seeks to answer questions such as: how does hydrogen interact chemically with the rocks it is stored in? Will microbes in the underground reservoirs consume the hydrogen, introducing impurities? How does the hydrogen move in the pores of the underground reservoir? How much hydrogen is lost when it is injected and extracted?

How does the project help to achieve climate and energy goals? 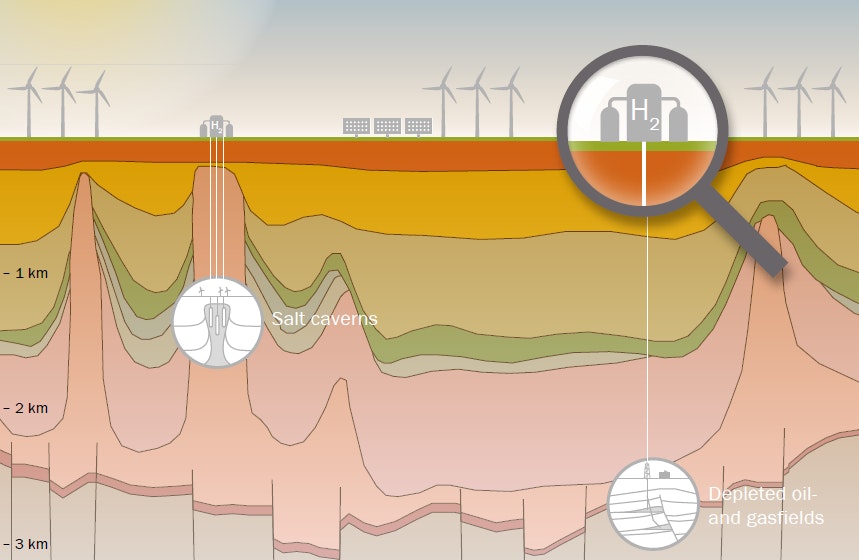 Cross-section of the subsurface showing formations where hydrogen can be safely stored. Storage caverns can be created in pillar-shaped rock salt formations. In gas fields, hydrogen can be stored in rock pores under an impermeable clay or salt layer. Source: TNO, Netherlands.

The Ministry of Economic Affairs and Climate Policy of the Netherlands supports the project coordinator. Participants in the task have their own funding for their research activities.

About the Hydrogen TCP