IEA (2022), Empowering people to act: How awareness and behaviour campaigns can enable citizens to save energy during and beyond today’s energy crisis, IEA, Paris https://www.iea.org/commentaries/empowering-people-to-act-how-awareness-and-behaviour-campaigns-can-enable-citizens-to-save-energy-during-and-beyond-today-s-energy-crisis

A global focus on the demand side of the energy equation has never been more important. Supply uncertainty, high prices and urgent climate targets all point to the value of energy efficiency and energy savings. Governments are responding with various measures including targeted grants and demand-reduction campaigns. At the IEA’s recent 7th Annual Global Conference on Energy Efficiency, energy ministers from around the world agreed that “energy efficiency and demand side action have a particularly important role to play now as global energy prices are high and volatile, hurting households, industries and entire economies” and called on “all governments, industry, enterprises and stakeholders to strengthen their action on energy efficiency.”

Well-designed campaigns can motivate people to reduce their energy use. For example, in the United States, some estimates suggest that up to 20% of home energy demand could potentially be saved from behavioural changes in the residential sector. One estimate for India suggests the potential for energy savings through behavioural adjustments to be in the range of 3.4 to 10.2 TWh per year by 2030. The IEA’s 2021 report The Potential of Behavioural Interventions for Optimising Energy Use at Home shows that campaigns can achieve a wide range of impacts in terms of amounts of energy saved. Even beyond today’s energy crisis, IEA modelling highlights the importance of behavioural measures for achieving net zero targets.

Many lessons have been learned on how to design awareness and behaviour change campaigns to achieve maximum effect. It is clear that good design matters – simply transmitting information will not change behaviour and poorly designed campaigns often do not deliver their expected impact. The choice of message, the tone, how the campaign is designed and the transmission channels, can all fundamentally affect the resulting impact on behaviour. Four key concepts are crucial:

The correct messaging sets the foundation for an effective awareness campaign.

The first choice is narrative: what themes or stories will be used to communicate the issues and prompt the desired actions. Campaigns typically focus the narrative around three approaches:

Getting the message right

America saves (2021). 12 ways to save energy and money, https://americasaves.org/resource-center/insights/12-ways-to-save-energy-and-money/.

2. The environmental approach: the Become Part of the solution campaign directly links climate change to the threatened extinction of polar bears and recommends energy efficiency action as a key part of the solution.

3. The social approach: messages relating to being a good citizen, appealing to social norms or the general good. These messages are particularly relevant during an energy crisis, as with the 1973 Danish energy crisis, more recent energy supply pressures in Japan and Korea, and the current energy crisis resulting from Russia’s invasion of Ukraine.

Experience shows that a campaign is more likely to succeed when based on messages and narratives that are:

Focusing on the multiple benefits of energy efficiency such as health and wellbeing, or comfort, can help people relate to the topic. By talking about addressing comfort levels, the Let’s live warmer campaign in Lithuania increased the number of applications for home renovations by four-fold in two years from 2009 to 2011. The Wisconsin focus on energy project highlights the concept of a person’s energy ‘footprint’ and shares local success stories to promote local relevant and repeatable projects.

Testing messages and narratives with relevant audiences in advance is key. A greater understanding of what resonates with different groups allows the campaign to be fine-tuned, making a huge difference in a campaign’s success.

While tailoring the message for a specific audience is key, packaging the message and sharing it widely is equally important. Governments have historically used public service announcements to share information on new programmes and services. Behavioural campaigns share some features with public service announcements but tend to go further by inspiring people to act. To get messages across, the following best practices have emerged from current and previous campaigns:

Getting the message across 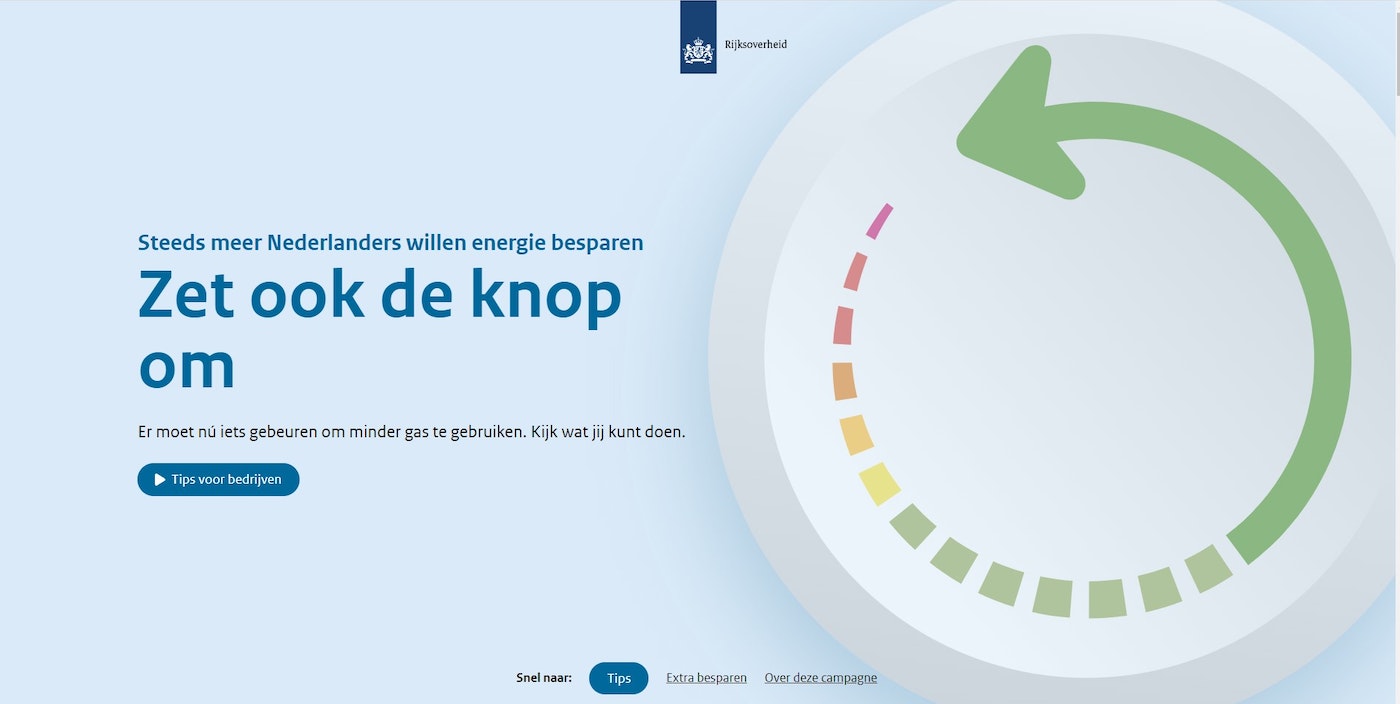 An important consideration is the question of who is the messenger. Many campaigns, implicitly or explicitly, involve the government speaking to citizens. Their impact thus depends on how people perceive the government’s trustworthiness, authority and credibility on the topic. Similar questions arise when governments partner with companies such as energy utilities. Such campaigns are unsuccessful if citizens feel they are being asked to solve a problem they see as being someone else’s responsibility. Some campaigns employ celebrities or ‘influencers’, which can provide greater recognition if done well, but need to be carefully thought out in terms of likely effectiveness, credibility and reputational risk.

Simple, well-structured and well-communicated energy-saving advice can motivate citizens to act. For example, clear messages such as those in IEA/European Commission’s Playing My Part have received widespread recognition, such as the significant impact of simply turning down heat thermostats at home. However, while good information is essential, it is not enough. Without well-crafted messages and design, simply presenting facts such as how much energy can be saved will not lead to significant behaviour change. To achieve sustained change, policymakers can learn from behavioural science and employ digital tools, nudges and incentives to continue stimulating energy-saving behaviour. The following tips have been shown to deliver better results.

Government Of Ireland 2022 Reduce Your Use, https://www.gov.ie/en/campaigns/6ca43-reduce-your-use/.

Behavioural insights specialists have been studying the impact of social norms, price signals, social media, digital technologies and other drivers on people's willingness to change behaviour. Using such insights can greatly enhance the success of awareness and behaviour change campaigns.

Crisis situations create particular challenges for energy systems, and also change the kinds of messages and campaigns that might be most effective. When energy is in the news, and when changing behaviour gives an immediate and directly visible benefit (increased comfort, lower costs, reduced risk of blackouts), campaigns can be stronger in calling for collective action and go further in what is asked of people.

Many countries already have experience developing and launching citizen-oriented campaigns in response to energy supply crises. For instance, after an earthquake hit off its north-eastern coast in March 2022, Japan launched a campaign encouraging businesses, utilities and citizens to drastically cut energy. Within a day, electricity demand savings reached 6.5% in the Kanto region. In the aftermath of the March 2011 earthquake and tsunami, a demand-reduction campaign relied on a whole-of-society response based on an appeal for solidarity and shared action. The campaign focused on “setsuden,” or electricity savings, to unite the country in its response to the crisis. The government launched “Super Cool Biz” campaign to motivate workers to dress in cooler outfits to better tolerate warmer offices during summer. Not only were there significant immediate energy use reductions, but a large proportion of the efficiency gains were sustained for many years beyond the original crisis.

In 2018, the Day Zero campaign in South Africa prepared the citizens of Cape Town for an anticipated water shortage crisis, asking people to consume less water to avoid a city-wide water shut off. The city ran an effective communication campaign focused on inclusivity, relying on behavioural nudges, as opposed to solely depending on restrictions and fines. According to the research carried out during the crisis by the Environmental Economics Policy Research Unit (EPRU) of the University of Cape Town, people were more likely to conserve water knowing that they were working towards a common goal. The Cape Town Water Map, an example of the so-called ‘green nudging’, openly showed the range of households’ water usage and allowed for comparison with neighbours.

New Zealand, which generates much of its electricity from hydro, experienced electricity shortfall during a drought in 2008. A government-led information campaign, which targeted both residential and small commercial sectors, resulted in national electricity savings ranging from 3.6% and 6.9%. In Korea, a campaign in response to the energy supply crisis caused by a heat wave in 2011, reached 1.5 million households, reducing electricity demand by 2% compared to the previous year.

Many crisis campaigns relate to short-term outage risks, for example when electricity systems are reaching capacity limits, as seen recently in the USA, Japan and other places. Effective communication is vital to encourage short-term behaviour change, i.e. switching things off. In Australia, the Powershop’s Curb Your Power demand-response programme relied on volunteers with installed smart meters to curb energy consumption ahead of an extreme weather event. Notified by SMS, households were asked to reduce their energy consumption for one to four hours and were offered a discount on the next electricity bill. Such incentives are not uncommon, though messaging often tends to shift towards a more social, collective-action narrative. This is especially true in the case of campaigns seeking to change behaviour over a longer timeframe, rather than just an immediate supply shortage.

Many of the recent examples mentioned in this note fit into the current context of high prices and security concerns arising from Russia’s invasion of Ukraine, such as ``Stand with Ukraine: Let's stop fuelling war’’ campaign which presents home insulation as a direct protest action. Campaigns, launched by Members States and the IEA/European Commission’s Playing My Part, highlight the need to reduce reliance on Russian energy and thus support the Ukrainian people. In times of crisis, saving energy is coming to be seen by many as an example of citizen activism.

Campaigns in a crisis context 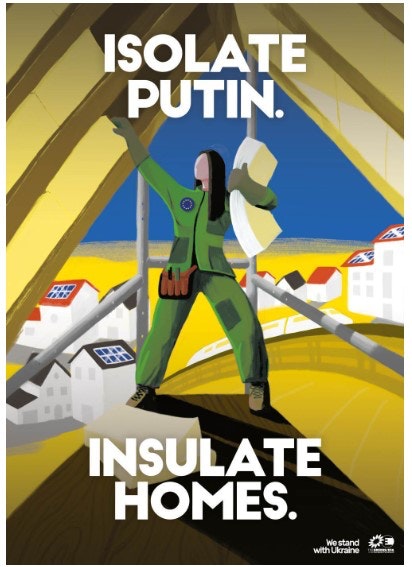 The Covid-19 health crisis saw a number of solidarity-driven campaigns asking citizens to work from home and quarantine to protect the most vulnerable groups in society. Several messages centred on the need to connect and share experiences in the midst of the pandemic. The current energy crisis facing the global community calls for a similar whole-of-society response to soften the social impact by reducing demand.