Governments around the world are setting increasingly ambitious climate targets while at the same time pursuing challenging national policy goals such as affordable and sustainable energy for all. In many cases, achieving these goals will require technologies that either do not yet exist, or are not yet ready for market, meaning innovation will be critical. Technology innovation can be a game changer across all sectors, including power generation, industry, buildings and transport.

Yet it is unlikely that any single country will be able to solve all of its energy and climate problems alone. International collaboration can help countries accelerate innovation processes by identifying common priorities and challenges, tackling pressing innovation gaps, sharing best practices to improve performance, reducing costs and reaching broad deployment of clean energy technologies. Given this massive potential, the fundamental question is not if countries should collaborate, but rather who should collaborate and how they can do so efficiently.

As part of the IEA’s efforts to support global energy transitions, we are working to help governments identify relevant collaborative partnership opportunities, engage with international partners and optimise possible synergies among existing initiatives. Our recent Energy Technology Innovation Partnerships report is a key step along this path, providing an overview of the global landscape of multilateral efforts relevant to energy technology innovation, and examining four selected collaborative partnerships. There are three key takeaways that highlight the challenges and potential of these efforts.

Achieving climate targets will require technologies that either do not yet exist, or are not yet ready for market

International collaboration in the field of energy technology innovation is not new – many countries already participate in numerous multilateral initiatives, some of which have been active for decades, such as The Technology Collaboration Programme by IEA (TCP) which was established in 1974. Today, 38 independent Technology Collaborations operate under the TCP, made up of over 6,000 experts from nearly 300 public and private organisations based in 55 countries, who work together on topics ranging from renewable energy and smart grids to hydrogen and nuclear fusion.

Governments have launched several new partnerships over the last decade, such as the Clean Energy Ministerial (CEM) in 2009 and Mission Innovation (MI) in 2015, which both aim to accelerate international efforts to address climate change. The 27 members of CEM collaborate to promote the deployment of clean energy technologies through over 20 initiatives and campaigns. Similarly, MI counts 25 members who have pledged to double clean energy RD&D spending and co-lead activities under eight key innovation challenges, such as clean energy materials and affordable heating and cooling in buildings. Participation in Technology Collaborations, MI and CEM present a great degree of overlap, as countries tend to join the full suite of collaborative partnerships. In fact, 13 countries and the European Commission participate each in more than 20 Technology Collaborations, CEM and MI: the United States, Japan, Korea, Canada, China, Germany, Australia, France, Sweden, Finland, Italy, Norway and the United Kingdom. This “core” group of decision makers is in a strong position to pursue further synergies across partnerships.

There are also many relevant regional partnerships that are making valuable contributions to energy technology innovation, such as the European Technology and Innovation Platforms (EU-ETIPs), which bring together EU governments and companies to identify research priorities and relevant energy innovation strategies.

Other examples of regional partnerships include mechanisms under the African Union and other African regional partnerships; the Asia-Pacific Economic Cooperation and the Association of Southeast Asian Nations; various partnerships in the Middle East; and the Latin American Energy Organisation and the Organisation of American States. Many other partnerships focus on specific themes of interest, such as the Biofuture Platform, a group of 20 countries seeking to advance sustainable bioenergy and facilitated by the IEA.

As the global landscape of multilateral activities relevant to energy technology innovation becomes increasingly diverse and complex, it can be challenging for policy makers to identify which partnerships to engage with. In fact, despite the central role of innovation in energy transitions and the potential of international collaboration, there is limited information available on the full landscape of multilateral initiatives and how they interact.

Examining a selection of collaborative partnerships reveals that numerous initiatives focus on the same technology areas. Our own examination shows that in eight technology areas, at least three of the four selected partnerships have active initiatives: heating and cooling; carbon capture, utilisation and storage (CCUS); nuclear; bioenergy and biofuels; wind; solar; smart grids; and hydrogen. The overlap becomes even more apparent when including other global, regional and thematic partnerships: for example, Technology Collaborations, MI, EU-ETIPs, the Biofuture Platform and the Global Bioenergy Partnership all focus on bioenergy. More generally, recent trends suggest that partnerships are increasingly centring on low-carbon energy sources and cross-cutting themes including systems integration. 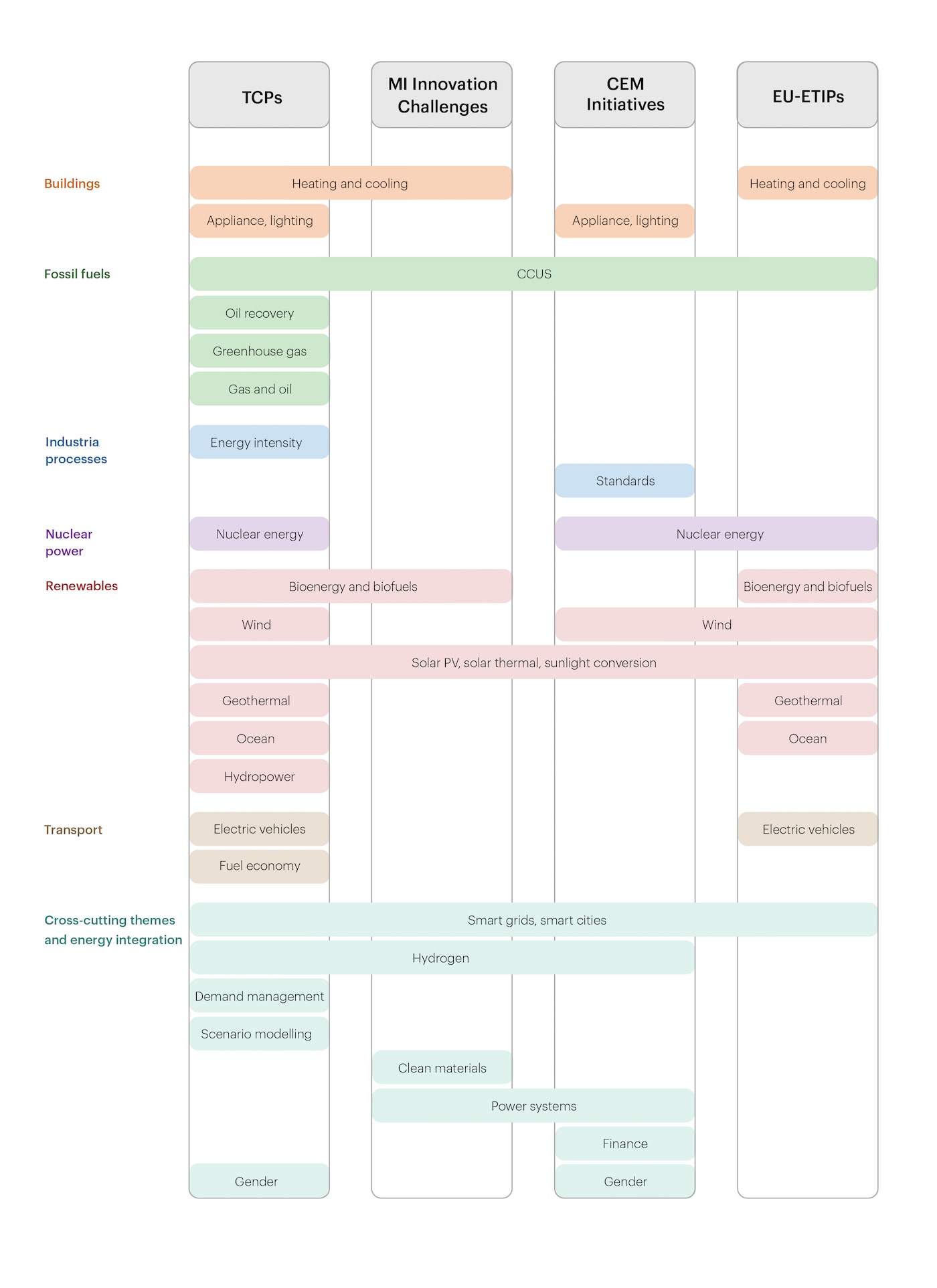 In eight technology areas, at least three of the four selected partnerships conduct collaborative activities. Decision makers may focus on these areas to pursue further synergies across partnerships.

Focusing on the same technologies across different partnerships may induce risks of duplication, thereby diluting policy maker attention and creating fundraising or political support challenges. That said, in some instances, activities may well address different aspects of the same technology area, justifying the overlap. Yet even in those cases, stakeholders have acknowledged that the perception of duplication may be enough to trigger a degree of competition between multilateral efforts. Policy makers would therefore benefit from identifying possible synergies between mechanisms to avoid replication of efforts while at the same time maximising complementarity.

Enhanced cross-mechanism collaboration may increase the impact of ongoing activities. For instance, co-locating stakeholder dialogue, events and roundtables may mobilise more actors and bring varied and valuable perspectives, attract attention from policy makers and enhance networking opportunities. Co-branding technology policy and market analyses may reveal new findings thanks to the combined experience, knowledge and networks of the initiatives involved. Collaboration between early-stage activities executing RD&D and initiatives providing competitive funding or grant opportunities may facilitate the development of energy technologies and their demonstration in real-life conditions or in strategic markets.

However, innovation stakeholders have also reported challenges in engaging with other collaborative mechanisms, in part because of a lack of systematic co-ordination processes. As a result, the number of interactions between existing partnerships, whether at the political or working level, remains low relative to the number of ongoing activities.

Despite these challenges, there are some initiatives that are already effectively collaborating across partnerships. For example, last year the co-leads of collaborative activities on smart grids under the International Smart Grid Action Network (ISGAN) (both a TCP and a CEM Initiative), identified a strategic opportunity to work more closely with the relevant Innovation Challenge under MI and formalised this co-operation.

Participation in collaborative partnerships continues to grow and diversify every year. IEA Members and Association countries currently account for the broadest participation in Technology Collaborations, CEM and MI, as illustrated by the “core” group of top-collaborators mentioned above.

While a strong central core of support is invaluable, an important trend for global innovation ecosystems is the increasing participation of emerging economies, such as China (currently a member of 23 Technology Collaborations), India (11), Mexico (10), South Africa (8) and Brazil (5).

Emerging market countries also tend to participate in regional partnerships, which allow governments that are not necessarily members of global efforts to benefit from international co-operation. The transition from regional to global collaboration is an encouraging trend for key emerging market countries, with which the IEA seeks to deepen engagement as part of the Clean Energy Transitions Programme (CETP).

While there is substantial interest from collaborative partnerships to deepen engagement with private-sector actors, this engagement is, at least for now, relatively uncommon. Among the four partnerships analysed in the report, only EU-ETIPs are co-led by industry stakeholders while some 80% of participants in Technology Collaborations are public bodies. For now, membership in MI and CEM is restricted to national governments, although engagement of private sector is actively sought and governments may designate in-country private sector experts to represent national interests in certain initiatives.

Different factors may be preventing companies from seeking engagement with government-led multilateral initiatives, including a lack of awareness of such programmes, differing working cultures between public and private actors, diverging priorities and little incentive to share information, and burdensome administrative procedures. On the other side, some stakeholders within collaborative partnerships remain reluctant to engage with industry, fearing the influence of corporate interests on their strategic decisions, work programmes or outputs. These reasonable concerns need to be overcome for effective public-private co-operation to take place.

Thankfully, we are seeing some positive developments. For instance, over 100 private-sector companies are now participating in the technical work of CEM activities, resulting from both CEM stakeholders reaching out to companies, and vice versa. In collaboration with the IEA, CEM also leads an Investment and Finance Initiative (CEM-IF) to help policy makers mobilise investments and financing, particularly from private sources, for clean energy deployment. Policy makers, collaborative partnerships and energy innovation stakeholders may benefit from further research on private-sector participation, building on these encouraging cases, to find ways to best leverage corporate capabilities.