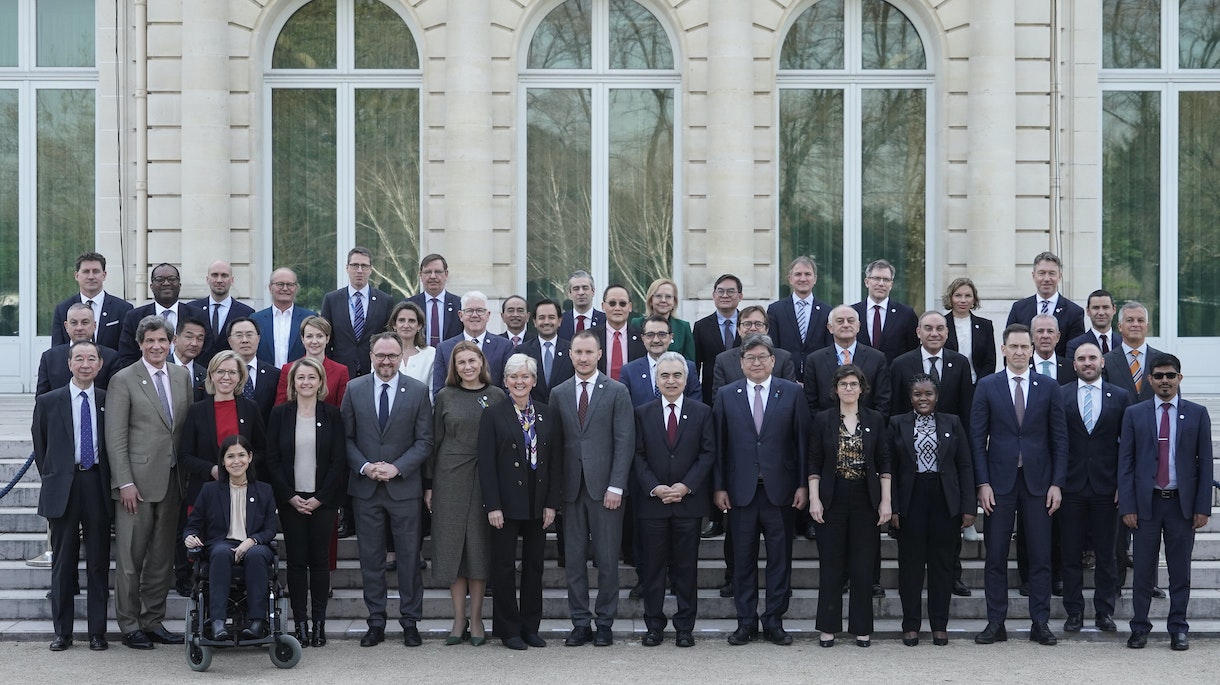 Chaired by US Secretary of Energy Jennifer M. Granholm, the two-day meeting of energy and climate ministers representing more than 40 governments from around the world took place amid the severe energy market turmoil and energy security concerns triggered by Russia’s unjust and unprompted invasion of Ukraine last month. Yaroslav Demchenkov, Ukraine’s Deputy Minister of Energy for European Integration, attended the meeting in person as a special guest, and Ukrainian Minister of Energy Herman Halushchenko participated virtually in one of the plenary sessions.

The major gathering of energy decision makers took place just a few months after the COP26 Climate Change Conference in Glasgow, where governments from around the world raised their ambitions for reducing greenhouse gas emissions.

Ministers from the IEA’s 31 Member Countries said the Ministerial Meeting marks “the launch of a new phase of the Agency”, with a series of new mandates setting out its mission going forwards. “In addition to ensuring global energy security, the IEA has a new guiding principle: supporting countries in the global effort to attain net zero greenhouse gas emissions in the energy sector by mid-century,” they said in a joint communiqué. Achieving net zero emissions by mid-century would give the world an even chance of limiting the rise in global temperatures to 1.5 °C, which is a critical threshold for avoiding the worst effects of climate change.

The new IEA mandates cover areas such as ensuring energy security during the energy transition and leading the global energy sector’s fight against climate change, with a notable emphasis on expanding the IEA’s work on the critical minerals needed for clean energy technologies.

“Today, IEA Member Countries and the European Commission banded together on actions to support Ukraine, stabilize the global energy market, and ultimately end our reliance on nations that weaponize fossil energy,” Secretary Granholm. “The urgent need to accelerate the equitable transition to clean energy remains a top priority, and must be accelerated. I’m honored to work alongside this collection of the world’s incredibly talented energy leaders. We are committed to a clean energy future that will create millions of good paying jobs, mitigate the destructive impacts climate change, and ensure a peaceful energy future.”

“The energy world is changing fast and needs to change faster still,” said IEA Executive Director Fatih Birol. “The IEA is ready to support the twin goals of energy security and the clean energy transition, and I’m delighted that our Member Countries, under the leadership of Secretary Granholm, are giving us the responsibilities and the resources to tackle the major challenges of our time. The IEA was founded nearly 50 years ago during the oil crisis of the 1970s, and this Ministerial Meeting is setting us up to help lead the response to the energy and climate crises we face today.”

The IEA also received a significant funding boost from governments to enable it to significantly scale up its work supporting the transition to clean energy in emerging economies.

Over the two days, ministers, business leaders, investors, civil society representatives and others discussed a range of crucial energy topics.

A special event was dedicated to how to better adapt policy, regulatory and legislative frameworks to accelerate deployment of the clean energy and low emissions technologies crucial to meeting international climate goals.

“Along with securing supplies of gas and oil, low emissions technologies are essential to long-term energy security and are the cornerstone of practical emissions reduction strategies,” said Angus Taylor, Australia’s Minister for Industry, Energy and Emissions Reduction who was one of the Ministerial Meeting’s three Vice-Chairs. “An acceleration in the deployment of low emissions technology will only be achieved by driving the costs of these technologies down.”

Ministers also underscored the importance of ensuring that clean energy transition policies are people-centred and take into account issues of fairness and inclusion, noting the need to sustain clean energy jobs and equitable opportunities.

“We have to create an accelerated clean energy transition – and it has to happen with the people at the center to ensure sustainable green job growth,” said Dan Jørgensen, Denmark’s Minister for Climate, Energy and Utilities, who was also a Ministerial Vice-Chair. “Coming to Paris for the IEA Ministerial has reassured me that the political determination and the industrial and technological expertise is in place. Now we just have to act.”

Participants at the Ministerial also paid particular attention to the challenges and opportunities facing Africa as the world increasingly shifts towards clean energy – and how international cooperation can support African countries in reaching their energy and climate goals.

“The global transition to renewable energy puts Africa in the center,” said Tinne Van der Straeten, Belgium’s Minister of Energy and a Vice-Chair of the Ministerial. “The African continent has vast potential for wind and solar technologies, allowing for the development of onshore and offshore wind farms, large scale solar parks and green hydrogen facilities. It is an opportunity for the entire continent while also supporting other countries’ transition objectives.”

In response to Executive Director Birol’s call for the IEA to be able to make its energy data freely available, the ministers requested a review of options that will enable this while offsetting the impacts on the Agency’s budget. The bulk of the IEA’s current data sales come from private companies and consultancies using it for commercial purposes. The revenue generated from these sales represents around 25% of the IEA’s core budget, reducing the need to call on member countries for additional funding.

Chaired by US Energy Secretary, meeting of ministers from around the world sends strong message of unity in response to energy security and climate crises