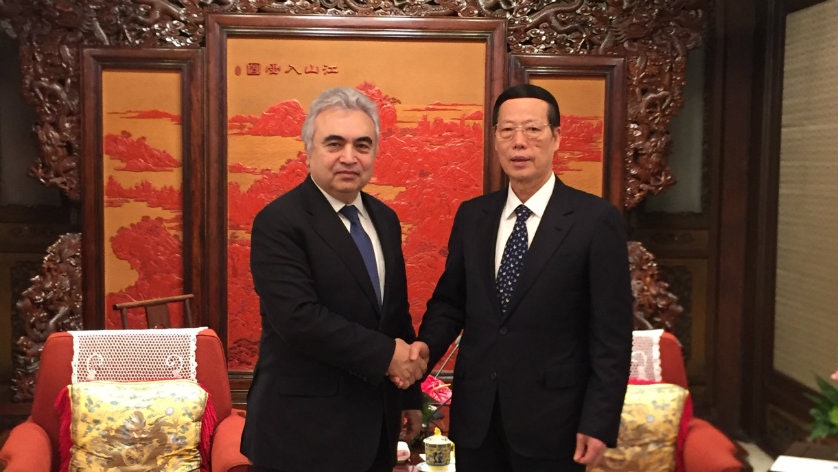 BEIJING – Dr Fatih Birol, the International Energy Agency’s executive director, met with Mr. Zhang Gaoli, Vice Premier of the People's Republic of China, to discuss the IEA’s commitment to deepening its cooperation with China during the country’s economic and energy transition.

During the bilateral meeting, Dr Birol emphasized the IEA’s ongoing modernization agenda, including “open doors” policy to the emerging economies. As part of this initiative, China joined the IEA in as an Association Country in 2015, allowing for greater cooperation on a variety of energy-related issues.

Mr Zhang has been China’sfirst-ranked Vice Premier since 2013, with a portfolio covering finance, economic development, natural resources, the environment and housing. He was accompanied by Ding Xiang Yang, the head of State Council Office (minister level); Lin Nian Xiu, Deputy Chairman of NDRC; Qin Gang, Deputy Minister at the Ministry of Foreign Affairs; and Li Fanrong, Deputy Administrator of the NEA.

Thanks to the IEA’s new “open-doors” policy, the IEA family, which includes Member Countries as well as seven Association Countries (Brazil, China, India, Indonesia, Morocco, Singapore, and Thailand), now accounts for more than 70% of global energy demand, up from about 40% in 2015.

Dr Birol was visiting Beijing to release the Chinese translation of the World Energy Outlook 2017 special focus on China. The presentation was made to a large audience of Chinese high-level government officials, representatives from industries, diplomats, academics and members of the media.

During his stay in Beijing, he also met with Mr. Wan Gang, the Minister of Sciences and Technology, and discussed clean-energy technologies, including EVs and CCUS; and Mr. Xie Zhenhua, China’s Special Envoy for climate change, to discuss ways to integrate China’s Emissions Trading System with its energy policies, and to enhance cooperation on energy-efficiency policies.