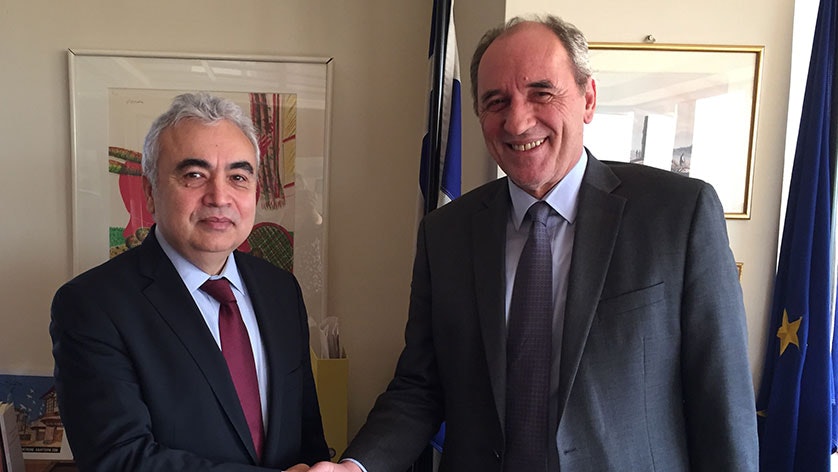 ATHENS – Greece has made noticeable progress with its energy-sector reforms in recent years. The country moved forward on plans to restructure state-owned companies and liberalize electricity and gas markets, an impressive programme that will lead to more competitive and financially viable energy markets offering choices and low prices to consumers, according to the International Energy Agency’s latest in-depth review of Greece’s energy policies.

The IEA report, Energy Policies of IEA Countries: Greece 2017 Review, encourages the country to pursue energy sector reforms that will provide long-term economic benefits. The report notes the important role that the country’s energy regulatory authority played in ensuring timely implementation of market reforms, and stresses the need to provide the regulator with all the necessary resources to meet its growing responsibilities.

Prior to the launch of the report, IEA Executive Director Dr Fatih Birol held a bilateral with Greek Energy and Environment Minister George Stathakis in Athens to discuss the IEA's policy recommendations as well as recent developments in global energy markets and the IEA’s upcoming 2017 Ministerial Meeting.

The IEA report also welcomes the government's efforts to strengthen energy security through investments in natural gas and electricity infrastructure, most notably by enhancing regional inter-connections, extending gas storage and promoting international gas pipelines to diversify supply routes. However, the government should allow gas and electricity markets to promptly react to price signals and assess supply adequacy in an integrated and regional manner, according to the IEA review, the first since 2011.

The country is expected to achieve its 2020 emission reduction and energy efficiency targets through a combination of targeted policy measures for renewable energy and energy efficiency, and the substantially lower energy demand as a result of the economic crises. Last year, Greece had more solar, notably solar heating, in total final consumption than any other IEA member country. Greece should also explore its renewable energy potential beyond solar and wind, and advance their usage beyond the electricity sector.

Greece’s economy is decoupling economic growth from increases in CO2 emissions but at a slower rate than the average for IEA member countries. The same is also true for the improvements in energy intensity. The drop in energy use because of lower economic activity hides minimal improvements in energy intensity since 2000, according to the IEA review. The report recommends that Greece pursues the implementation of ambitious energy efficiency policies, learning from the outcomes of past and current measures, also in other IEA countries.

The report also found that current policies will not be adequate to guide the Greek energy sector towards the long-term energy transition that the government is aiming for. The country’s economic recovery should be used as an opportunity for Greece to get a head start on longer-term emission reductions by pursuing initiatives that support sustainable increases in efficiency, and a switch from oil and coal to natural gas and renewable energy.

“The IEA believes that a key priority for policy makers should be to introduce a comprehensive policy framework to 2030 and beyond, as a pick-up in economic growth could easily lead to a rebound of energy demand growth and increase in emissions,” Dr Birol said.

Greece currently lacks a longer term integrated energy and climate strategy and the report recommends the Government to develop such a strategy and to specifically take into considerations ambitions for energy efficiency and renewable energy.