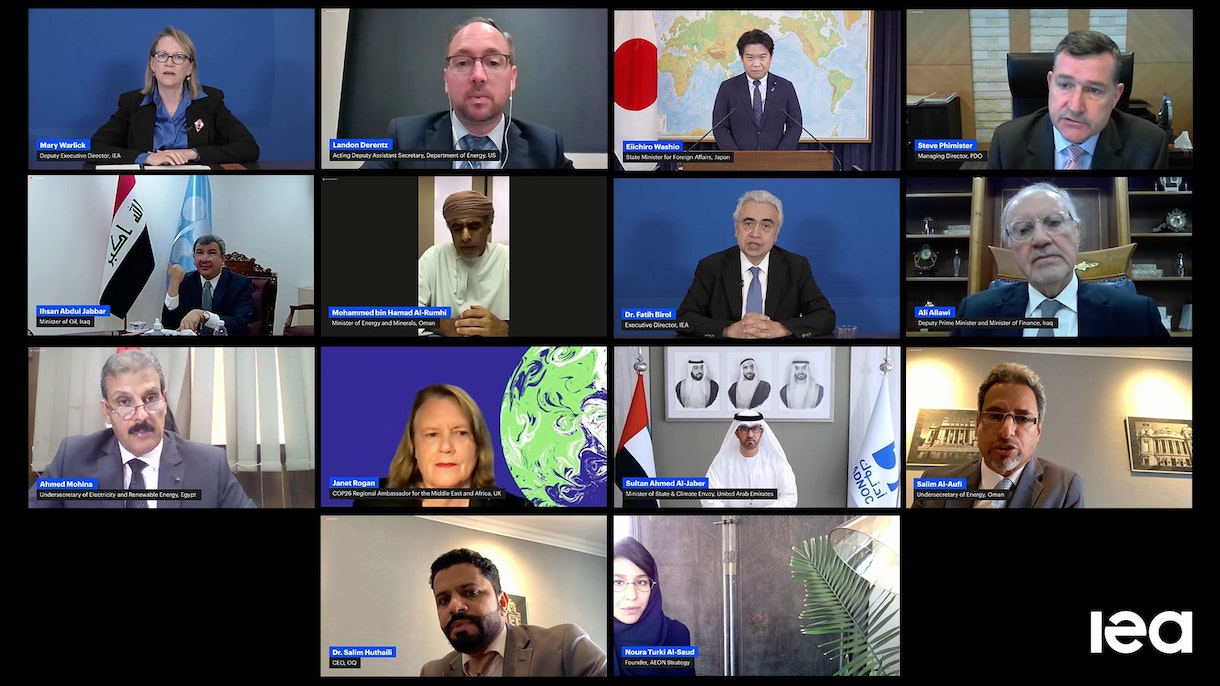 Ministers from across the Middle East and North Africa recently took part in a high-level dialogue hosted by the IEA and the Ministry of Energy and Minerals of Oman to share ideas on the roles clean energy could play in their economic future.

At the meeting on 9 September, Ministers discussed options for decarbonising local energy supply and presented their current and future plans to increase renewable electricity capacity and energy efficiency. They also outlined their work to reduce the greenhouse gas intensity of their oil and gas industries through initiatives to reduce gas flaring, mitigate methane leakage and implement carbon capture and utilisation. There was also a discussion about the potential for future low-carbon exports, including in the rapidly expanding low-carbon hydrogen industry.

The Ministerial Dialogue, which took place via video link and was livestreamed in its entirety, was attended by Ministers and senior representatives from Algeria, Egypt, Iraq, Kuwait and the United Arab Emirates, as well as from Japan, the UK COP26 Presidency and the United States.

The event served as a platform to share experiences between countries that are acutely affected not only by the direct impacts of global warming, but whose economies have a strong reliance on energy production and are uniquely vulnerable to the transition away from fossil fuels and towards cleaner energy sources.

Demand for the region’s oil and gas exports is expected to continue for many years to come. But participants in the Ministerial Dialogue noted that energy transitions linked to the world’s strengthening efforts to follow through on climate pledges will eventually entail a reduction in export revenues from fossil fuels. They also recognised that the Middle East and North Africa region needs a clear voice in the global climate change discussion in the run-up to COP26 in Glasgow in November.

“Covid-19 gave us a glimpse of what could happen when there’s a collapse in demand for oil,” said Iraq’s Deputy Prime Minister Ali Allawi, adding that his country’s economy had faced a “near-death experience” that necessitated immediate changes. He said producer economies had to adapt to new market dynamics associated with energy transitions, warning that inaction could lead to dramatic levels of damage in a region that is already facing serious climate, security and socioeconomic challenges.

Ministers highlighted the opportunities available for countries across the Middle East and North Africa to make energy transitions a key component of their broader economic plans, with Minister Sultan Al-Jaber of the United Arab Emirates telling the group that the “region has the resources, the experience and the vision to unlock huge economic potential from the transition to a lower carbon economy.”

"We need to work together to share knowledge and opinions to achieve our goals,” Omani Energy Minister Mohammed Al-Rumhi told participants.

IEA Executive Director Fatih Birol, who co-hosted the event with Minister Al-Rumhi, conveyed his hopes that the “atmosphere of cooperation and dialogue will result in the necessary steps being taken at Glasgow”. He stressed that the IEA stands ready to help countries across the Middle East and North Africa with technical support to accelerate their clean energy transitions.

At high-level meeting hosted by IEA and Oman, Ministers from across region discuss ways to decarbonise local energy supplies and exports