Armenia’s electricity production is heavily reliant on fuel imports and a continued emphasis on energy efficiency and solar deployment would help diversify the country’s energy supply, though further infrastructure investments may be needed to integrate the large planned increase in variable renewable sources, according to a new policy review by the International Energy Agency.

While Armenia has a diverse generation mix of gas-fired thermal, hydropower and nuclear, Russia supplies all of its nuclear fuel, and the bulk of its gas, along with some volumes from Iran. As a result, 70% of Armenia’s electricity production is effectively reliant on fuel imports from the two countries.

Since the IEA’s last review in 2014/15, Armenia has developed an Energy Strategy, released in 2021, which calls for up to 1 000 MW of solar PV capacity to be installed by 2030, lifting the share of grid-connected solar to 15% of generation. Armenia is heavily promoting renewables not only to increase energy security, but also to meet greenhouse-gas reduction commitments.

Further emphasis on energy efficiency could also help improve energy security, according to the IEA. The policy review notes that Armenia still has considerable potential to increase efficiency, particularly in buildings such as the multi-apartment blocks where the majority of Armenians live. Efficiency in the buildings sector is covered in more detail in another recent publication by the IEA’s EU4Energy Programme, Energy Efficient Buildings in Armenia: A Roadmap (October 2020).

Around 85% of Armenia’s gas is currently supplied by pipelines from Russia passing through Georgia. The remainder is imported from Iran but through a pipeline network that is controlled by Armenia’s gas monopoly. The Iranian gas currently is used only to generate electricity that is re-exported to Iran as part of a gas-for-electricity swap.

The IEA survey points out that Armenia’s heavy reliance on a single source of natural gas is compounded by its substantial dependence on gas, which accounts for the largest share of the country’s total energy supply. For example, both the residential heating and road-transport sectors rely on natural gas as their main fuel. Armenia has no known oil production or reserves, nor any refineries.

The country is also aiming to enhance energy security by substantially increasing electricity interconnections with neighbouring Georgia and Iran.

Since the late 1990s, the EU and several other international partners have strongly encouraged Armenia to close its Soviet-era WWER-400 nuclear reactor, which typically supplies 30-40% of the country’s electricity. Armenia has improved nuclear safety measures in order to meeting International Atomic Energy Agency goals for existing nuclear power plants. The IEA advises the government to continue close coordination with the International Atomic Energy Agency, EU and other relevant international organisations on nuclear safety issues.

The IEA commends Armenia for avoiding energy subsidies and for its decisive steps to implement a liberalised electricity market, which was launched in February 2022. Exposing investors and consumers to the true costs of energy supply, accompanied by a safety net for the most vulnerable customers, helps ensure efficient energy investment and use. 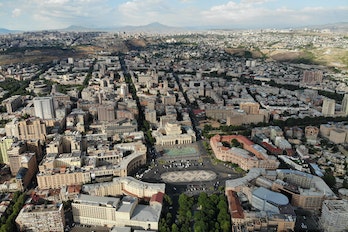