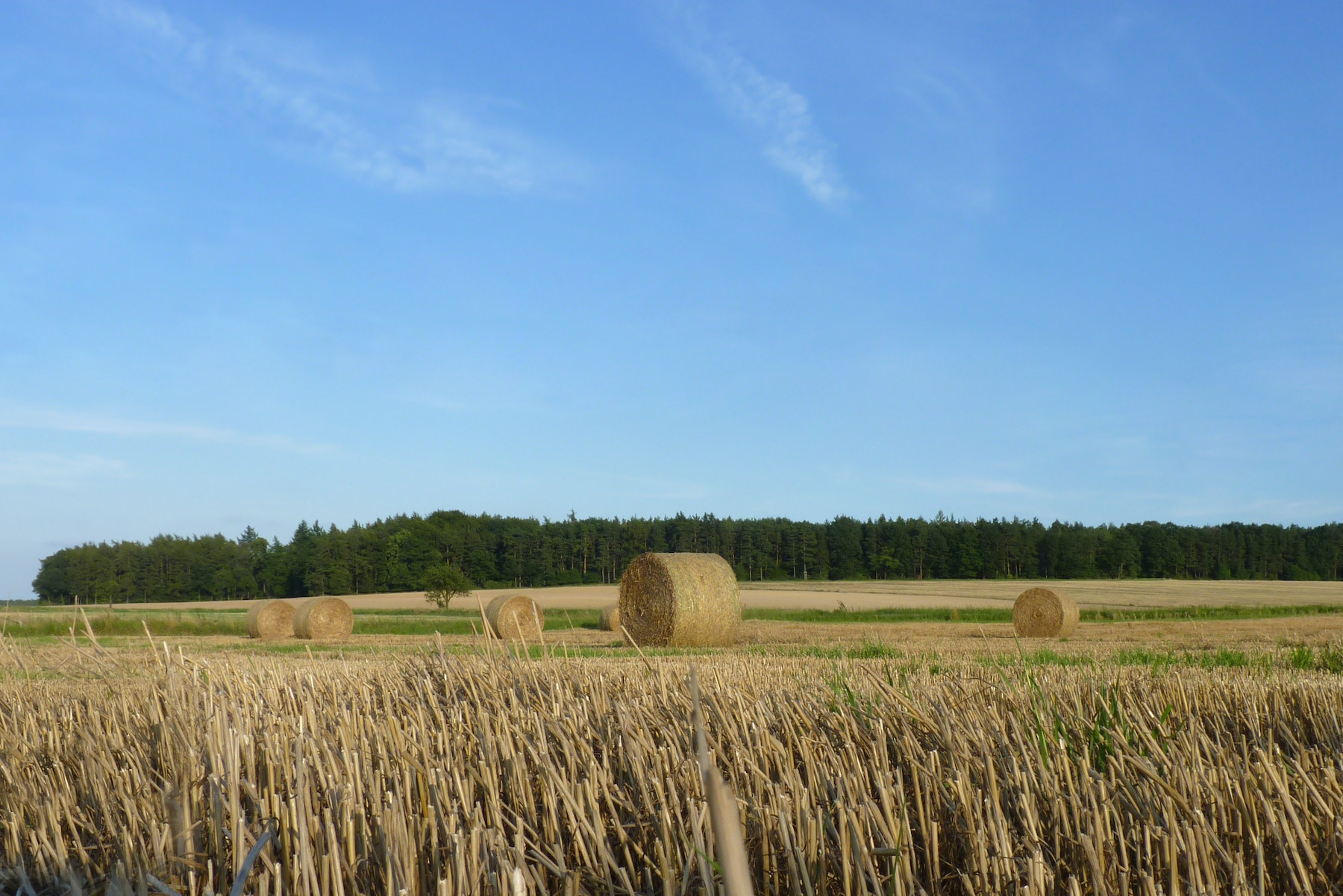 Bioenergy with carbon capture and storage (BECCS) involves any energy pathway where CO2 is captured from a biogenic source and permanently stored. Only around 2 Mt of biogenic CO2 are currently captured per year, mainly in bioethanol applications. Based on projects currently in the early and advanced stages of deployment, carbon removal via BECCS could reach ~40 Mt CO2/yr by 2030, which falls short of the circa 250 Mt/yr removed through BECCS by 2030 in the Net Zero Emissions by 2050 Scenario. The momentum behind BECCS has, however, grown substantially in recent years: plans for over 50 new facilities involving BECCS (totalling biogenic capture capacity of around 20 Mt CO2 per year) were announced between January 2021 and June 2022, across several BECCS applications, boosted by company- and country-level net zero commitments.

BECCS and direct air capture (DAC) with CO2 storage are technology-based solutions for carbon dioxide removal (CDR), required to meet net zero ambitions. BECCS is the only CDR technique that can also provide energy. Biogenic sources used for BECCS can be process emissions resulting from biofuel and biohydrogen production, or combustion emissions from heat and power generation in power plants, waste-to-energy plants and industrial applications fired or co-fired by biomass (cement, pulp and paper) or using biochar as a reducing agent (steel). As an alternative to storage, the captured CO2 can also be utilised as a feedstock for a range of products. While some carbon capture and utilisation routes can bring important climate benefits, CO2 removal can only be achieved through permanent storage.

Just over 2 Mt CO2 per year are currently captured from biogenic sources, with around 1 Mt CO2 stored in dedicated storage. Over 90% is captured in bioethanol facilities, one of the lowest-cost BECCS applications due to the high concentration of CO2 in the process gas stream. The largest operating BECCS project to date is the Illinois Industrial CCS Project, which has been capturing 1 Mt CO2 per year for permanent storage in a deep geological formation since 2018. The Red Trail Energy bioethanol project also recently came online in North Dakota. Other small-scale bioethanol facilities are capturing CO2 in Europe and the United States, but these either sell the CO2 to greenhouses for yield boosting or use it for enhanced oil recovery.

Despite increasing awareness around the importance of BECCS to reach net zero, deployment remains low

Around 40 bioethanol facilities (including around 30 as part of the Midwest Carbon Express project in the United States) are planned to start capturing CO2 before 2030, totalling over 15 Mt of biogenic CO2 capture capacity. Project announcements in the past two years suggest that the BECCS project pipeline is diversifying, with proportionally more capture projects being announced in heat and power, hydrogen and cement:

While encouraging, plans for BECCS deployment remain insufficient across all sectors to get on track with the Net Zero Scenario. By 2030 around 60 Mt/yr should be captured in the power sector, 170 Mt/yr in the fuel transformation sector and 20 Mt/yr in industry, mainly cement.

Bioethanol is the leading BECCS application, but more projects in power and industry are expected to come online

CO2 capture from first-generation bioethanol production is the most mature BECCS route, operations dating back to the late 2000s in the United States. CO2 capture at biomass combustion plants has been at the commercial demonstration stage since January 2020 with the operation of the Mikawa power station in Japan, but large-scale gasification of biomass for synthetic gas applications is still at the large prototype stage. In industry, biomass co-firing in kilns is already commercial, pulp and paper mills firing up to 100% biomass and cement plants firing up to 40%. The co-firing of torrefied biomass in steel blast furnaces, especially in Brazil, is also commercial. However CO2 capture from kilns and blast furnace off-gas is still at the prototype or demonstration stage.

Some BECCS routes are commercial, but the most critical are still at the demonstration or pilot stage 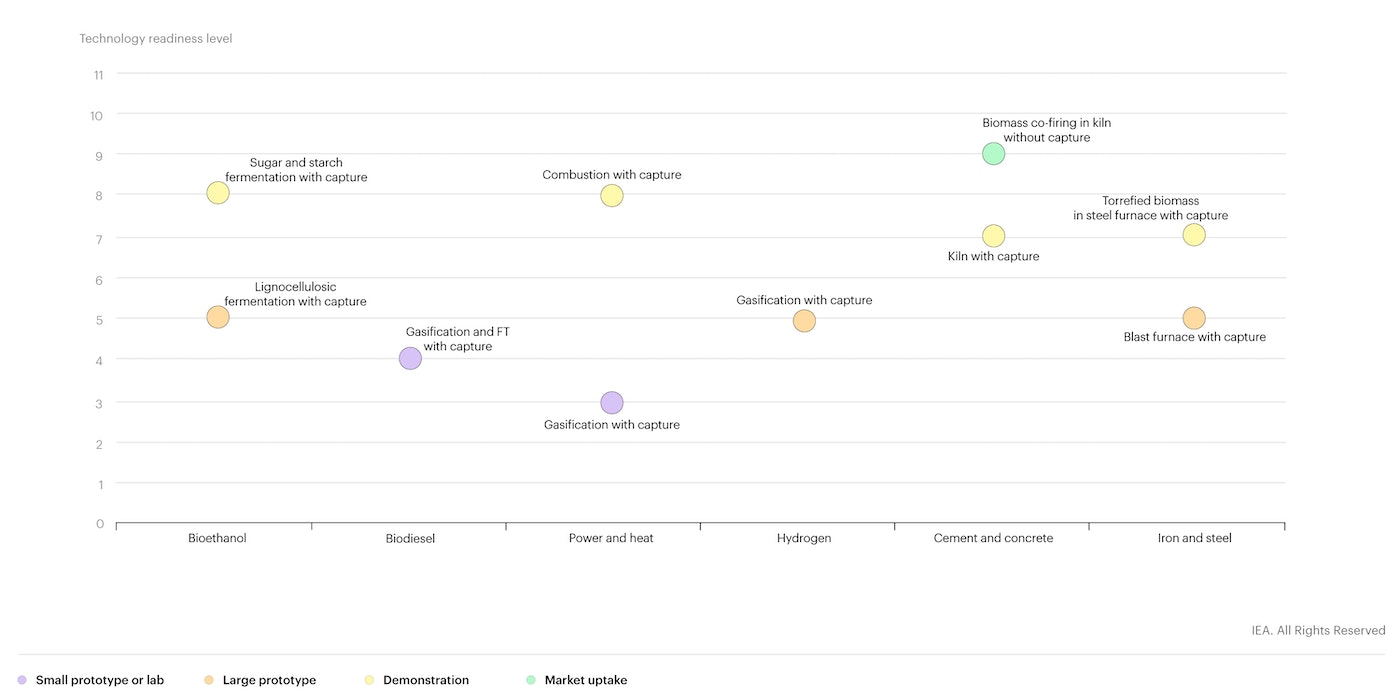 Chemical absorption is the state-of-the-art capture method, but other capture technologies with a lower energy requirement are at various stages of development (see main CCUS page for a list of innovations). UK power company Drax is currently piloting three capture technologies, including a solid-adsorption capture pilot using metal organic frameworks in the North Yorkshire incubation hub since March 2022. Work to demonstrate large-scale biomass gasification for synthesis gas applications is also under way, seeking to reduce capital costs and increase feedstock flexibility. Projects include one on woody biomass for biomethane production in Sweden, and one on waste in the United Kingdom.

Retrofitting existing bioenergy facilities with carbon capture and storage could provide substantial carbon removal while limiting impacts on resources. Owing to the relatively low volumetric energy density of biomass (and resulting high transport costs), biomass-fuelled plants tend to be smaller scale than fossil-fuelled plants in order to be closer to local fuel supplies. The average size of biomass power plants operating in 2021 was around 10 MW, against around 230 MW for coal. This means that existing biomass facilities are likely to benefit less from economies of scale to support investment in CO2 infrastructure. Focusing on biomass facilities within industrial clusters can help leverage economies of scale and aggregation. In the United States, the Midwest Carbon Express project plans to connect 32 bioethanol plants with a ~4 000 km pipeline network across five states.

Retrofitting larger coal plants to accept biomass or building new biomass facilities are other options. However, producing, transporting and pretreating sufficient sustainable biomass while limiting negative impacts is central, particularly considering the BECCS CO2–energy balance, the ecosystem (e.g. land use change, the natural carbon cycle and biodiversity) and the fuel–food and fibre production balance. The composition of the biomass feedstock can affect the performance of the retrofitted plants, so ensuring the quality of the biomass feedstock is central. In a pulverised biomass combustion plant, high-quality dried ground biomass is typically required before combustion, which often means having to source biomass from further away and adding pretreatment steps. For example, over 80% of the feedstock used in the UK Drax plant are wood products imported from North America, and all of the Mikawa plant feedstocks are palm kern shells from Indonesia, both plants being coal retrofits. Gasification can accept a wider range of feedstock quality, which means nearby agricultural residues and wastes can be used.

Steps in the BECCS value chain (e.g. biomass supply, feedstock preprocessing, bioenergy plant, CO2 storage) are rarely co-located, which means additional and distinct infrastructure to connect them is required. Successful deployment of BECCS at scale would require the coordinated development of each component of the supply chain, including biomass supply and CO2 transport and storage. Opportunities that maximise the removal and mitigation potential of BECCS while limiting its economic, environmental and social costs can be identified through the mapping and matching of sustainable biomass supply, existing bioenergy facilities, industrial clusters and potential CO2 storage sites.

While investment in low-cost BECCS applications such as bioethanol is gaining momentum, a suite of policies is required to address barriers in power and industrial BECCS applications, including high upfront investment needs, long payback periods, uncertain carbon markets (carbon price), the sustainability of biomass supply and access to CO2 transport and storage infrastructure.

In the European Union, carbon removal is not credited under the EU Emissions Trading System. However, the first Communication on Sustainable Carbon Cycles, released by the Commission in December 2021, suggests that 5 Mt of CO2 should be removed annually by 2030 from the atmosphere and permanently stored through land- and technology-based approaches such as BECCS. In January 2021 the Swedish government tasked the Swedish Energy Agency with designing a support scheme for BECCS, to be implemented in 2023 as a reverse auction.

In the United Kingdom, the Net Zero Strategy released in October 2021 sets out a 5 Mt CO2 per year target for engineered carbon removal via BECCS and DACS by 2030, with the aim of achieving 80 Mt by 2050. A public consultation on business models for removals was also launched in July 2022, with a focus on first-of-a-kind BECCS power plants.

In the United States, the 2018 Farm Bill established a variety of new programmes to aid the development and deployment of a wide range of CDR carbon dioxide removal methods. The Energy Act of 2020, a bipartisan renewable energy bill passed at the end of 2020, contains several provisions to promote CDR. The 45Q tax credit which was recently expanded and extended through the Inflation Reduction Act, supports BECCS by providing a USD 60 tax credit per tonne of CO2 used and USD 85 per tonne of CO2 stored.

BECCS can benefit from funding for both low-carbon energy and CDR. Since January 2020 over USD 40 billion has been invested in CCUS, including over USD 5 billion in policies and projects specific to CDR or BECCS.

Funding is increasingly targeting the R&D and demonstration of specific CDR technologies:

Investment in BECCS is growing across applications

In recent years, voluntary carbon markets have provided significant support for CDR projects. Voluntary carbon credits offer large geographical and sectoral flexibility where they are implemented. However, due to a lack of certainty around demand for and the price of negative emissions, these markets alone are not likely to offer sufficient support to scale BECCS deployment consistent with the Net Zero Scenario. Caveats around voluntary carbon markets also relate to the quality of offered removals, specifically with regard to their additionality, permanence and leakage risks.

In contrast, contracts-for-difference (CfDs) provide a high level of certainty for BECCS deployment. Particularly in the power sector, CfDs could benefit BECCS power plants by reducing the financial risk due to their high generation costs, and providing financial support if the strike price is set significantly above average prices. For industrial BECCS, conventional CfDs might need to be modified; for example, they could be linked to the price of carbon under an emissions trading scheme.