Since the launch of the Clean Energy Transitions Programme (CETP) in late 2017, the IEA has significantly expanded its work to help accelerate energy transitions in major emerging economies. The CETP is playing a critical role in supporting clean energy transitions, putting sustainable development at the heart of economic recovery measures and further strengthening the IEA family.

The CETP Annual Report 2020 highlights the programme’s main activities, presenting major outcomes and areas for further work as well as planned activities for 2021. It also summarises IEA activities related to clean energy transitions at a global level, and introduces new and innovative analyses and resources produced throughout the year.
The report initially provides an overview of the CETP’s objectives, then presents highlights of activities and achievements for each priority country (Brazil, the People’s Republic of China. India, Indonesia, Mexico and South Africa), each priority region (Africa, Latin America and Southeast Asia), and globally.
This is an extract, full report available as PDF download
Download full report

2020 was a critical year for the prospects of clean energy transitions worldwide. Since the emergence of the Covid-19 pandemic and ensuing economic crisis, the IEA has led calls for governments to both achieve a sustainable, resilient recovery and address the looming climate crisis.

Throughout this challenging year, the Clean Energy Transitions Programme (CETP) played an important role in ensuring that the task of building a secure and sustainable energy future was strengthened. The programme’s activities were adapted to confront the disruption brought by the pandemic while furthering our goal of accelerating clean energy transitions when and where it matters most. Responding to calls from governments, the IEA produced detailed, cost-effective policy options to support sustainable recoveries, explored in detail the impacts of the pandemic on energy markets and systems, and set out near-term actions that could help accelerate clean energy transitions.

Relying on the independent, data-grounded approach and unique expertise of the IEA, the programme continues to be uniquely situated to provide targeted analysis and recommendations even as the crisis affects the energy sector. The IEA has done this through initiatives such as the Global Sustainable Recovery Plan and other efforts such as exploring ways to enhance private-sector investment in transmission in Southeast Asia; identifying ways to attract private power sector investment to fund sustainable recovery in Indonesia; engaging with partners to support clean energy transitions in North Africa; sustained and tailored co‑operation to support the design of the Chinese emissions trading scheme in the power sector; and working with India to identify energy efficiency stimulus measures in the country.

Crafting sustainable recovery packages with and for emerging economies presents a once-in-a-lifetime opportunity to help drive the shift towards a cleaner and more inclusive energy future. We can help create millions of jobs around the globe. We can help realise multiple climate, air pollution, health and climate resilience-related benefits.

Never has it been more important to collaborate with key emerging economies. In its three years of existence, the CETP has dramatically expanded the IEA’s work to support Brazil, the People’s Republic of China, India, Indonesia, Mexico and South Africa – economies that collectively account for close to 45% of CO2 emissions from fuel combustion and which represent over two-thirds of emissions from developing economies. The programme has also continuously expanded its regional-level work in Africa, Latin America and Southeast Asia – by developing partnerships with major institutions and playing an important convening role.

In July 2020 the IEA held its first Clean Energy Transitions Summit, a major initiative to bridge the gap between climate goals and energy realities. Ministers from countries representing over 80% of the world economy gathered around a virtual table with key actors from the private sector and civil society to build an ambitious, real-world “grand coalition” committed to tackling climate change. The discussion included the ministers of the six key emerging economies targeted under the CETP and from countries in targeted regions. Several ministers at the summit thanked the IEA for its CETP assistance; others signalled their plans to increase their support for the programme; and, overall, participants welcomed the success of the IEA’s CETP in building trust and providing actionable advice to the world’s largest emerging economies on their most consequential clean energy transition challenges. On 31 March we jointly hosted with the UK government the IEA–COP26 Net Zero Summit. This summit focused on the implementation actions necessary to start converting the growing number of net-zero goals into reality (and also informed the preparation of the upcoming IEA Special Report: The World’s Roadmap to Net Zero by 2050).

We will also look forward to deepening and expanding the CETP’s impact in the decisive months and years to come. My most sincere thanks go to the United Kingdom, Denmark, Italy, Japan, Sweden, the European Commission, The Netherlands, the Agence Française de Développement (AFD), Germany, Switzerland, Canada, Finland, New Zealand and Australia for their essential support and continued involvement. Our shared ambition to turn collective aspirations into hard reality is at the heart of the programme.

Since 2015 the IEA has embarked on an ambitious transformation to become the leading voice in clean energy transitions, with the launch of the CETP being a critical milestone. The deep transformation of energy systems we need to achieve in the next decade is unprecedented in speed and scale. Achieving global net-zero emission goals would notably mean boosting investment in clean electricity by 2030 from USD 380 billion to USD 1.6 trillion by 2030.

With the CETP as a concrete illustration of our collective willingness and capacity to accelerate the pace of change toward the sustainable energy systems of the future, I remain more optimistic than ever about our prospects for success. The agency stands ready to continue supporting the IEA family under the CETP so that we deliver, together, a better energy future.

In closing, I would like to acknowledge former IEA Deputy Executive Director Dave Turk as the inspiration behind the creation of the CETP three years ago and for his tireless efforts ever since, which have made it what it is today. Dave has recently left the IEA to return to the United States to take on even bigger and brighter challenges. We will no longer be sharing adjoining offices, but our friendship will continue from afar and I am convinced his contribution to global clean energy transitions will go from strength to strength.

With the CETP as a concrete illustration of our collective willingness and capacity to accelerate the pace of change toward the sustainable energy systems of the future, I remain more optimistic than ever about our prospects for success. The agency stands ready to continue supporting the IEA family under the CETP so that we deliver, together, a better energy future.

During its first two years of existence (2018 and 2019), the CETP created a strong foundation of engagement, relationships and partnerships with major emerging economies. This groundwork meant the programme was in a position to adapt rapidly to the disruption and opportunities brought by the Covid-19 pandemic during 2020.

In 2020 we held 30 capacity-building events across the world. Adapting to the Covid-19 crisis, our mostly online events and material helped train over 2 600 participants, ensuring the programme kept a strong expertise-sharing component at its forefront, despite travel restrictions. We also tailored our activities and analysis to the pandemic by supporting targeted appraisals, investigations and international dialogue on the Covid-19 crisis

We ensured high-level buy-in to our work through 36 discussions with government ministers and high-level officials on major energy topics, held within the framework of the CETP. We worked to provide ad hoc support through 127 technical exchanges.

The virtual nature of some of these high-level events also broadened our audience and reinforced the impact of our messages on clean energy transitions. The digital livestream of the Clean Energy Transitions Summit held in July notably attracted over 2 million viewers worldwide. 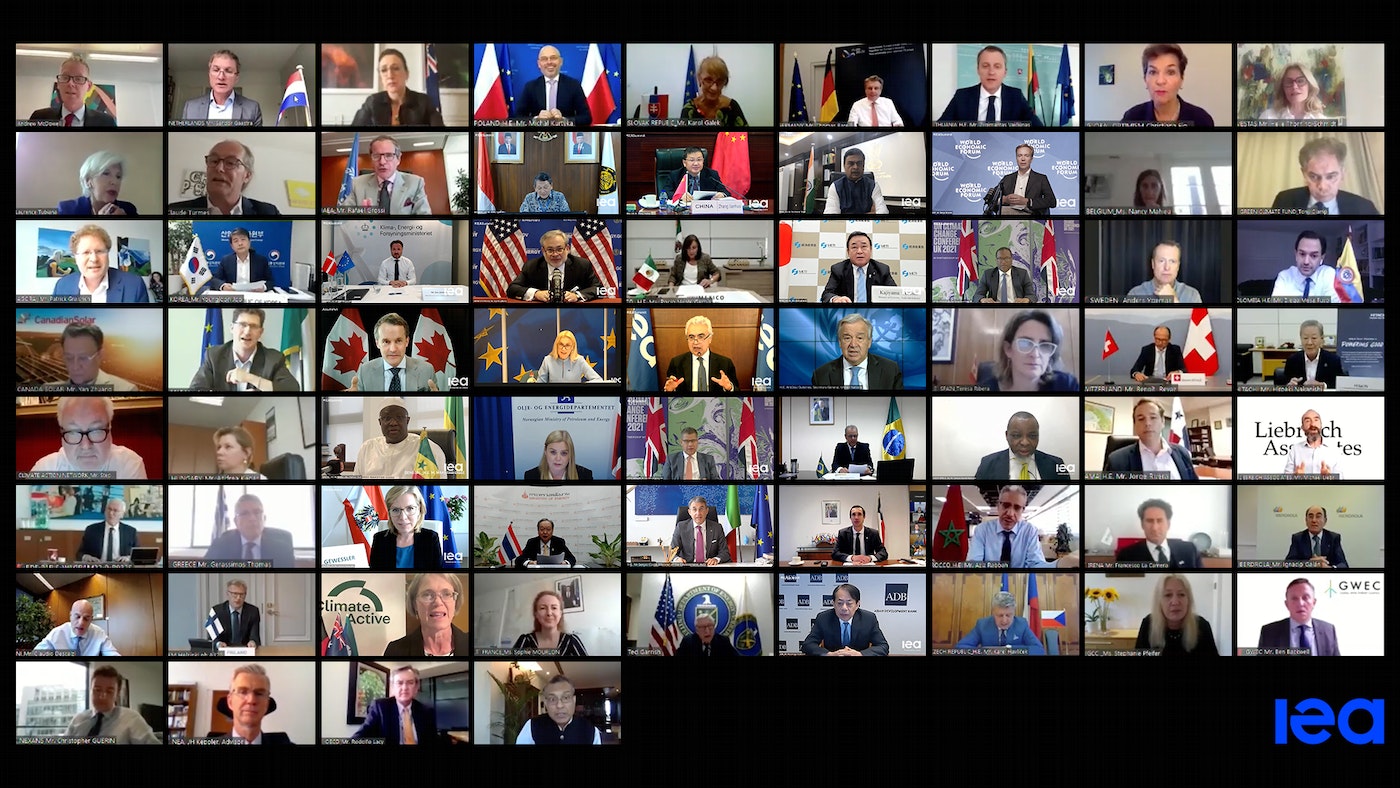 The CETP harnesses the IEA’s unique expertise, credibility and convening power to deepen and accelerate the implementation of clean energy transitions. The programme is designed to assist policy makers and other relevant stakeholders in their priority setting and implementation activity by combining skills: high-level strategy planning, expert-level co‑operation, technical capacity strengthening and international experience sharing. The programme is designed to translate evidence and experience of energy transitions into action by advancing co‑operation between countries and regions on data and analysis, policy design and implementation, capacity building, and technical and high-level engagement.

The CETP’s priority countries are Brazil, the People’s Republic of China (hereafter, “China”), India, Indonesia, Mexico and South Africa – economies that collectively accounted for 44% of CO2 emissions from fuel combustion in 2019. Our additional target regions are Africa, Latin America and Southeast Asia.

The CETP achieved many on-the-ground successes in each of its seven work streams in 2020 – data and statistics, energy efficiency, electricity, policy advice and modelling, sectoral work, innovation, and digitalisation – by continuing to build upon its four key pillars: high-level engagement and collaboration, joint learning and knowledge exchange, enhancing knowledge and evidence for policy making, and supporting solutions-oriented multilateral engagement.

Our activities with Brazil continued to expand; key highlights of our work included:

The IEA’s relationship with China went from strength to strength in 2020; top highlights included: 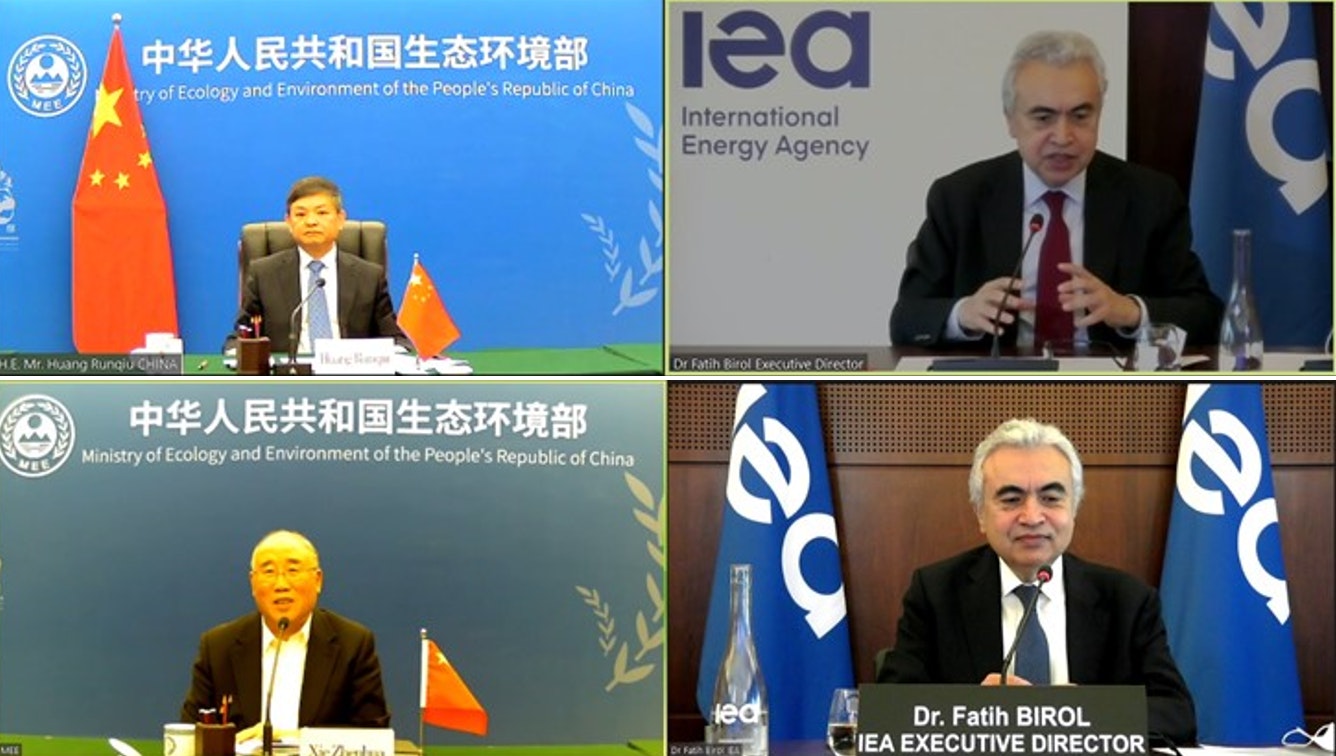 Engagement with India under the CETP was strengthened in 2020 across all work streams; top examples include: 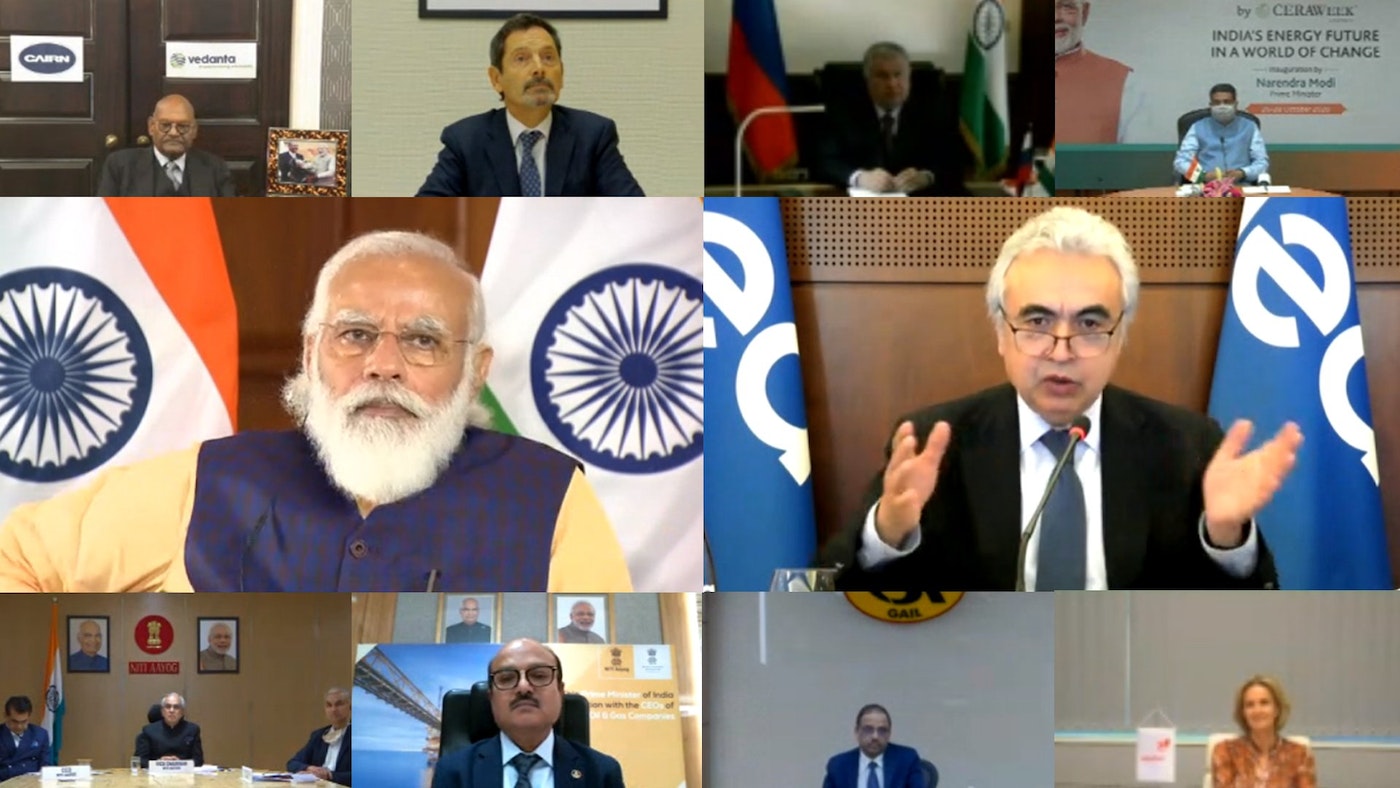 In 2020 the IEA’s work programme with Indonesia became one of our most dynamic, with Indonesia increasingly looking to the IEA as a central day-to-day partner on key policy priorities – with enormous potential to continue to expand impact in 2021. Highlights included:

The year was highly successful for the IEA’s engagement with Africa, including:

During 2020 our engagement with the region expanded through activities such as: 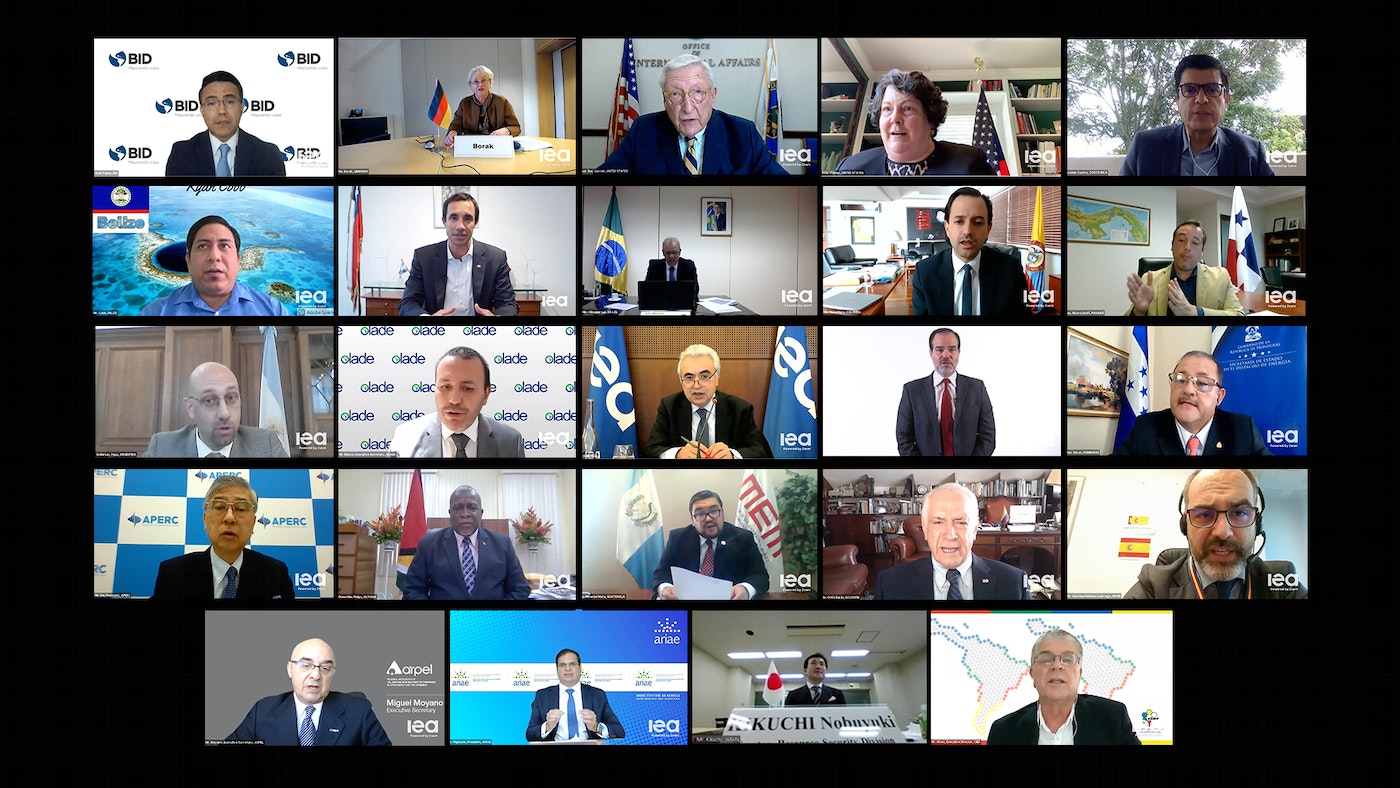 Highlights of our ever-expanding work with Southeast Asia in 2020 included:

The need for the CETP – and its prospects for further impact – has never been stronger. As the IEA further strengthens its role in leading global clean energy transitions, the CETP will enhance work to reduce investment gaps in emerging and developing economies, improve the prospects for job creation through clean energy transitions, and help ensure people-centred transitions. The IEA will further build upon its trusted relationships with major emerging economies to further promote implementation of sustainable recoveries.

The programme will also expand its influence and impact by enhancing collaboration with leading international financial institutions, economic ministries and other important partners. In March 2021 the IEA hosted – jointly with the UK government – the IEA-COP26 Net Zero Summit to take stock of the growing list of commitments to reach the goals of the Paris Agreement and focus on the implementing actions necessary to begin turning the growing number of net-zero goals into reality.