Energy efficiency trends are expected to return to their ten year average after the worst year in a decade. However, the rate of improvement needs to double from current levels to match the gain outlined in the IEA Net Zero Emissions by 2050 Scenario. In 2021, global energy intensity – a key measure of the economy’s energy efficiency – is expected to improve (that is, to fall) by 1.9% after improving by only 0.5% in 2020.

Global energy demand is expected to increase by about 4% in 2021, returning to pre-pandemic levels as economic activity rebounds. The previous year was one of the worst ever for efficiency improvement, as energy demand and prices fell, technical efficiency enhancements slowed and the balance of economic activity shifted away from less energy-intensive services, such as hospitality and tourism.

With disruptions due to Covid-19 shaping global energy and economic trends in 2020 and 2021, it is still unclear whether this year’s improved energy intensity will signal the start of a sustained recovery. However, increased investment trends, rising government spending on efficiency - in large part related to recovery plans enacted in response to Covid-19 crisis, new announcements of higher climate ambition and other policy measures offer some encouraging signals.

Government policies are expected to help energy efficiency investment rise by 10% in 2021 to almost USD 300 billion. However, to be consistent with levels foreseen in the IEA Net Zero Emissions by 2050 Scenario, overall annual investment would need to triple by 2030. Recent investment growth has been concentrated largely in Europe, suggesting polices are needed in other regions to achieve global climate goals.

Additional and stricter standards and regulations, higher public spending, incentive structures, and streamlined planning laws and procedures can all help lift investment and make efficiency projects more attractive to private finance. For example, the energy services market in the People’s Republic of China (hereafter “China”) increased its deployment of digital technologies and expanded by 12% in 2020, assisted by tax incentives.

Approved energy efficiency spending by governments is regionally unbalanced, with the majority of spending coming from advanced economies. There remains considerable potential for governments elsewhere to use recovery packages to boost spending, which would create jobs and promote economic growth.

Energy efficiency-related spending makes up around two-thirds of the total USD 400 billion a year mobilised by governments with their recovery measures over the next three years, as monitored by the Autumn 2021 update of the IEA Sustainable Recovery Tracker. This comprises both government spending and associated mobilised private and other public sector spending between 2021 and 2023. Measures that have been announced but yet to be confirmed of the end of October 2021, are not included and may lift efficiency spending even higher.

In the IEA Net Zero Emissions by 2050 Scenario, an early policy focus on energy efficiency would triple the number of jobs created by 2030 through increased spending on building retrofits, more efficient appliances and other measures. This includes many jobs in construction, as well as installation of heating, cooling and hot water systems. While many of these jobs match existing skill sets, governments can play a role by sponsoring training programmes to help provide wider access to opportunities and avoid skills shortages.

The economic recovery in 2021 has increased demand for commodities, putting pressure on supply chains, and creating shortages and bottlenecks for goods and services essential for energy efficiency investment. This has pushed up prices for everything from basic construction materials to semiconductors used in electronics and vehicles. It has also slowed down building completions in some countries due to lack of key supplies.

For example, in the second quarter of 2021 lumber prices in the United States were 120% higher than in January 2019, though have since cooled off. Steel prices in August 2021 were also more than 60% higher than in January 2019. In the United Kingdom, a survey of contractors indicated supply constraints for cement, electrical components, timber, steel and paints. Wages in the construction sector rose by up to 13% in the year to May 2021 in some markets, adding to project costs.

In the Net Zero Emissions by 2050 Scenario, the energy intensity of the global economy improves (that is, falls) by 35% by 2030. This is driven by energy efficiency combined with related measures such as electrification and behavioural change. This enables growth in clean energy sources, such as wind and solar generation, to outpace overall demand for energy services. In this scenario, the global economy grows by 40% by 2030, driven by higher populations and income levels, but uses 7% less energy.

Around 80% of the additional energy efficiency gains in the scenario over the next decade result in overall net cost savings to consumers, after accounting for both the initial cost of measures and lower operating costs. This helps lower energy bills and cushion the effects of price volatility. That is one reason why energy efficiency is front-loaded into the policy mix in the Net Zero Emissions by 2050 Scenario.

The electrification of transport, space and water heating and many industrial applications results in increased efficiency and lower emissions, but contributes to electricity generation rising by 40% by 2030 in the Net Zero Emissions by 2050 Scenario. Electric equipment is much more efficient than their equivalents powered directly by fossil fuels, with electric heat pumps, for example, being three to four times more efficient than burning fossil fuels for heat. Electricity can also be generated from renewable sources.

Behavioural change is also an important part of the scenario. These include adjusting temperatures for heating and cooling, switching transport modes, and increasing recycling.

The Net Zero Emissions by 2050 Scenario involves more than 40 energy efficiency milestones without which total final energy consumption would be around 30% higher by 2030. Most of these incorporate technologically mature solutions that can be scaled up very quickly.

In the scenario, energy efficiency actions in the buildings sector deliver some of the greatest energy savings through to 2030. Increasing the share of existing buildings that are zero carbon ready from less than 1% today to around 20% by 2030 is a key milestone, as is moving to no new sales of coal and oil boilers globally from 2025. Sales of gas boilers are also banned by 2025, except where gas supply is set to be decarbonised and boilers capable of burning 100% hydrogen or another low-carbon gas are classed as zero carbon ready.

For transport, increasing fuel efficiency standards of all vehicle types is important as even in the Net Zero Emissions by 2050 Scenario, 80% of passenger cars on the road in 2030 are still powered with internal combustion engines. Sales of heavier, less efficient SUVs reached more than 40% of global sales in 2020, while electric vehicles were just 5%. More than 20 countries have recently announced plans to phase out sales of internal combustion engine vehicles, with 2035 set as the milestone for this in the scenario.

Only industrial energy consumption rises by 2030 in the Net Zero Emissions by 2050 Scenario, increasing by around 8%. Even so, substantial progress is made in material and energy efficiency to enable the global economy to produce 9% more steel, 21% more chemicals and 5% more cement per year by 2030.

The road to net zero involves over 40 energy efficiency milestones 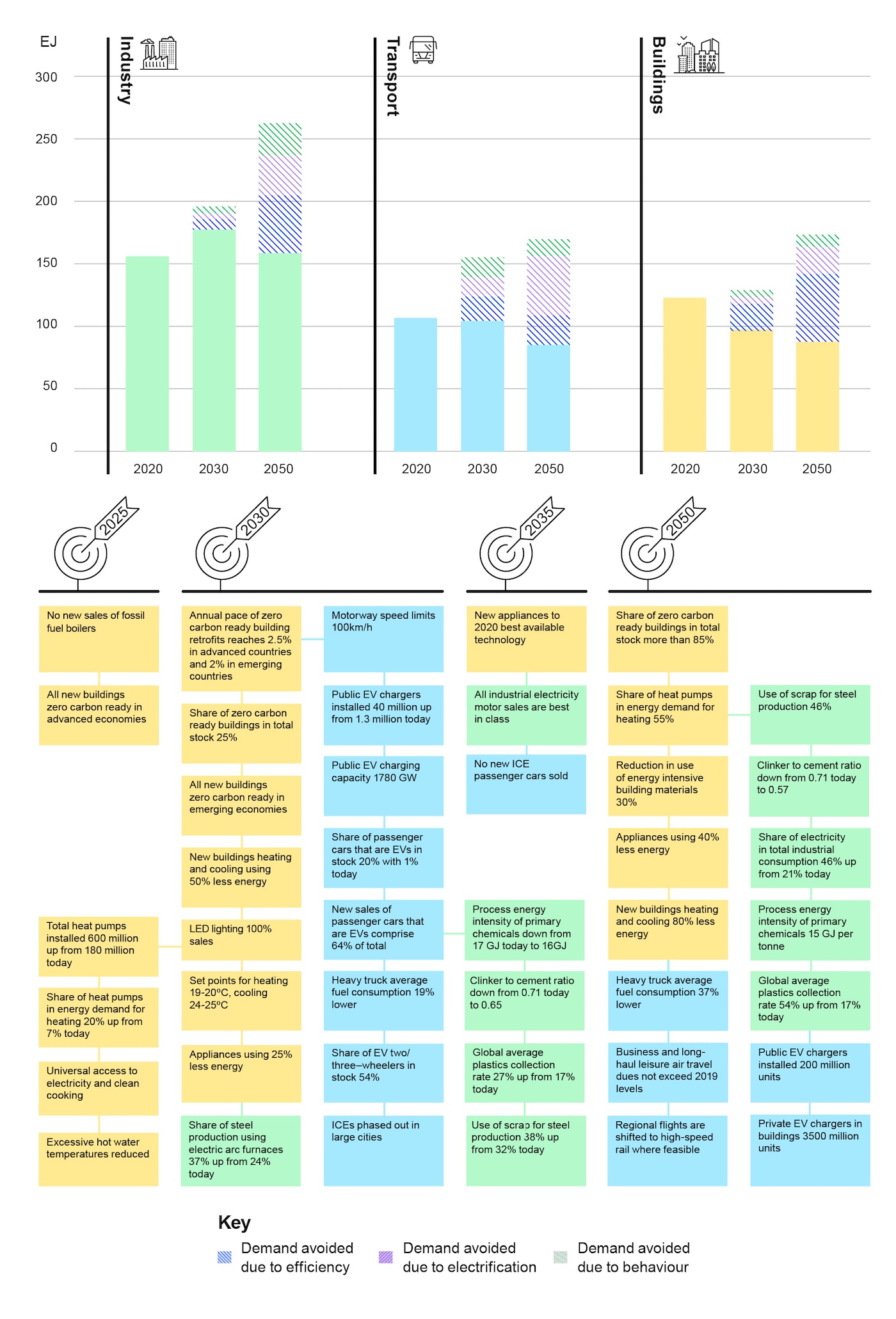 Over 120 countries have implemented or are developing mandatory standards and labels for key appliances. Such appliance efficiency policies have helped more than halve the energy consumption of major appliances in countries with the longest-running programmes. This includes air conditioners, refrigerators, lighting, televisions, washing machines and cooking appliances.

These huge gains have been achieved even as the purchase price of such appliances fell by an average of 2-3% per year. Thus consumers have benefited from both lower appliance purchase costs and lower operating costs.

However, reaching these results takes time, because once new standards are put in place it can be many years before the existing inefficient stock is replaced. This highlights the role of incentives and replacement programmes to remove old, less efficient equipment from use faster, especially in countries with less mature programmes.

An analysis of nine large countries and regions, including China, the European Union and the United States, shows that efficiency standards helped save about 1 500 TWh of electricity per year in 2018, equivalent to that year’s total generation from wind and solar in those countries.

In November 2021, the IEA and the COP26 presidency launched the COP26 Product Efficiency Call to Action to double the efficiency of key appliances and help make it quicker, easier, and cheaper to raise climate ambition. G7 leaders had previously welcomed the Call to Action at the 2021 G7 Summit in Cornwall, focusing on lighting, refrigerators, air conditioners and industrial motor systems which together account for over 40% of global electricity demand and over 5 Gt of global CO2 emissions a year. This is roughly equal to the United States’ current total CO2 emissions.

In 2021, the stock of connected appliances, devices and sensors is expected to overtake the number of people on the planet. Over the last five years the stock of connected appliances, devices and sensors has grown by an average of around 33% per year and is expected to reach 9 billion in 2021. Most of these are measuring devices, such as sensors and smart meters, with other devices achieving market take-off more recently. For example, deployment of smart appliances is expected to double from 2020-2021 and the number of smart lighting devices is approaching 1 billion.

These trends are helping expand the benefits of energy efficiency through improved measurement and enhanced control to enable greater participation in demand response. In the Net Zero Emissions by 2050 Scenario, more than 500 GW of demand response is brought to market by 2030 to support grid stability and to match demand to times when renewable sources is at its highest. Examples include, efficient hot water systems, smart charging of electric vehicles and other equipment incorporated into connected building energy systems. Building energy management systems have been shown to be able to deliver energy savings of 20% to 30%, arising from installing appliances that are more efficient and offer enhanced monitoring and control of energy use.

Technology innovation is also prompting policy innovation in several jurisdictions. For example, in 2021 California’s Public Utility Commission moved to introduce a new metric called total system benefit to provide incentives that recognise the wider system benefits from energy efficiency via its utility energy efficiency programmes. Several countries have also recently launched digital strategies which look to address risks such as increased device energy consumption, a lack of interoperability, cyber security, and social inequality due to unequal access to digital services. The IEA Digital Demand-Driven Electricity Networks Initiative is providing a platform for governments to learn from one another and apply best practices in these areas.