This project aims to understand how carbon dioxide (CO2) capture rates in power stations could be improved to eliminate residual emissions. Standard carbon capture technology today focuses on a maximum capture rate of only 90%. While this rate may be acceptable now, a target of zero emissions in coming decades will require capturing the remaining 10%.

How could this technology be explained to a high school student?

Producing electricity from coal, natural gas and biomass leads to emissions of CO2. Carbon capture technologies involve capturing the CO2 at power stations, transporting it to storage locations (usually deep underground) and isolating it there. These technologies are still at the demonstration/early commercial stage. This project aims to improve understanding of how the capture rate of CO2 emissions can be increased.

The project began in July 2017 and ended in April 2019. The main findings contained in the resulting technical report,  exposed the 90% capture rate as an artificial limit and found there were no technical barriers to increasing capture rates to over 99%. The increase in costs to achieve near-zero CO2 emissions from both coal and natural gas-fired power stations was found to be modest in comparison with the costs of achieving 90% capture. It is now essential that these results be validated by demonstration. Recognising the results from this study, some plant designers are now targeting capture rates well in excess of 90%.

Understanding how CO2 capture rates in power stations could be improved 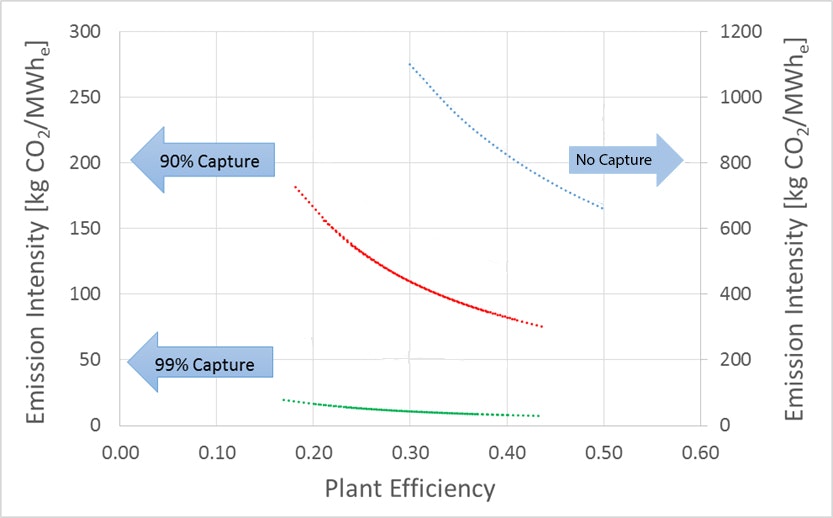 Direct CO2 emissions from coal-fired power stations with no capture, and at 90% and 99% capture rates. Credit: GHG TCP

The project was commissioned by the GHG TCP. The work was undertaken by CSIRO, Australia.

The project was funded by the GHG TCP.

Founded in 1991, the remit of the GHG TCP is to evaluate options and assess the progress of carbon capture and storage and other technologies that can reduce greenhouse gas emissions derived from the use of fossil fuels, biomass and waste. The aim of the TCP is to help accelerate energy technology innovation by ensuring that stakeholders from both the public and private sectors share knowledge, work collaboratively and, where appropriate, pool resources to deliver integrated and cost-effective solutions.