Air pollution has emerged as one of India’s gravest social and environmental problems in recent years. At the same time, the country is experiencing signs of a warming climate with potentially devastating effects in the long term. Energy-related fuel combustion is at the heart of both crises. It is a main source of three major air pollutants, NOX, SO2 and PM2.5, and the largest contributor to India’s CO2 emissions. In many locations, concentrations of particulate matter persistently exceed recommended national and international standards with severe implications for public health.

In 2019 alone, India experienced an estimated 1.2 million air pollution-related premature deaths. At the same time, India’s growing economy is driving CO2 emissions, which increased by more than 55% in the last decade, and are expected to rise by 50% to 2040. Today’s energy choices matter for future development, as they have direct and far-reaching implications for the lives of a growing population. Energy-related air pollutants and CO2 emissions often arise from the same sources, therefore the adoption of an integrated approach to tackle both can deliver important co-benefits.

This report shows that well designed, coherent policy packages can deliver such synergies if properly implemented. In order to demonstrate co-benefit potential, it provides quantitative analysis that presents the ways in which flagship energy policies can contribute to both air pollution reduction and climate change mitigation in tandem. Four key sectors are assessed for this purpose: captive power plants, industrial energy efficiency, road transport electrification and expanded access to clean cooking. Policy frameworks that accommodate these synergies will provide a more impactful response and deliver durable benefits to the most pressing national health and environmental challenges, while offering great potential for India’s contribution in the global fight against climate change.
This is an extract, full report available as PDF download
Download full report

Energy is at the centre of India’s environmental challenges 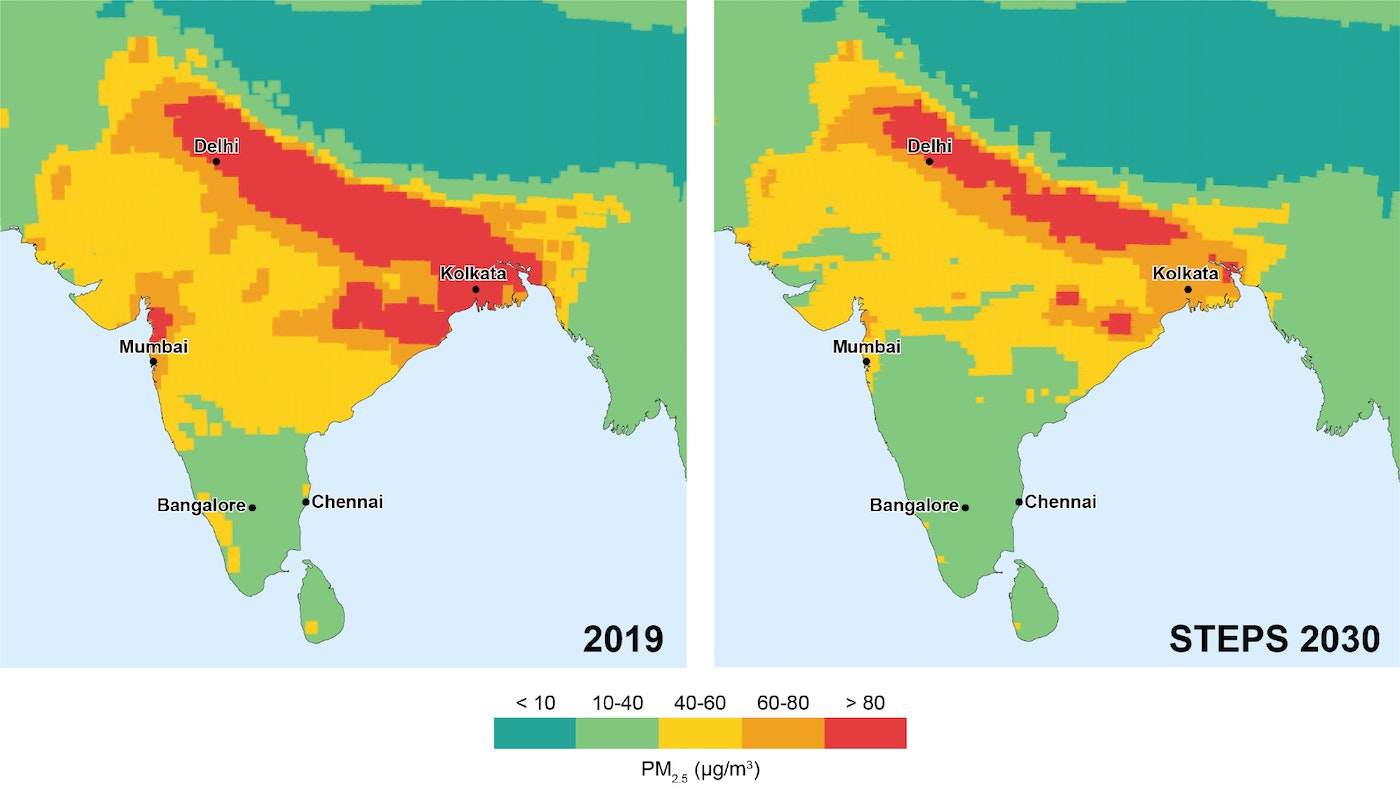 Energy use is at the heart of India’s air pollution and climate change challenges and today’s energy choices matter for future development, as they have direct and far-reaching implications for the lives of a growing and rapidly urbanising population. In the IEA’s Stated Policies Scenario, which reflects the impact of existing and today’s announced policy frameworks, India accounts for nearly one quarter of global energy demand growth to 2040, more than any other country over the same period. While enhancing economic prosperity, India’s increased energy requirements would entail substantial negative environmental externalities: in the coming years, India will become the largest contributor to global CO2 emissions growth. Addressing air pollution and curbing CO2 emissions in a timely and efficient way is vital for future, owing to its close linkage with socioeconomic and human development.

Given the complex nature of clean energy transitions, coherent policy packages are needed to deliver the necessary rate of change across the entire energy system. Energy-related air pollutant and CO2 emissions arise from the same sources. Thus, if well designed, energy policies that seek to tackle air pollution or climate change can deliver important co-benefits for other targets.

In the power sector, IEA analysis finds that a timely and full implementation of the 2015 emissions standards notification for thermal power plants is crucial if India is to reduce air pollutants in the short term. The installation of emissions control technologies in thermal power plants would enable a 95% reduction in combustion-related emissions of SO2 and an 80% reduction in PM2.5 emissions from the power sector by 2030 compared to 2019 levels. Strong renewables deployment could further abate air pollutants and mitigate CO2 emissions in the long-run.

Captive power plants, also known as auto-producers, are employed by heavy industry and service companies to generate electricity in the face of concerns regarding cost and reliability of grid supply. This fossil-fuel intensive sector is understood to make up around 14% of India’s power supply in 2019, and with its greater share of coal and oil use, accounted for 16-18% of all power-related CO2 and air pollution emissions. To meet India’s decarbonisation targets, the power sector is expected to shift away from coal towards cleaner sources of power. While the government has introduced stricter pollution limits, the majority of thermal power plants are unlikely to meet the air pollution standards by the mid-2020s.

Even if the captive power sector continues to rely on coal at 2019 levels (87%), full implementation of emission control measures until 2030 would result in significant reductions of SO2, NOX and PM2.5 emissions by 2040, despite strong growth in generation. Should solar PV provide one third of captive power supply in 2040, similar to its share in the national mix if current targets are met, PM2.5 and NOX emissions would be reduced by another half. Failing to implement air pollution control technologies, however, would see emissions across all air pollutants more than doubling and SO2 emissions reaching more than 1.5 Mt in 2040, a level 16 times higher than under the implementation of emission control measures. Given its scale and strong reliance on fossil fuels, the captive power segment must be included in all power-sector policy decisions if India seeks to accomplish both a power sector transition and industrial development.

Supported by a range of economic development policies, the contribution of industry to gross domestic product nearly quadrupled over the past two decades resulting in significant energy demand growth in the sector. By 2019, industry was India’s main energy-consuming sector, accounting for more than one third of total final energy consumption, with three sectors, iron and steel, chemicals and cement accounting for almost 45%. IEA projects that strong growth in economic output could more than double industry energy demand by 2040, increasing the sector’s share of final energy consumption to 40%.

India’s Bureau of Energy Efficiency estimates that the industry sector could contribute 60% of possible energy savings until 2031 and several programmes have been introduced to meet this target. The Perform, Achieve and Trade (PAT) scheme is the cornerstone of these efforts. Established in 2012, the first PAT cycle targeted large energy-intensive industries. Following initial success, the scheme was extended, and phases PAT II-VI have been rolled out annually in two-year cycles since 2016. By improving energy efficiency and avoiding additional energy consumption in industry, the PAT scheme indirectly delivers environmental benefits as lower energy consumption results in fewer CO2 and air pollutant emissions. Nonetheless, it could be argued that the PAT scheme was not ambitious enough and targets could be set higher, such as by means of benchmark setting as well as broader coverage of large energy consumers and sectors.

IEA analysis estimates that a continued and expanded PAT scheme could result in more than 80 Mt of avoided CO2 emissions in 2030 and 265 Mt CO2 in 2040, of which iron and steel would contribute about 70% and cement more than a quarter. Converting the PAT scheme’s energy saving to carbon saving certificates could further trigger fuel switching, which would contribute additional CO2 emissions reductions. Furthermore, expanding the PAT scheme could save more than 10% SO2 and NOX pollution from large industry by 2040.

The past two decades have seen seven-fold increase in the number of passenger cars on India’s roads leading to significant increases in urban air pollution levels and associated health problems. In response, India has adopted tighter emissions standards (Bharat Stage VI) effective for all vehicles manufactured after March 2020 and introduced the ambition to reach a 30%-share of EVs in total vehicle sales by 2030.

Growing demand for road transport sees projected emissions from the sector rising to more than 450 Mt CO2 by 2030, and almost 600 Mt CO2 by 2040. Furthermore, the growing use of EVs leads to indirect emissions in the power sector. While these emissions amounted to less than 0.5 Mt CO2 in 2019, their importance is expected to grow with the uptake of EVs. By 2030, CO2 emitted by EV electricity consumption could reach 20 Mt CO2, and more than double by 2040. The speed at which the power sector reduces its CO2 intensity is closely related to the net mitigation potential of large-scale EV deployment. A power mix that remains as carbon-intensive in 2040 as it was in 2019 could lead to the EV fleet emitting 20Mt CO2 more than an equivalent fleet of conventional cars, while decarbonising the power mix as currently planned could deliver savings of more than 35 Mt CO2.

Around 660 million people, just under half of India’s population, relied primarily on traditional use of biomass for cooking and heating in 2019. Burned indoors in poorly ventilated spaces, these fuels directly expose households to indoor air pollution, often with severe consequences for their health. A quarter of the almost 2.5 million premature death cases resulting from indoor air pollution globally occurred in India. Over the past decade, the country developed a comprehensive policy framework to promote clean cooking solutions notably targeting poor, rural households resulting in the share of the population relying on biomass, kerosene or coal declining by almost 20% over the period 2010-19, with half of the total population using cleaner fuels such as LPG.

Heavy reliance on traditional biomass for cooking and heating results in high levels of harmful PM2.5 pollution and to a lesser extent contributes to NOX and SO2 emissions. Indoor air pollution occurs disproportionately in rural areas, where more than 90% of the population live without access to clean cooking. Stated policy efforts to improve access to clean cooking fuel are expected to reduce the share of the population using traditional biomass to less than 25% and enable a 40% reduction in indoor particulate matter air pollution by 2040. Replacing traditional biomass with LPG would increase CO2, but reduce methane emissions and could avoid a substantial amount of black carbon, a potent climate forcer. Nonetheless, the high inequality in geographical distribution would remain, with 95% of India’s population without clean cooking access living in rural areas in the future.

Fully shifting away from highly polluting to clean cooking fuels by 2030 would almost entirely remove indoor PM2.5 emissions and reduce associated premature deaths to 0.1 million cases annually. Efforts to increase the availability and affordability of LPG in rural areas are needed along with improved gas stove availability and gas distribution infrastructure in urban areas. In major cities, overcoming reliability issues and improving the wattage of supply through investments in the power distribution infrastructure would allow electricity to actively contribute to clean cooking access in high- and middle-income urban areas. Finally, regional diversity will require policy makers to understand and account for geographic and cultural differences or similarities, and design solutions to improve access to cooking energy accordingly.

Present analysis of India’s energy and climate policies shows that current air pollution and climate measures, if fully implemented, could improve air quality but remain insufficient to deliver the levels recommended by the World Health Organisation. A wholly integrated policy response could enable additional, technical savings of 3.2 Mt SO2, 5.1 Mt NOX and 4.2 Mt PM2.5 in 2040, of which more than two-thirds would be realised by stricter air pollution measures. Policy makers must recognise that in many sectors, there are synergies between air pollution and climate policy objectives. Otherwise, benefits from both air pollution and climate policy measures will be undervalued. Acknowledging these synergies in the design and implementation of future policy frameworks will provide a more impactful response to the most pressing national health and environmental challenges and offer great potential for India’s contribution in the global fight against climate change.