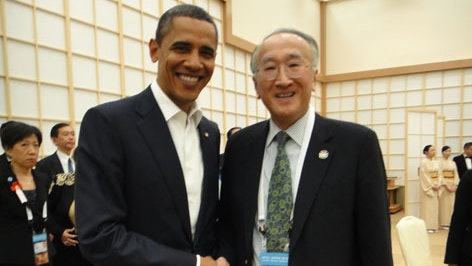 The summit was held 13-14 November on the sidelines of the Asia-Pacific Economic Co-operation forum, with 800 leaders from politics and business discussing further economic integration of the Asia-Pacific region and energy and environmental issues in the region.

The event featured keynotes from a number of world leaders attending the APEC forum, including US President Barack Obama and Chinese President Hu Jintao.

Mr. Tanaka joined the discussion on global environment and growth and showed the latest data from the World Energy Outlook 2010 publication while making a call for a technology revolution and stressing the need for action in all low-carbon technologies.

President Calderon Hinojosa of Mexico agreed to Mr. Tanaka's call for action now rather than waiting for a future deal in climate negotiations.

In response to Mr. Tanakas explanation of the IEA's contribution to G20 work on fossil fuel subsidy, US President Obama said he is very happy with the IEA's work.

The clean energy economy is gaining ground, but greater efforts are needed now to get on track for net zero by 2050